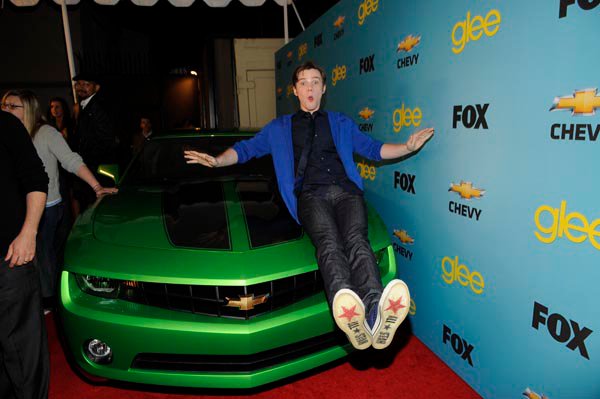 GLEE's Chris Colfero on the hood of a Chevrolet Camaro

If you've ever watched Glee, you already know that it's TV's equivalent of a Britney Spears pop song: slick, snappy, slightly outrageous, and impossible to shake off. It's kind of like Ally McBeal, but set in a high school, with jazz hands instead of dancing babies. And most importantly for advertisers, it has completely, utterly captivated TV viewers around the globe.

Glee may not have the sheer numbers of American Idol, but what it lacks in viewer quantity it makes up for in quality: here in the U.S., Glee has drawn the wealthiest viewership in primetime. In other words, among viewers age 18 to 49 from households with incomes over $100,000, more watch Glee than any other primetime network show. That's very, very attractive to advertisers like Chevrolet -- which may explain why Chevy has been a major sponsor of the show since its debut last fall.

Frankly, Chevrolet seems like a great match for the Glee demographic. The Chevy lineup is well-suited for that age range -- not just affordable, youth-oriented models like the Cobalt, the HHR, and of course, the Camaro, but also sleek, aspirational rides like the Corvette. We don't have metrics to measure the effectiveness of Chevorlet's sponsorship of the program, but we know that the bow-tie has been prominently featured in teasers leading up to tonight's return of the series after its four-month hiatus, and we know that Chevrolet was a major underwriter of last weekend's Glee Spring Premiere Soiree driven by Chevy. So clearly, something good is going on.

For your viewing pleasure, here's a clip from Glee's series' premiere party last fall, which was also underwritten by Chevrolet. Glee returns tonight at the very strange time of 9:28 ET (seriously) on Fox.