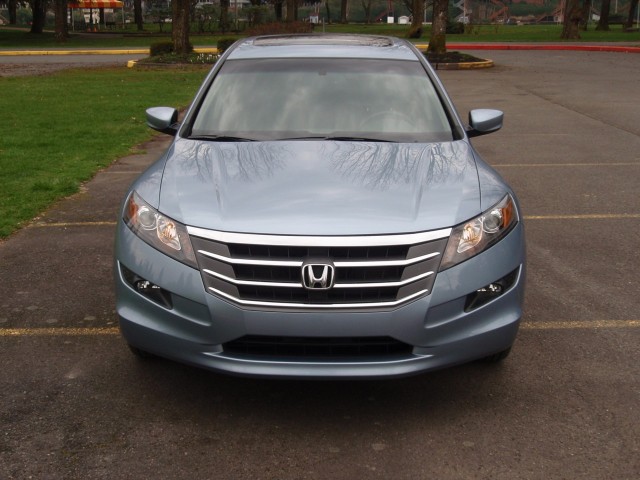 The 2010 Honda Crosstour is an unusual beast—so unusual that the first time you see one you'll likely stand back, size it up, and scratch your head a bit, as we saw people do time and time again when we drove one for a week recently.

Then you're probably going to say something along the lines of, "I love it!" or "I don't see the point." Yes, it's that polarizing.

There's also the issue that, yes, the Crosstour's proportions tend to look slightly…goofy, for lack of a better word, at first glance. But with a few walkarounds and the time to let the design settle, it works surprisingly well, and grew on this reviewer even if the purpose didn't. Despite what some other reviewers have said, we think the blunt grille and rather aggressive front-end styling go together quite well with the also very upright tail. And the Crosstour's unusual roofline? You'll warm up to it.

If a few things don't bother you, that is. In back, the roofline not only curves downward but also inward, making it surprisingly confining for headroom (although it's actually okay for six-footers). In the cargo area the low roofline takes its toll on usability; there's not really enough height for a medium-size dog kennel, and at about two and a half feet wide at its narrowest point, between the intrusive strut towers, you'll be hard-pressed to fit a smallish dresser back there. And the rearward visibility is difficult, if you don't use some help from the rear camera system that comes with the optional nav system.

Get behind the wheel, and you'll find that the 2010 Crosstour drives somewhat like the Accord sedan but with a heavier, more deliberate feel that's a step in the opposite direction of the nimble feel we've praised the Accord sedan for in the past. The 271-horsepower, 3.5-liter V-6 moves the Crosstour plenty quick, but you're going to feel that weight in stop-and-go traffic. It steers well and has reasonably good body control on a curvy road, but there's quite a bit more fore-aft motion during hard braking or strong acceleration than we remember from the Accord. The transmission hesitates to downshift when coming out of a corner, yet it holds lower gears for longer than needed during light acceleration. There's no manumatic function in the Crosstour—either in terms of steering-wheel paddles or a separate shift gate—so it's apparent Honda isn't counting on buyers being hotfoots or picking the Crosstour as a substitute for, say, an Acura RDX.

You're also not likely to see mileage figures much better than the Pilot SUV. Over a week and about 120 miles of suburban errand-running, we barely managed 19 mpg in the Crosstour (the EPA rating is 18 mpg city, 27 highway with FWD, 17/25 with AWD). The Toyota Venza is offered with a base 182-horsepower, 2.7-liter four-cylinder engine in addition to a 268-hp V-6, but the Accord Crosstour is only offered in V-6 form.

While it weighs about the same as its primary rival, the Toyota Venza, the 2010 Honda Crosstour is about 300 pounds heavier than a V-6 Accord sedan and an eyebrow-raising 650 pounds heavier than a four-cylinder Accord sedan. The Accord Crosstour is 7.6 inches higher than the Accord sedan and rides a couple of inches higher, though its six inches of official ground clearance are about the same as the sedan's.

If you can't already tell (full disclosure here), this reviewer had a hard time getting into the mindset of a proper Crosstour owner. As a 30-something without kids, I have to confess I fell a bit into the "don't see the point" response above. If you need to haul a lot of 'stuff' on the weekends, why not get a more upright utility vehicle like an Element or a Pilot? And for those who want more utility and sport with less compromise, it might make sense to wait around a little longer for the 2011 Acura TSX wagon.

Looking for the CliffsNotes? The key, styling aside, to understanding the Crosstour is the H-point. Nothing to do with a G-spot, it's used to determine the height at which your hip joint rests in the driver's seat. And in the case of the Accord Crosstour, it's a bit higher, which makes it easier for older, arthritic folks to get in or out. With excellent soft and supportive leather seats in our top-of-the-line Crosstour EX-L front-wheel drive model, it translates to excellent comfort and a nice driving position.

Curiously, the size of the driver seems to have a lot to do with whether or not the Crosstour works. Shorter drivers are likely to look rearward, over the top of the back seats, and see vast swaths of headliner; but if you're on the tall side, as this driver, you probably won't find it as much of an issue, especially as Honda has added the small, lower back window (a la Insight and CRX) that's of help in parking.

Utility, while not great because of the roofline, is reasonably good. For those who frequently want to fold the back seats forward, the mechanism is easy to reach and doesn't involve running around and opening back doors; and there's an underfloor storage compartment/tub, done in easy-clean plastic, that could fit everything from muddy boots to a diaper bag.

Ahead of the front seats, you essentially get the same interior as in Accord sedans. The instrument panel is a bit on the cluttered side, and audio and climate controls can be difficult to figure out in the dark, but we like the materials and tactility of the knobs and buttons. Center console compartments feel strong and sturdy, and there are several small cubbies in front for the driver.

Dual-zone climate control, cruise control, a 360-watt sound system, and a tilt/telescopic steering wheel with audio controls are included in all Crosstours, while the EX-L, as tested at $35,480, included leather upholstery, front heated seats, a HomeLink garage-door opener, and heated mirrors, among many additional features, plus the navigation system with rearview camera system.

If the idea of a sedan-like ride and a slightly higher driving position—plus, possibly, a little more cargo utility—sounds like a compelling formula, take another look inside. Then again, size it up from the outside. You just might like what you see.