A Great Ad For Good Friday: Kia's New Clip For The 2011 Sorento 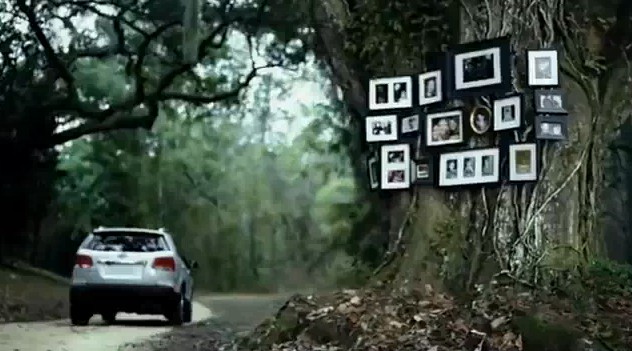 Screencap from an ad for the 2011 Kia Sorento

Screencap from an ad for the 2011 Kia Sorento

The problem with most car commercials is that they try to do too much. They have narrators rattling off features, bullet points touting even more features, the requisite "Do not attempt. Professional driver on a closed course" pasted at the bottom of the screen, and catchy-but-distracting indie tunes playing in the background. Upper-management may love to see all that hoo-ha crammed into 30 seconds, but it's way too for most viewers to take in.

The best ads -- the ones that really stand out -- are those that make their points graphically, creating emotional impact without using much language at all. Remember the "Go Far" commercial for Toyota's hybrid synergy drive? Or that unforgettable Volkswagen Cabrio clip called "Milky Way"? Those commercials left a lasting impression without telling you that they were leaving a lasting impression.

Kia's latest ad for the 2011 Sorento fits that description, too, pairing strong visuals with very minimal text. Equally interesting is the fact that, instead of relying on typical images of the SUV as a rugged off-roading machine, the Sorento is made to look like home. (Though considering commute times these days, that's not far off the mark for some folks.)

Like Kia's "Hamster" spot for the 2010 Soul -- which took top honors at the 2010 Nielsen Automotive Ad Awards -- the Sorento "Home" clip was created by David&Goliath agency, under the watchful eye of chief creative officer David Angelo. Is it edgiest ad on television? Probably not, but our very unscientific office poll reveals that two out of three viewers prefer it to the hamster clip anyway. And it's a great way to end Good Friday.