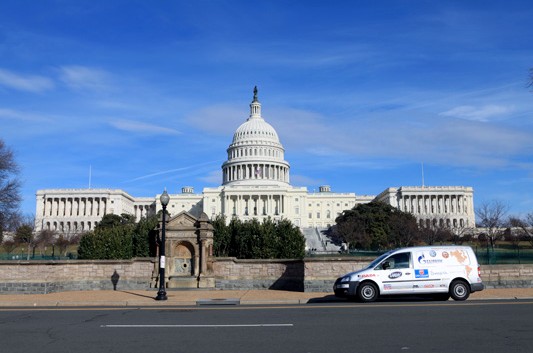 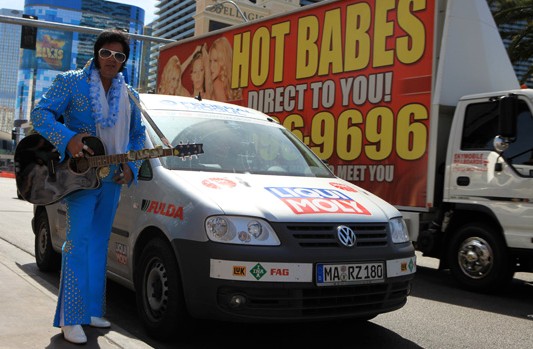 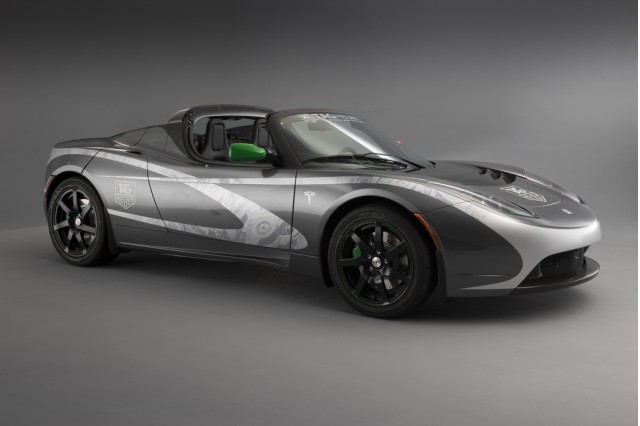 Last week, we covered the kick-off of Tesla's round-the-world tour, featuring a special-edition 2010 Tesla Roadster designed by luxury watchmaker TAG Heuer. The high-profile stunt is designed to show that Tesla's all-electric Roadster has plenty of range, and that it can circumnavigate the globe without using a single drop of gas. But the Roadster isn't alone on either of those fronts: there's another long-distance drive currently underway that has turned its back on gasoline, and it features a much more humble Volkswagen.

The drive is one of the longest on Planet Earth: the legendary Panamericana, or Pan-American Highway. It's being carried out by Rainer Zeitlow in a Volkswagen Caddy Maxi EcoFuel, which runs entirely on compressed natural gas (CNG). Between October 5 and November 3, 2009, Zeitlow drove the VW from Portugal to Japan along the Amur Transcontinental. He began the Panamericana trip just two months later, on January 2, in South America's southernmost CNG station in Rio Grande, Argentina.

After nearly three months and a couple of long side trips into Brazil and America's eastern seaboard, Zeitlow has nearly finished his run through the Americas. He hit San Francisco on Friday, and he aims to wrap up the journey a week from Thursday, on April 2, when he motors into North America's northernmost CNG station in Barrow, Alaska. In all, Zeitlow will have covered some 24,855 miles on the two excursions.

So, what's our take?

As pure spectacle, it's fantastic. We love a good rally, even if there's only one competitor. And alternative fuels are exciting, too -- even though they may be worse for the environment and the economy than good old-fashioned gasoline. Still, as tech geeks, we like to watch the tests anyway.

Unfortunately, CNG doesn't seem like an especially viable alternative fuel for most consumers -- despite T. Boone Pickens' efforts to prove that it is. He may be right when it comes to commercial hauling fleets and mass transit, but for most passenger vehicles, the future looks more like the all-electric one proposed by Tesla. In fact, it may look more like the all-electric one proposed by Honda, GM and others, thanks to vehicles powered by hydrogen fuel cells.

We say that for a variety of reasons, not the least of which is that hydrogen fuel cell technology relies on easily renewable resources (e.g. water) and produces zero carbon emissions, which are stated goals of many automakers, governments, and political groups these days. True, the hydrogen infrastructure is expensive to create -- around $2 million per fueling station to start -- but after that initial investment, the costs begin to trail off. Skeptics say that hydrogen will never be a viable source of energy because it's so difficult and expensive to create, and that could be true. But no matter where the electricity to power EV batteries comes from, the industry seems poised to transition away from vehicles that run directly on fossil fuels and toward those powered by batteries.

CNG, on the other hand, is expensive to recover, and it's not likely to become any less so over time. Furthermore, it's a limited resource, and limited resources always come with high costs -- politically, socially, environmentally, and economically. (Though it's only fair to point out that the lithium used in lithium ion batteries is even more limited than natural gas, and the mother-lode seems to be in Bolivia; in other words, until new battery tech rolls out, the politics of  battery-powered vehicles will be tricky, too.) Finally, CNG vehicles aren't zero-emission. They're far cleaner than gasoline-powered rides, but they're not perfect.

For more info about Zeitlow's journey, we've posted the latest release below. You can also check the EcoFuel Transamerica website for photos, videos, and diary entries about the trip.

CENTURY CITY, Calif., March 19 /PRNewswire/ -- Legendary long-distance natural gas driver Rainer Zietlow made a pit stop in Los Angeles yesterday at the Century Plaza Hotel to speak with journalists and alternative fuel industry stakeholders about his natural-gas marathon tour, the longest in the world. Zietlow plans on completing the Transamerican tour by motoring into Barrow, Alaska during the first week of April.  Remarkably, the entire tour will be powered exclusively by compressed natural gas (CNG).

Zietlow began stage one of his world tour by first driving from the Atlantic Ocean (Lisbon, Portugal) to the Pacific Ocean (ending in Tokyo).  Stage two consists of a drive from Tierra del Fuego to Alaska. By the end of this road trip, spanning over 24,855 miles, Zietlow and his team will have driven the world's two longest roads – Russia's "Amur Transcontinental" and the "Panamericana" –-all of it in Volkswagen Caddy Maxi EcoFuel, and all without gasoline.

The current leg of the marathon tour, the "EcoFuel-TransAmericana," runs along the legendary "Panamericana." With its 15,534 miles, the longest and most famous road of the world bisects the American double continent. The starter's gun fired on January 2, 2010, in Rio Grande, Argentina at the southernmost natural gas fuel station in the world and will end in Alaska at the world's northernmost natural gas fuel station.  The vehicle transporting this ambitious team is the VW Caddy Maxi EcoFuel, the new "natural gas long-distance champion." No other series vehicle can drive 600 kilometers using natural gas only.

Holding two places in the Guinness Book of World Records for his auto adventures, it is natural that Zietlow would partner with another leader in the global natural gas equipment industry.  A newcomer to the United States, but certainly not to the natural gas market, the Landi Renzo Group has been in the business of sustainable mobility for more than 50 years with a presence in over 50 countries worldwide. Landi Renzo is a global leader in the design and manufacture of systems for liquefied petroleum gas and compressed natural gas vehicles.  Andrea Landi, President of Landi Renzo USA, joined the lunch and commented on their support of Zeitlow's mission. "We share a spirit of adventure as a pioneer in this sector." Landi Renzo recently chose Torrance, California as the headquarters for Landi Renzo USA, and operations will commence at that location in April 2010.  "Innovation is at the core of our philosophy. We want to contribute the benefits of our global experience by take a leading role in building a new future."