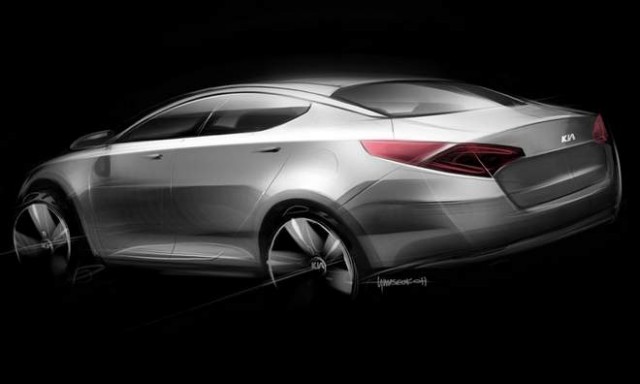 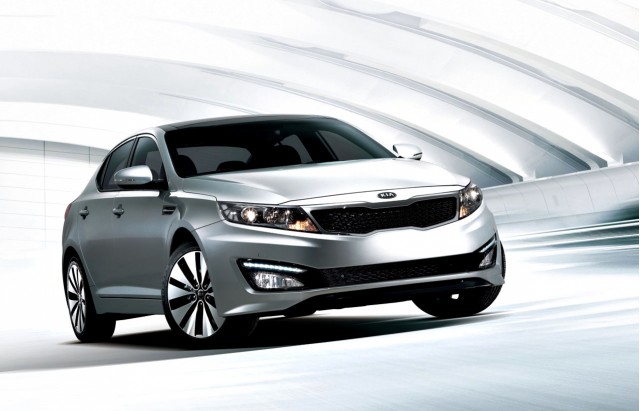 We've been teased a few times with sketches of the 2011 Kia Optima, but today we've got the real thing live from the upcoming 2010 New York Auto Show, with an on-sale date expected for the fall.

The current Optima's more typical of the last generation of Kia cars: functional but unexciting. In our Bottom Line on the 2010 Optima, we applaud its practicality but point out its plain, pragmatic look. 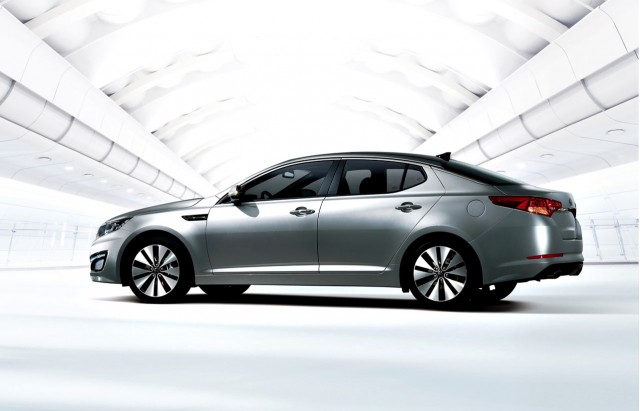 The new one? We're impressed so far with the attractive, forceful lines shown in these manufacturer-released photos. There's some Ford Fusion in the front end, some Charger from the side, and the big concept-car wheels look like direct homages to Volkswagen. Blended together, the new Optima looks ready to fit right in along with the 2010 Soul and Forte as the brand dials up its own distinct styling theme.

Kia says the new Optima will be longer, wider and lower than before. Our prediction: it'll be within millimeters of the 2011 Hyundai Sonata in most dimensions. It will share the Sonata's powertrains, as well as some other underpinnings: Kia says its 2.4-liter direct-injection four-cylinder will be joined by a turbocharged four and a hybrid edition soon, matching the 2011 Sonata Hybrid and 2.0T shown at the 2010 New York auto show.

Kia's also hinted at an even greener version to come, with its Ray plug-in hybrid concept at the recent 2010 Chicago auto show.

Count on top-rated safety as well, since the sister Sonata's just earned the Insurance Institute for Highway Safety (IIHS) "Top Safety Pick."Three trim levels will be offered: LX, EX and SX. Entertainment options will include UVO, the multimedia controller that Microsoft sells to Ford as SYNC; satellite radio; USB connectivity; and a navigation system.

The 2011 Kia Optima will go on sale this fall. Though it hasn't been officially stated, it's sure to join the 2011 Kia Sorento at the company's new West Point, Ga., assembly plant, in the near future. The facility's less than 100 miles from the Hyundai plant in Alabama that builds the Sonata and the Santa Fe crossover, and a nearby four-cylinder engine factory recently opened by the Korean conglomerate. However, like the Hyundai Sonata Hybrid, the Kia Optima hybrid likely will be assembled in South Korea, where its lithium-polymer battery packs and motors are engineered.