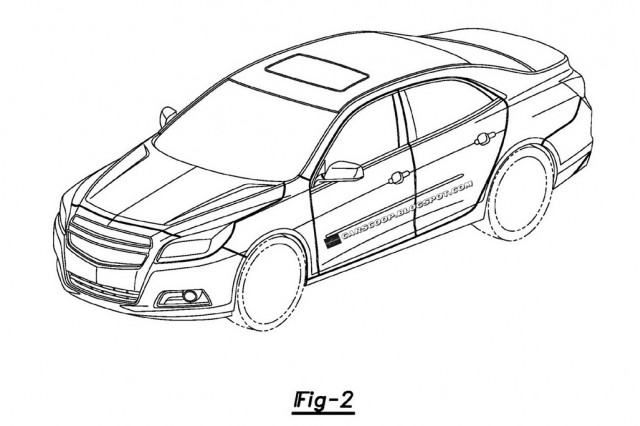 One of America's strongest mainstream mid-size sedans, the Chevrolet Malibu, is confirmed to be getting ready for a revamp both inside and out for the 2012 model year. The updated car will feature new lines, new powertrains, and better fuel efficiency. The three are all related, however, and not just piecemeal upgrades.

The new look has been revealed today thanks to the leak of these official patent drawings via the United States Patent and Trademark Office. The 2012 Chevrolet Malibu appears more aerodynamic than the current model, and therefore more fuel-efficient. It also has a much more edgy look that gives it an almost premium appearance.

The Malibu’s future powertrains are likely to have been designed with efficiency in mind as well, all leading to a BMW EfficientDynamics-like (or even GM's own XFE, or Xtra Fuel Economy) package that combines many small elements to form a greater sum.

Inside, the car should also get a refreshing, with new integrated air vents, an updated dash and a more refined navigation system with a larger, clearer screen all expected to make the cut.
Due for the 2012 model year, meaning most likely a debut in mid-to-late next year, the new Malibu would serve as an update to the seventh generation vehicle debuted in 2008.

That makes for a rather thorough mid-cycle refresh of an already successful and well-liked car, but initial takes on the styling revealed in these renderings are positive, so it could just be that GM is improving on an already good thing.