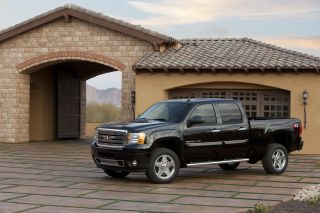 ST. LOUIS--While in St. Louis for the National Truck Equipment Association show, we spent a few minutes with Rick Spina, the vehicle line executive for full-size trucks for General Motors. We chatted about the new 2011 Chevrolet Silverado and 2011 GMC Sierra HD heavy-duty trucks, the market, and the "green" future.

Q. Why is GM offering a Denali model on the Sierra HD for the first time?

A. "What we're seeing is increased customization," Spina said. He said customers wanted a Denali model, and that extending the Denali moniker to Sierras made sense, since Denali has become a GMC subbrand, one that has proven very popular with customers.

Q. If I am a truck buyer, why should I choose Sierra over Silverado?

A.  "It's the way we package the features together and the appearance."

Q. How important is the Sierra HD to the GMC channel as a whole?

A. "It's incredibly important," Spina said. "Sierra and Sierra HD are cornerstones of that branding."

Q. How do you feel about your chances in the market, given that Ford and Dodge have new, competitive heavy-duty trucks?

A. "Actually feel really good about it," Spina said. "I liken this a little bit to 'we're headed into the playoffs.'"

Q. What is the future of "green" focus when it comes to GM and heavy-duty trucks?

A. "The simple answer...we're just trying to focus on the core fuel economy of the vehicle," Spina said. He also noted that GM can't "sacrifice" capability in order to make trucks "greener."