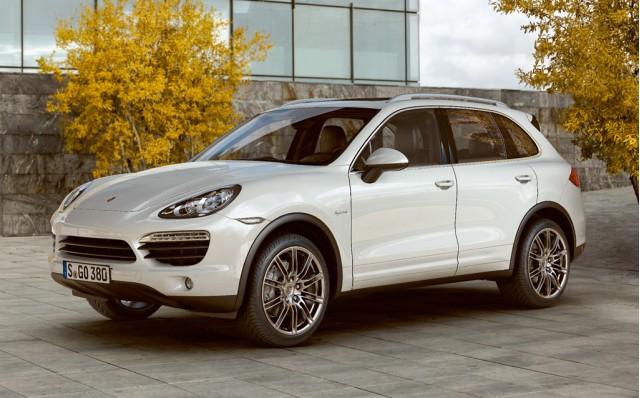 Porsche has released much more information about its next-generation Cayenne SUV, which will make its initial debut in Geneva next week, then be shown at the New York Auto Show about a month later.

A new full hybrid Cayenne Hybrid S model, along with major weight savings and improved fuel economy (and better performance) across the line is the big news for the 2011 Cayenne.

Like the still-related next-gen Volkswagen Touareg and Touareg Hybrid, the new Cayenne loses about 400 pounds, thanks to the use of lighter-weight materials and a new all-wheel drive system.

Compared to the previous Cayenne, the new 2011 Cayenne is only slightly larger overall, with less than two inches of added length and wheelbase. That should translate mostly to greater backseat space, which was always surprisingly lacking in the current-generation Cayenne five-seater. Porsche assures us that in the new version the backrest in back can be adjusted to three different rakes while the bench can slide fore and aft 6.3 inches.

Other highlights of the interior include a new small high-res TFT screen that’s part of the gauge cluster and includes radio station or nav-system directions.

The new base engine on the Cayenne will be a 3.6-liter V-6, making 300 horsepower and tied to an eight-speed ‘Tiptronic’ S automatic transmission, which of course includes manual control. Next up is the 4.8-liter V-8 in the Cayenne S, now up 15 hp to 400 hp, while the top of the line remains the Cayenne Turbo, which gets a 500-hp, 4.8-liter twin-turbo V-8.

Each of these models get the Automatic Start Stop function that Porsche introduced in the Panamera, but we don’t know yet whether as with the Panamera the feature will have to be toggled on every time the driver gets in. Across the board, Porsche reports that fuel efficiency is much improved. The V-6 model uses 20 percent less fuel in the European driving cycle than its predecessor, the automaker says, while both of the V-8 engines use 23 percent less fuel.

Although the Cayenne Turbo will no doubt remain the must-have model for enthusiasts who plan to enjoy the most bragging rights and weekend track ability, the all-new Cayenne S Hybrid promises performance on par with the Cayenne S but with the fuel economy of a V-6. That’s accomplished with the combination of a 333-horsepower, 3.0-liter supercharged V-6 engine, paired with a 47-hp (34-kW) electric motor; the two combined can crank out 427 pound-feet of torque at 1,000 rpm.

Porsche says that, at 193 grams of carbon dioxide emitted per kilometer (a figure that surely means more to Europeans), the Cayenne S Hybrid is the cleanest vehicle in Porsche’s entire model line.

The Cayenne Hybrid and the base Cayenne won’t be available until later this fall, but both V-8-powered 2011 Porsche Cayenne models will go on sale beginning in July.