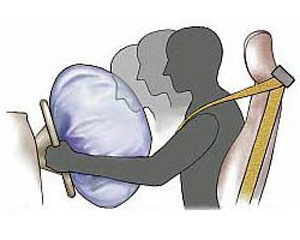 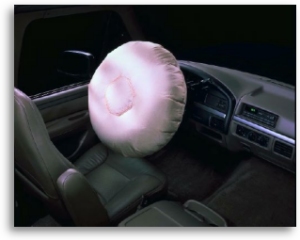 Carmakers can’t be sued for not installing airbags like the one on this ’95 Bronco, says the Supreme Court.

We always think of safety features as progressing forward, but that isn't always the case. In a new research paper, the Insurance Institute for Highway Safety suggests that the latest generation of frontal airbags isn't doing as good of a job protecting drivers who have belted up as the generation of bags before it.

After adjusting the data for other factors, like vehicle age, the IIHS found, actually, that belted drivers tend to fare better in vehicles that weren't certified to the latest airbag safety standard.

What's changed with the newer generation of bags? For one, they deploy with less force, the IIHS says. In part to solve issues in the 1990s with airbags killing or seriously injuring small children or small adults, or people too close to the wheel, airbags were depowered

Beginning with 2003, airbags followed more advanced 'tailored deployment' patterns—like dual-stage bags—that depended on weight sensors, seat position sensors, or seatbelts to either deploy in a gentler way or not at all if the passenger is smaller or out of position. Meanwhile, crash-test speeds have risen from 30 to 35 mph for frontal tests, beginning with 2007-model-year vehicles.

Overall, the study found that unbelted male drivers had a 38-percent lower death rate in vehicles with advanced airbag features while belted drivers overall had a 21-percent higher risk of death with the newer designs.

Researchers weren't sure if the trend is due to the stronger deployment required for the higher test speeds or if it's the range of considerations for out-of-position occupants.

"Perhaps air bags were suppressed in situations where they could be beneficial or were overly aggressive due to re-introduction of rigid-barrier tests for unbelted occupants," the authors said.

The newest airbags appear to provide suboptimal protection for drivers who buckle up compared with the airbags that preceded them," said IIHS president Adrian Lund. "It's a surprising finding."

The study is only based on 121 cases, mostly covering 2000-2003 models in crashes involving the death of a belted driver or front passenger. The IIHS paper includes a list of the study vehicles, breaking them down into model years when advanced features were phased in, along with when they were certified to the latest standard.