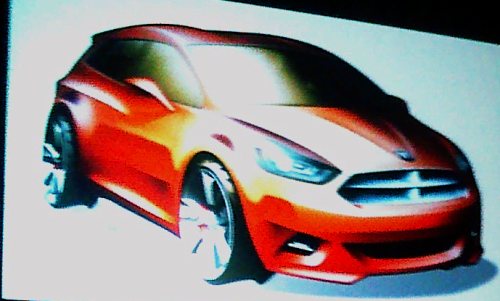 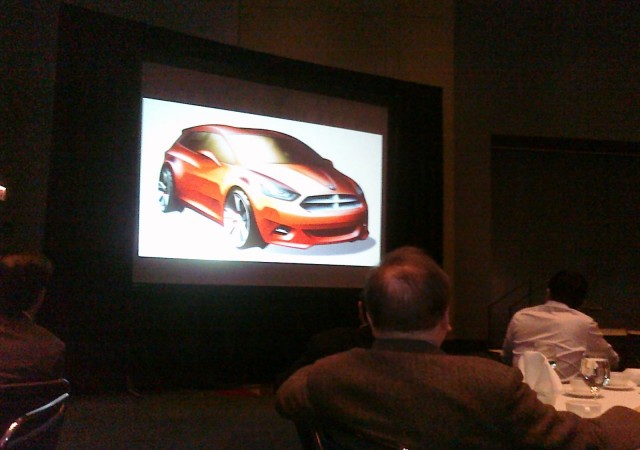 Last week's Chicago Auto Show didn't hold a lot of surprise concepts or glamorous supercars, but there were a few key developments for car shoppers, including a hint at a new Dodge Compact car. The preview, given at the Economic Club of Chicago toward the end of the media days, reveals a new small car that is expected to use a modified Fiat Group platform, and will be one of the first joint projects of the new Fiat-Chrysler partnership.

The image, shown by Dodge president and CEO Ralph Gilles during the presentation, depicts a concept drawing of the new B-segment compact. The styling is similar to the Dodge Caliber hatchback's, though it looks to be one notch smaller, with a more coupe-like profile. The aggressive front-end treatment and characteristic Dodge crossbar grille are other familiar cues.

A separate report from Automotive News confirms Dodge's earlier five-year product plan, with the new compact expected to arrive in 2012 or 2013. The platform that will underpin the Dodge compact is tipped as a widened, lengthened version of a new Fiat platform dubbed Compact Wide. Cars built on these underpinnings are expected to deliver European-style handling and ride quality, meaning a bit more taut and tidy than traditional U.S.-tuned cars, with competitive models such as the Audi A3 and BMW 1-Series as benchmarks.

Lighter weight--and therefore better fuel efficiency and performance--will be made possible through use of high-strength steel and aluminum in the chassis and suspension, and advanced control systems like electric power steering. The engines in the car are also expected to get an efficiency boost thanks to Fiat's MultiAir valve timing system, with a goal of improving fuel efficiency 25 percent by 2014.

We'll keep you up to date on the latest developments of the Chrysler-Fiat partnership, including more on this Dodge Compact car, as they break.