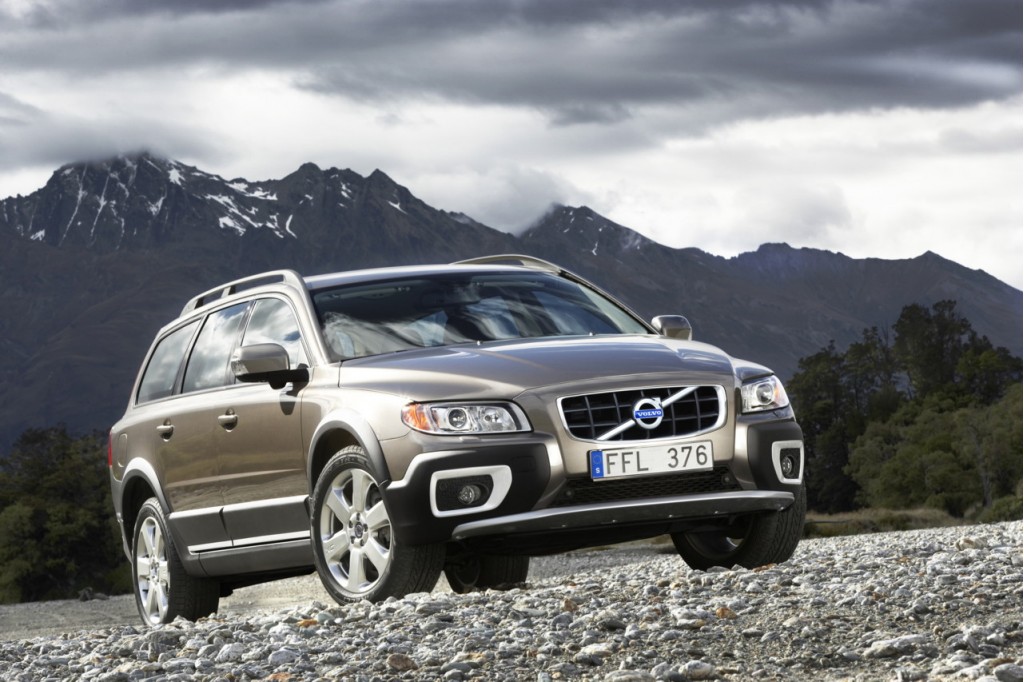 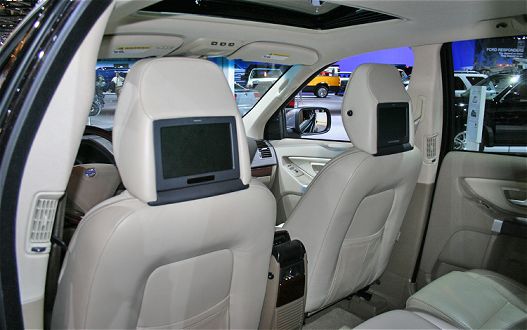 The internet's slow, insidious takeover of Planet Earth inched forward at the 2010 Chicago Auto Show, as Volvo unveiled a new, rear-seat entertainment system. The RSEi-500 debuted on the 2010 Volvo XC70, featuring touchscreens embedded in front-seat headrests, a built-in wi-fi router, and a 500gb hard drive that allows users to download music, videos, and other data.

Volvo developed the RSEi-500 in conjunction with Azentek Corporation and Gracenote. (Sprint seems to have been involved, too, since Volvo touts the system's "Overdrive™ 3G/4G Mobile Hotspot", which tapped into the "turbocharged speeds of Sprint 4G" during the Chicago debut.) Of those partners, Gracenote is the keystone in the system's entertainment options, allowing backseat passengers to sort and play their music collections, and to identify and download tracks playing on the car's satellite radio. However, Gracenote's participation does raise an interesting question: which automaker will be the first to partner with the Big Kahuna, iTunes?

We appreciate the fact that Volvo -- an automaker known for putting safety first -- has opted to make this entertainment system backseat-only. There's been a good bit of discussion lately about in-car internet, particularly its effect on distracted-driving. We do, however, have some issues with the name, which seems...not so catchy. The Sync telematics system has become a popular feature --one that Ford customers often request by name -- but we're not sure the same will hold true for the RSEi-500. Also, Volvo's system runs on Windows XP, which is great for stability purposes, but since it's at least one, if not two generations behind the operating system on many home PCs, we wonder if that might inhibit the transfer of data from car to home and back again.

And of course, some people will have issues with internet-creep. Those are the sort of people who like to remind us that not so long ago, backseat entertainment meant something entirely different. We say that ship has sailed; learn to deal with it.

According to the press release (pasted below) the RSEi-500 system will be available on select Volvo models by June 2010,  as per "Customer feedback at the Chicago Auto Show" -- which seems a bit premature, since the release launched yesterday, when media like TCC were the only folks allowed into the show, but there's something to be said for optimism.

CHICAGO, Feb. 11 /PRNewswire/ -- The 2010 Volvo XC70 will be shown at the Chicago Auto Show on February 11, 2010 with the industry's first Internet connected Rear Seat Entertainment System with Windows XP, WiFi and a 500G hard drive. This innovative product will allow customers to surf the Internet, download applications to personalize their Volvo to their lifestyle while enjoying video and unlimited music download using a digital touch screen.  The RSEi-500™ will also allow customers to connect their vehicle to their home computer thus allowing video, audio and other home data content to be easily transferred to the vehicle's on board computer.

Volvo Cars of North America has partnered with Azentek Corporation and Gracenote® to introduce this revolutionary product to the market. The Chicago Auto Show demonstration will optimize this leading edge new technology by leveraging the turbocharged speeds of Sprint 4G via its new Overdrive™ 3G/4G Mobile Hotspot.*

"The RSEi-500 has set a new standard for the Rear Seat Entertainment industry.  This fully integrated Multimedia RSE allows customers to surf the Internet, enjoy Mobile TV and watch videos, while boasting the industry's first interactive audio library and video exploration experience enabled by Gracenote and its partners, all from the back seat of their Volvo XC70," said Jack Lawson, Product Manager at VCNA. "These technological properties are what we know appeal to the discerning electronics buyers and owners of Volvo vehicles."

Volvo Cars, in teaming with Gracenote and its partners, provides the most comprehensive in-vehicle music and video experience in the industry.  Taking advantage of the broadband connection and Gracenote's comprehensive automotive and server solutions, passengers will for the first time be able to navigate their music collections by mood, and display lyrics in North America, artist biographies and reviews as music is playing. Additionally, Gracenote is powering Volvo's Music Service which allows users to explore and download as much music as they desire as part of the bundled entertainment solution.  The system can also identify and retrieve information for music currently playing on the AM/FM/Satellite radio and then download those tracks directly to the entertainment system.  Users can also display cover art, synopses and cast details for DVD movies, explore additional video content online and have a celebrity artist voice of choice interact with the user during the music experience.

"We are pleased to enable Volvo with the latest Gracenote technologies for music and video recognition, as well as online media exploration, recommendation, and Gracenote-powered music download services for Volvo's next generation of entertainment systems.  This implementation sets an entirely new standard for an in-vehicle entertainment system and what is possible with Internet connectivity in the car," said Bill Fleck, Head of Automotive Sales, Americas at Gracenote.

Based on Customer feedback at the Chicago Auto Show, the RSEi-500 is scheduled for launch in June, 2010 on various Volvo models.