More Volkswagen Hybrids On The Way, Jetta May Be Next 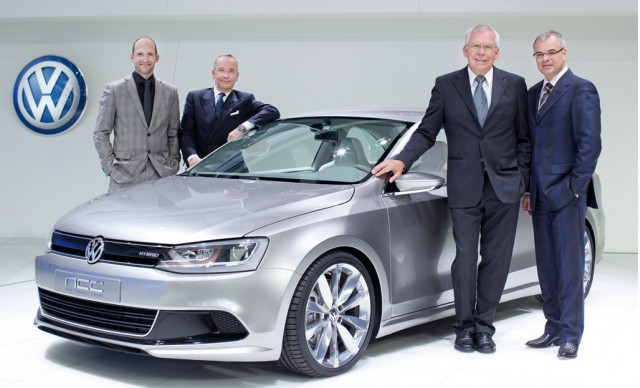 Volkswagen has just taken the wraps off its new 2011 Touareg SUV, which in hybrid form delivers a V-8 like 375 horsepower and 428 pound-feet of torque from its V-6/electric motor combination and a relatively frugal fuel economy (European combined) of 29 mpg. However, this is just the tip of the iceberg for Volkswagen's new hybrid onslaught, which is expected to eventually span the automaker's full line of models, including minicars, hatchbacks and sedans, and even diesels.

The information comes from the automaker's hybrid development chief, Eike Feldhusen, who revealed to What Car? that there will likely be a long line of successors to the Touareg Hybrid. "We have ideas for hybrids from the smallest car to the biggest, but this Touareg is the best way to showcase the possibilities," he explained.

Feldhusen went on to reveal that Volkswagen's hybrid system, which sandwiches an electric motor in between the engine and automatic transmission, is a modular system designed for use in a wide range of models. Some unique elements of Volkswagen's design is the "coasting" feature, which works by disengaging the engine from the transmission as soon as the driver releases the accelerator pedal and allows the vehicle to roll significantly longer since drag torque losses are eliminated. There's also a regenerative braking system to help top up the batteries and an engine-stop start system. A similar set-up is being used by Porsche for its upcoming Cayenne S Hybrid as well as Audi for its next-generation Q7.

Feldhusen wasn't willing to reveal which model would be next in line to receive the hybrid treatment but the most likely option would be something new like the forthcoming Jetta Coupe, previewed by the 2010 Volkswagen New Compact Coupe Concept presented at last month's Detroit Auto Show.