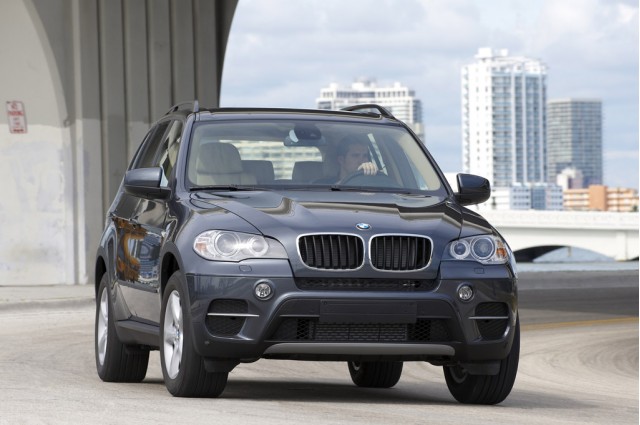 BMW has enhanced its X5 SUV for the 2011 model year, updating the vehicle’s powertrain and styling to keep it fresh in what has become one of the most closely fought segments in the industry. Originally launched back in 1999, the BMW X5 helped change the SUV segment by showing that the driving dynamics, responsiveness, and handling of a car could be compatible with the utility, versatility, and off-road capability of an SUV.

The 2011 BMW X5 will make its debut this April at the 2010 New York Auto Show and looks set to continue the legacy of previous models by offering more refinement, higher performance and improved fuel economy.

Setting apart the 2011 model from the outgoing version are restyled bumpers, front and rear, as well as revised head- and tail-lamps, and a new selection of exterior colors.

BMW is spicing things up by adding two new gasoline variants, the X5 xDrive50i and X5 xDrive35i, in addition to the previous X5 xDrive35d turbodiesel.

The X5 xDrive50i picks up BMW’s potent twin-turbocharged 4.4-liter V-8, which in its latest application delivers 400 horsepower and 450 pound-feet of torque and is capable of carrying the big SUV from 0-60 mph in just 5.3 seconds. Pricing will start at $59,275 including destination and handling fees.

There’s also an X5 xDrive35i that makes do with a 300 horsepower single turbo 3.0-liter straight six and is capable of reaching 60 mph from rest in a reasonable 6.4 seconds. This particular model comes in three different flavors: Base, Premium and Sports Activity.

The X5 xDrive35i Premium has a starting price of 52,475 including destination and handling and several extras as well as the availability of third row seating. Finally, the X5 xDrive35i Sport Activity comes in at $54,975 including destination and handling and includes even more standard equipment than the Premium model and includes the availability of an M Sport Package.

The X5 xDrive35d turbodiesel is still offered for the 2011 model year, and despite increased competition remains the fastest and most fuel efficient diesel-powered vehicle in its class. The vehicle’s 265 horsepower and 425 pound-feet of torque see it reach 60 mph from rest in 6.9 seconds while returning an EPA-estimated fuel economy of 19 mpg city and 26 mpg highway. Pricing for this model remains at $52,175 including destination and handling.