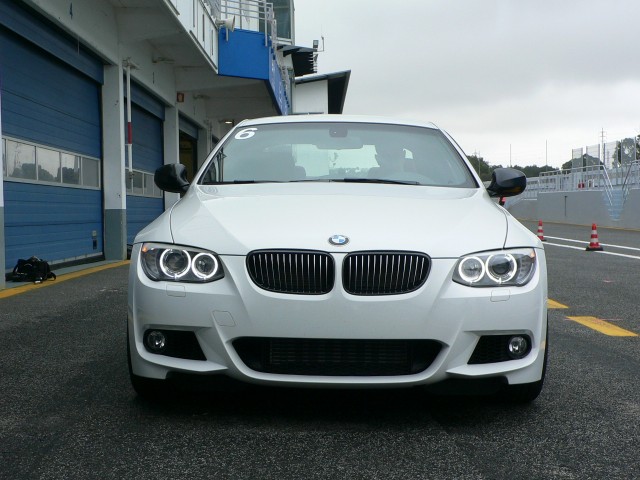 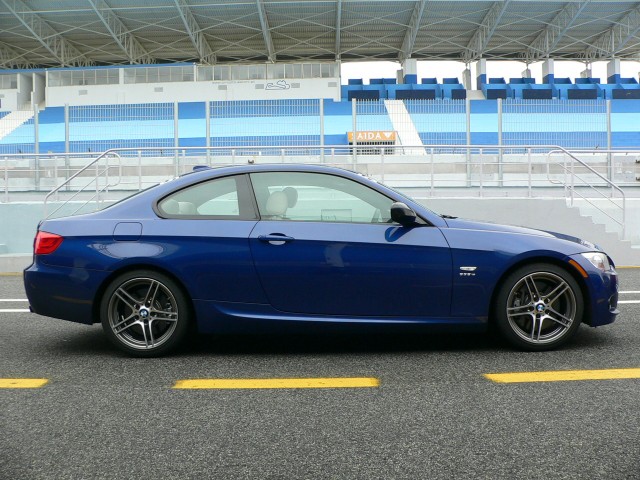 BMW is directly taking on the Euro-tuner crowd and giving a nod to weekend racers with a new track-ready 2011 BMW 335is model set to arrive to dealerships later this spring.

The automaker admits that a number of tuners have grown fond of the twin-turbocharged 3.0-liter in-line six-cylinder engine in the BMW 335i, so the automaker is moving in on their market with a model that pairs higher boost and more horsepower and torque with a long list of enhancements from the company’s M Sport drawer, plus some exclusives we haven’t seen before.

And perhaps most importantly for some more closely watching their budget, the 335is has a host of ‘official’ tuner improvements that won’t void the factory warranty.

TheCarConnection.com was allowed a special preview drive of the 2011 BMW 335is at Portugal’s famous Estoril track, though we weren’t permitted to take these pre-production, North American-spec vehicles on the surrounding roads and can’t comment exactly on how the powertrain, suspension, and equipment changes stack up for road duty.

Straight off, BMW is bringing something to the 335i that the tuners won’t deliver: It’s the first 3-Series model for the U.S. to offer the excellent, quick-shifting seven-speed Double Clutch Transmission (DCT) with Launch control. A six-speed manual is standard, with the DCT optional.

While the rest of the 2011 335i Coupes and Convertibles both get BMW’s new N55 twin-scroll, single-turbo version of the 3.0-liter six, making the same 300 horsepower and 300 pound-feet of torque, the new 335is gets a boosted version of the existing twin-turbo N54 engine, making 320 hp and 332 pound-feet. It gets even better; the engine management allows an overboost window of up to seven seconds at full throttle for quick bursts during passing or, for instance, in racetrack straightaways; during that time, the engine churns to 370 pound-feet. BMW says that the 335is will be able to accelerate to 60 mph in 5.0 seconds with the DCT.

Perhaps the first thing you’ll notice about the new 335is is the engine note; thanks to a sports exhaust system it’s much more vocal at low revs than that of the standard 335i models and manages to ‘sing’ more at the higher revs in the way that BMW’s normally aspirated sixes otherwise do. 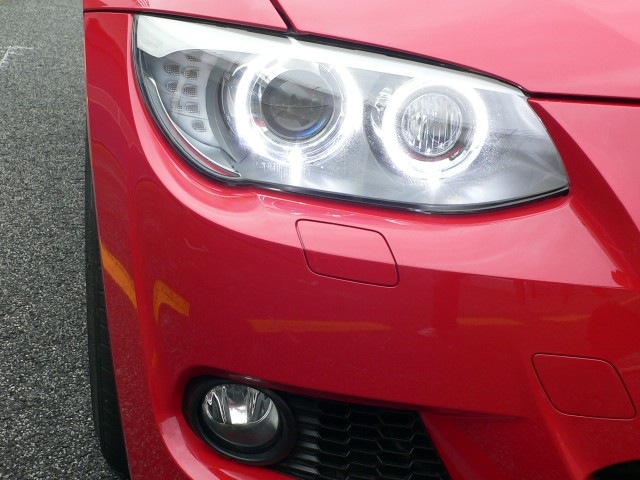 The 335is builds on all the enhancements and changes that are part of the facelift all 3-Series Coupes and Convertibles get for 2011. A new hood and front fascia reposition the brand’s kidney grille a little lower and narrower, and it’s blacked-out in the 335is. LED ‘corona-ringed’ headlamps, new LED tail lamps (including LED turn signals and brake lights), new exterior mirrors, and reshaped side sills and side skirts round out the look from the outside. Inside, the 3-Series models get some of the interior touch-ups that were introduced for 2010, including additional matte-finish chrome trim, and controls for the heated seats have been brought up within the climate controls.

The 2011 BMW 335is (and the other 3-Series Coupe and Convertible models) gets iDrive when equipped with the available navigation system. It’s the new fourth-generation version of iDrive with a revised menu structure that we like much better; a ‘back’ button and hot buttons for major functions allows easier operation, and the system includes a higher-resolution wide-screen display.

Ready for track time, and it looks the part

But back to what matters: A number of other improvements make the 335is ready for track time. A high-output cooling fan and auxiliary oil and water cooling help provide protection in hard use; the model gets stiffer engine mounts as well, and an M Sport suspension is part of the package. Other items that distinguish it from the standard 335i include an M Sport front fascia (which on coupes omits the fog lamps for additional airflow and cooling) plus a functional rear air diffuser, gloss-black mirror caps, 18-inch ferric gray wheels, and black chrome exhaust tips. Those standard 18-inch wheels in the 335is have a design that’s exclusive to the model, while the optional 19-inch wheels are otherwise dealer-installed M Sport accessories.

Inside, the 335is gets M Sport upgrades for the steering wheel, door sills, and shift knob (with short-shifter kit), plus sport seats, an anthracite headliner, and stainless-steel sport pedals. The instrument panel gets special 335is badging and aluminum Glacier Silver trim, plus gray-faces gauges with white needles. 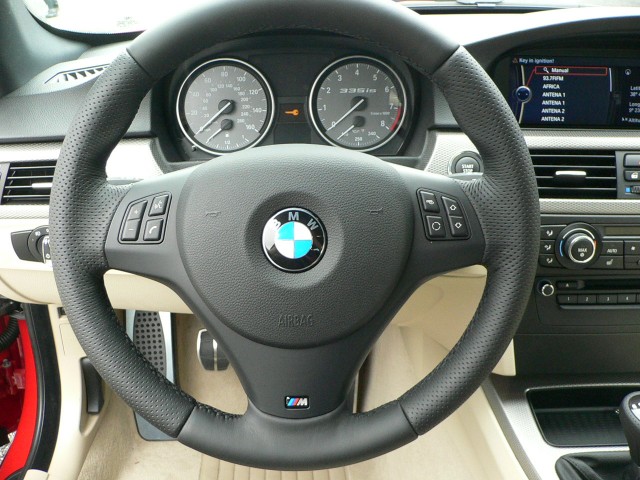 All the 3-Series goodness, with a little more kick

As with the new 2011 5-Series that we recently reported on in a First Drive, the 335is gets pull-type steering-wheel paddle shifters (left for downshifts, right for upshifts), which command an almost instantaneous shift from the DCT gearbox. Unfortunately, DCT still forces a downshift at full throttle, even in manual mode, where track drivers would likely want the ability to hold a selected gear.

But the rest of the story is exhilarating. The stronger engine in the 335is, just as the one in the 335i, responds to the throttle like a well-tuned V-8, and it provides peak torque from 1500 rpm all the way up to 5000 rpm—meaning that you’re not at all likely to be caught off guard, in the wrong gear. The 335is has the same set of braking components as the standard 335i Coupe and Convertible, but that’s not a bad thing; they did just fine in several hours of sustained track driving—much of it taxing the brakes with liberal use of the stability control system on a slightly damp surface—and they felt fade-free the whole time. The 335i isn’t significantly different in weight, so we would expect it to drive much like the rest of the 3-Series models, as equipped with the M Sport suspension, on the road—rather firm, but just compliant enough, without much road noise. Steering, as with other 3-Series models, is excellent whether on the road or on the track.

All initial 335is models will come with a sunroof, but BMW is considering a sunroof delete option, and it will be built in six different interior colors

The official U.S. debut of the 2011 BMW 335is will be at the New York International Auto Show later this spring. Starting prices for the BMW 335is are $50,525 for the Coupe and $59,075 for the Convertible—exactly $7,000 more than the respective 2010 335i models—with Convertibles slated to arrive at dealerships in April and Coupes in June. A full range of options will be offered, including a Cold Weather Package and Premium Package.