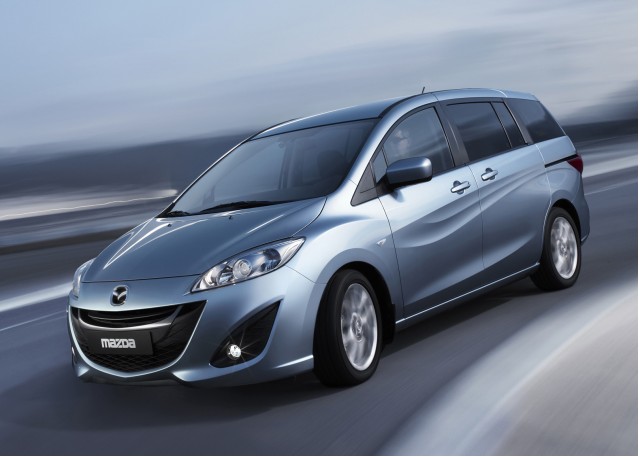 The 2011 Mazda5 was unveiled today ahead of its upcoming debut at the Geneva Motor Show in March. The pint-sized family hauler gets a dramatic new design and updated powertrain to deliver more style and efficiency in a compact and useful package.

The most immediately noticable feature of the 2011 Mazda5 is its dramatic and flowing styling, with character lines down the side and an up-swept front-end treatment like that seen on the 2011 Mazda3. Mazda calls it "Nagare", from the Japanese word meaning "flow". The 2011 Mazda5 is the first Mazda model to fully adopt this design theme.

Official details for the U.S. version of the vehicle are still forthcoming, but based on the revealed European specification for the 2011 Mazda5, we know that the MPV/small minivan gets an updated 2.0-liter direct-injection engine paired with a six-speed manual transmission, though a six-speed automatic option is likely for the U.S. In Europe, the new Mazda5 also gets Mazda's "i-Stop" stop-start system to further cut unnecessary fuel use and reduce emissions by up to 15 percent.

It's not yet clear if the U.S. will get the i-Stop system, because the EPA's current fuel-efficiency testing methodology makes it of little benefit in the final figures, despite real-world benefits. A 1.8-liter engine is also available in Europe. The current U.S.-market 2010 Mazda5 uses a 2.3-liter engine and yields up to 28 mpg on the highway in manual-transmission trim, so the 2011 Mazda5 could possibly reach above 30 mpg highway. The powertrain updates should help fix the one major criticism of the Mazda5 found by TheCarConnection's editors in our last test drive of the model. 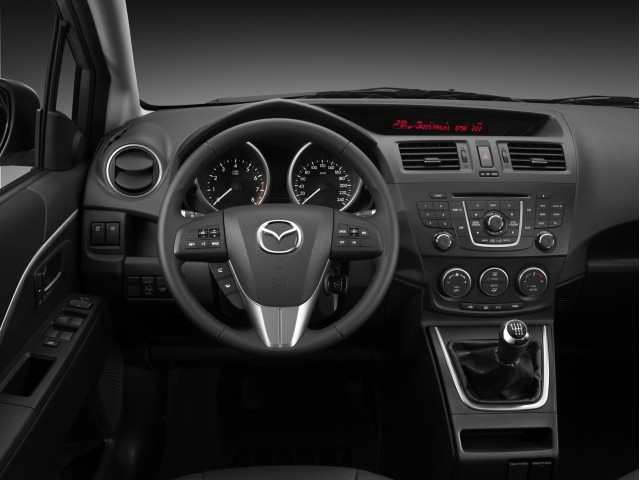 Standard features for the 2011 Mazda5 include dual sliding doors and reconfigurable seating arrangements. The "karakuri" second-row center seat can be converted to provide storage space, and when used in seating mode, the Mazda5 is a very compact six-seater. The 2010 model has also secured a five-star crash-test rating from the NHTSA, and similar performance should be expected from the 2011 model.

Though much smaller than conventional minivans like the Honda Odyssey and Toyota Sienna, the Mazda5 delivers an aerodynamic and highly-efficient package. Whether the new styling will be enough to boost its sales numbers from the previous model's remains to be seen, but as an efficient and fun family hauler, it's in a segment of its own.

Full details and U.S.-market specifications should come closer to the car's launch at the Geneva Motor Show, which kicks off March 2 in Switzerland. For a look at the greener aspects of the 2011 Mazda5, check out John Voelcker's preview at GreenCarReports.