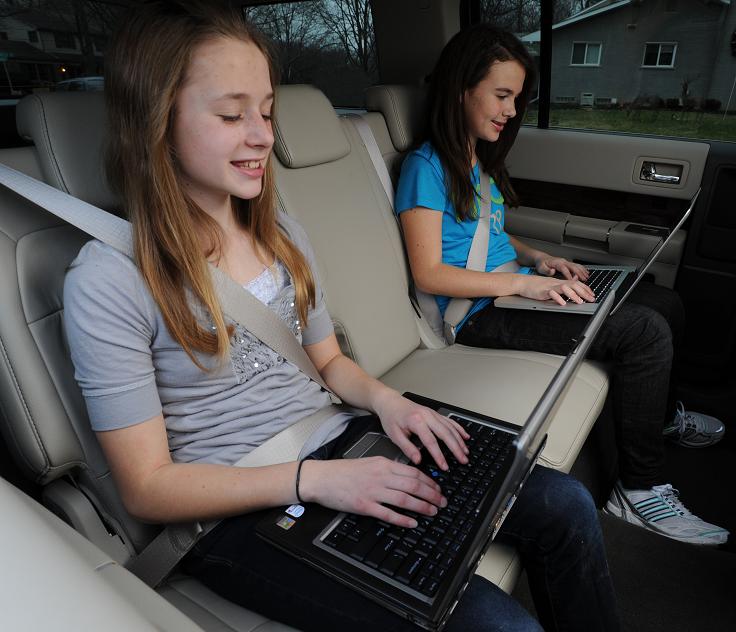 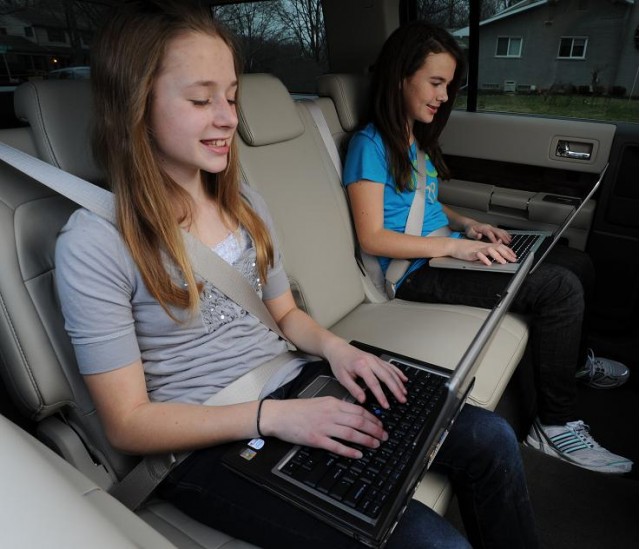 Here at TCC, we spend a lot of time reading and writing about roadway safety. In recent years, we've provided extensive coverage of distracted driving issues -- especially texting behind the wheel and more recently, in-car internet. Both are serious concerns (phone-related distractions caused 6,000 deaths and 500,000 injuries on U.S. roadways in 2008 alone), but it's become clear that banning the technology isn't the best solution to the problem. Instead, individuals and automakers have to adapt to this new, internet-everywhere environment through (a) driver education and (b) tech developments to minimize distractions. We're happy to report that progress is being made on at least one of those fronts.

Ford's Sync system isn't perfect, but it does represent some of the smartest in-car technology we've seen to date. Not only does Sync offer a range of functions to drivers, but later versions also have built-in safety features that disable some of those functions (like playing videos) when the car is in gear. Those safeguards didn't stem from the request of some regulatory agency; they came from within the Sync team itself. That confirms what we'd already suspected: that companies can occasionally opt to curtail their offerings in the interest of consumer safety.

Sync and other telematics systems also offer voice interaction, which limits the amount of time that drivers have to take their eyes off the road when answering calls and changing the music on their MP3 players. Take a look at this chart (from Ford, via Mashable) that demonstrates how much more time voice-enabled systems allow drivers to focus on driving. 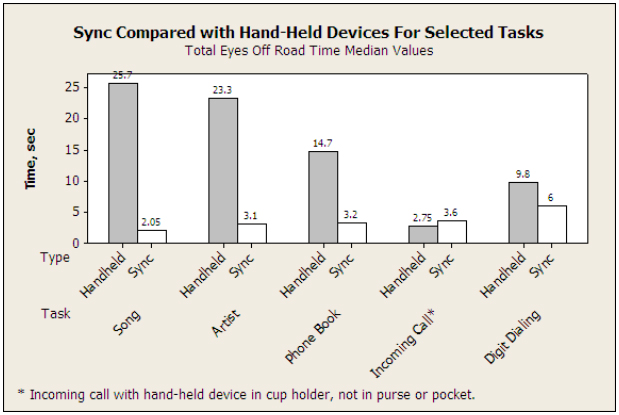 As software evolves and telematics systems become commonplace in automobiles of all types, we hope to see these statistics improve. Apart from Ford, many other automakers like Jaguar and Volvo offer in-dash systems that integrate with cell phones and MP3 players -- and that's to say nothing of the countless aftermarket devices lining the shelves. Even better (for Ford's competitors anyway): Ford's exclusive development contract with Microsoft ended at the close of 2008, and competing Sync systems will soon be available in Kia, Hyundai, and other models.

However, as much as we like features like self-limiting telematics systems and voice control, there are a couple of safety-related caveats:

1. Voice interaction is still dangerous. Studies have shown that talking on the phone while driving isn't any safer when the driver uses a hands-free system. The problem with taking a call at the wheel isn't the physical act of holding the phone to your ear; its the fact that your focus shifts to the person on the other end of the line -- even when your eyes are glued to the road. Voice control may look safer, but looks can be deceiving.

2. Some applications just don't belong behind the wheel. Take a look at this terrible/terrifying video of Ford's attempt to wrap Twitter functionality into Sync. For starters, the integration between phone and Twitter app and Sync and Bluetooth seems really iffy. (We've had more than a few problems just pairing our handhelds, so this demo seems like crazy talk.) Furthermore, the Sync window is lousy for Twitter management, and the voice readout of tweets is flat-out creepy. Ford should probably ditch this approach altogether and develop an app comparable to the one for Pandora. But more to the point, if drivers are so addicted to Twitter that they have to tweet behind the wheel, they probably shouldn't be behind the wheel in the first place. Is there a Twitter-addiction camp like that sex-addiction place Tiger Woods went to in Mississippi? If not, we smell a big business opportunity.

Drivers have always had to deal with one sort of distraction or another. Not so long ago, we were concerned with eating and/or drinking and driving (which are both stills problems, obviously). Today, it's cell phones, iPods, and satnavs. We cringe at the thought of what's next.

Although telematics technology is far from perfect, it's encouraging to see that manufacturers are building in safety controls on their own, rather than being mandated to do so by government agencies. We expect such oversight will eventually be legislated -- likely after a particularly grave incident -- but for now, developers seem to be on the right track. How quickly drivers will adapt to this new, internet-immersed driving environment, however, remains to be seen.