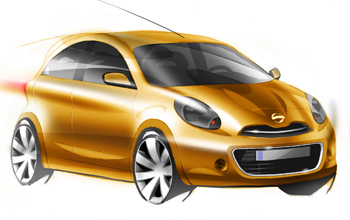 The Nissan Versa is one of the least expensive cars on the U.S. market with a base price of $9,990, though sacrifices must be made to get there. But now a report has emerged that Nissan is planning two more small cars, smaller than the Versa, to be priced comfortably around $10,000. The latest report confirms information dug up by Bengt Halvorson back in October.

That means you won't necessarily have to give up your power windows, stereo and air conditioning to get down to $10,000. The two models are still unnamed, but with Nissan already planning an eight-model rollout for the coming year, it's not hard to see two more coming along for the ride.

What is a bit harder to see is how a sub-$10,000 sub-Versa-size car will fare in the U.S. market. Its tiny size and low price may give the perception of a "disposable" car--not necessarily good for Nissan's brand image. On the other hand, there may be a market for people that would like a hyper-efficient and low-cost third car with modern safety and conveniences built-in. Nissan is obviously banking on the latter.

The decision to sell the $10,000 cars in the U.S. is a natural one, according to Nissan's chairman for the Americas, Carlos Tavares. He told Automotive News, "I think $10,000 is a good point. As you know, there are very few new cars sold at that price point in the United States."

The new small cars will be built on what Nissan calls the V platform, and though three cars will be built around the same architecture, only two will be sold in the U.S. The third will be sold in Central and South America alongside the other two. The V platform is the architecture Nissan will be using to replace the Micra's underpinnings in other markets, potentially opening the door for the next-gen Micra to come to the U.S. as one of the two new cars.

No time frame has been given for the pair of $10,000 cars, but the next Micra is expected to come to some markets in late 2010 as a 2011 model, meaning the U.S.-bound models will like arrive sometime after that.