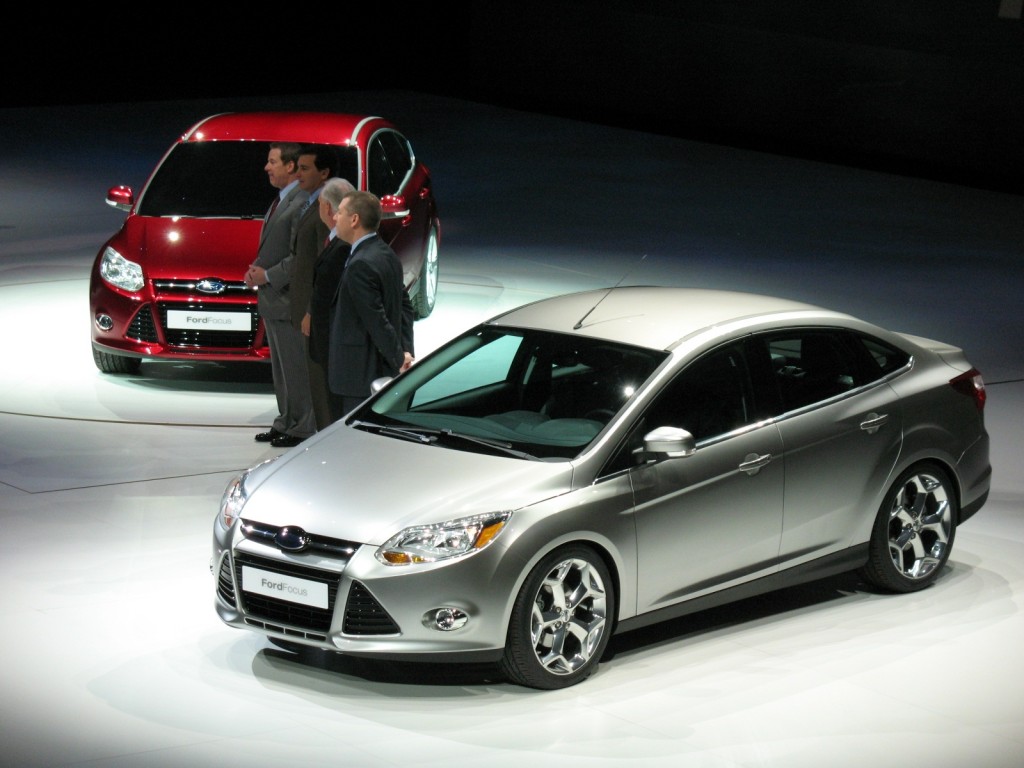 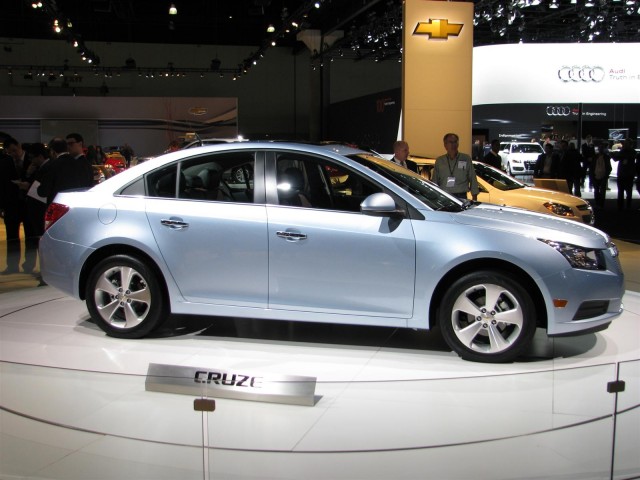 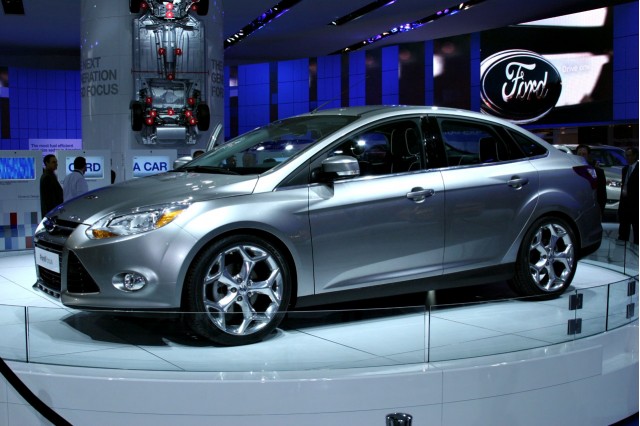 With the new 2011 Chevrolet Cruze and 2012 Ford Focus, as shown out on the Detroit auto show floor, you're looking at the future heart of the market. According to many who keep tabs on the industry, the so-called C-segment--the size of these two small sedans--is slated to grow rapidly over the next several years.

The 2011 Chevrolet Cruze made its production debut at this past year’s Los Angeles auto show, and General Motors was showing several examples of its Chevrolet Cruze compact sedan here at the show. But the cross-town rivalry could be felt as Ford chose the Detroit auto show for the global debut of its all-new 2012 Ford Focus.

Comparing their respective exterior designs, the new Focus and Cruze are around the same size overall and, when you hold their profiles side by side, are remarkably similar in terms of overall profile.

That's about where the comparisons end. While the Cruze is clean and conservative--undoubtedly too much so for some tastes--the Focus has lots of details to be discovered, from the lipped wheel wells and flared fenders to the aggressive front end design, flowing sheetmetal leading to the taillamps, and more overt wheel designs. Topping it all off are the dual sharp 'Z' creases in the sheetmetal, which, to this reviewer's eyes effectively lower the beltline and give the proportions more of a sport-sedan pop.

In an informal poll of fellow auto journalists out on the Detroit auto show floor, nearly everyone preferred the Focus' exterior to that of the Cruze, although several noted that the Focus design was on the verge of being busy.

Take a look inside, and neither design neglects the details. Though both models are relatively affordable, their cabins have design attributes and materials that would have only been seen in luxury-brand vehicles just a few years back. For now, they serve to make the current 2010 Ford Focus and 2010 Chevrolet Cobalt look downright aged.

Over the next several slides, we take a first look at some of the interior details of these new compacts from Chevy and Ford. Take a closer look with us, and let us know which one you think is the winner. 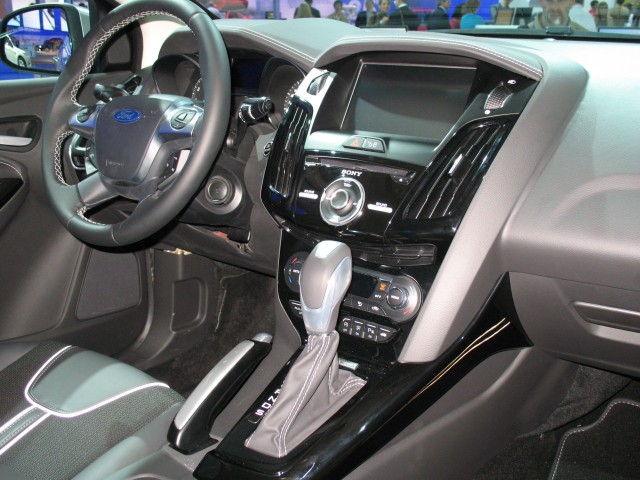 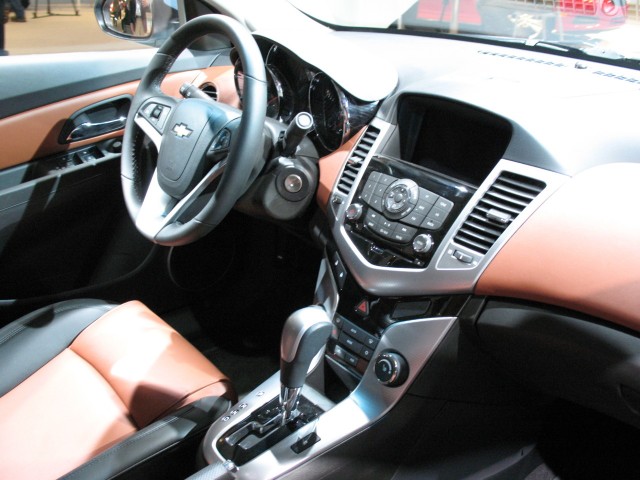 The up-front details of these two sedans' interiors vary quite a bit. The Focus takes an all-new approach, inspired more by the direction of its international products like the 2011 Ford Fiesta than by its current U.S. lineup. And the high-end Sony sound system and MyFord system in this high-end model serve to make it look overt and tech-savvy.

In comparison, the interior themes in the 2011 Cruze don't look any less exciting (we like the two-tone look in this car), but the overall design of the dash is simpler and smoother. In the top-of-the-range like the vehicle we snapped, a slight bit Cadillac-inspired. 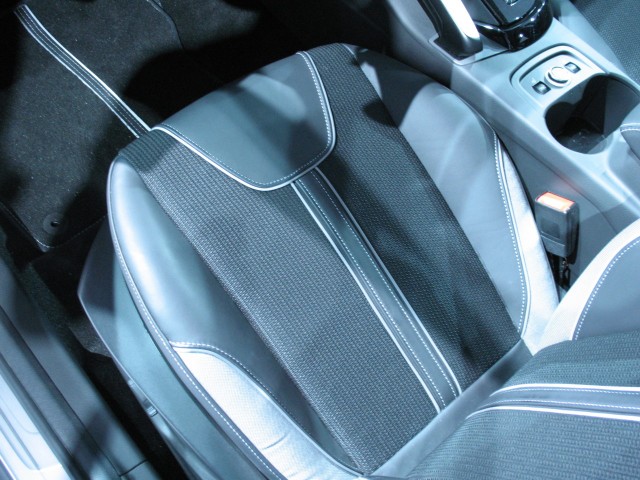 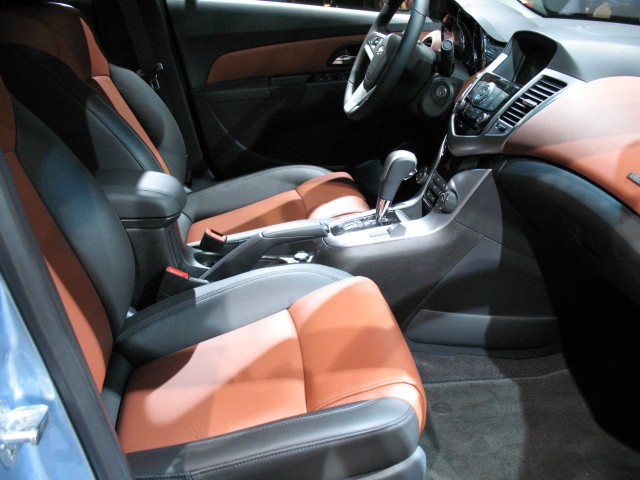 The 2011 Chevrolet Cruze has seats that look well bolstered, and the two-tone look also works very well here, especially with leather. The 2012 Ford Focus that we took photos of had the upgraded sport cloth interior, with a durable, stylish appearance and soft feel. We loved the inserts, pattern, and stitching of the Ford seats in this North American-trim vehicle.

On the other hand, take a look at the back seats and it appears that the Chevrolet Cruze has a bit more space. We'll wait to give you the final verdict when we can get some real time in these vehicles, but for now it seems like a tie here. 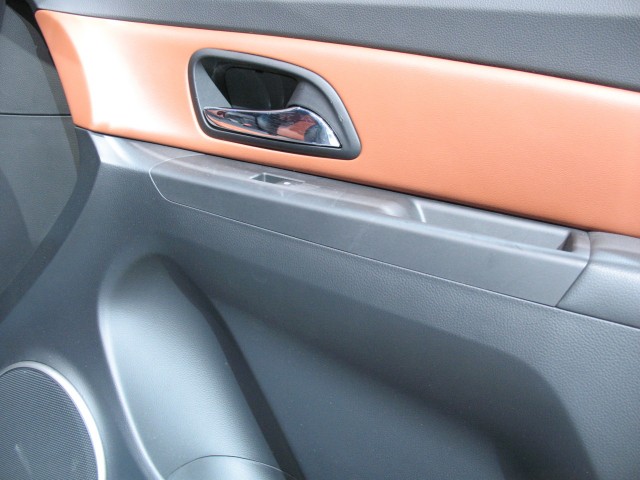 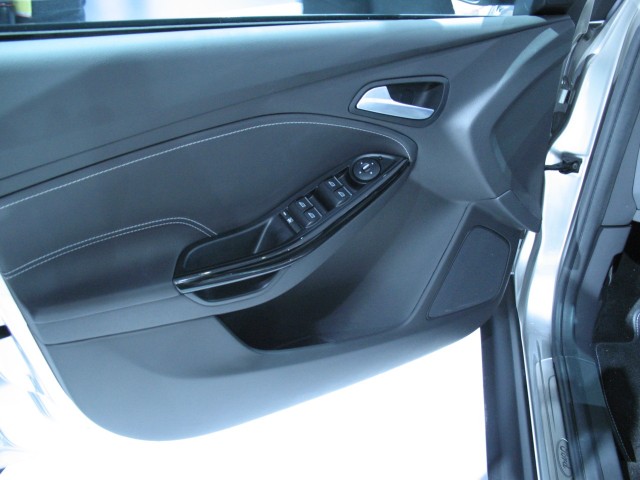 Completely different in this respect. While the 2011 Chevrolet Cruze gets high-up handles and deep, recessed door bins, it definitely has more hard-plastic trim, reveals itself as an inexpensive small car. On the other hand, the 2012 Ford Focus door panel looks styled and sculpted, with a lower handle and a higher-quality look to the materials. We'll get back to you on how it all feels. 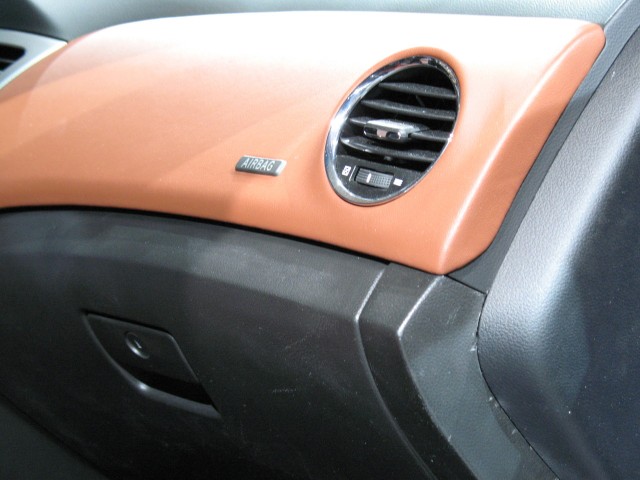 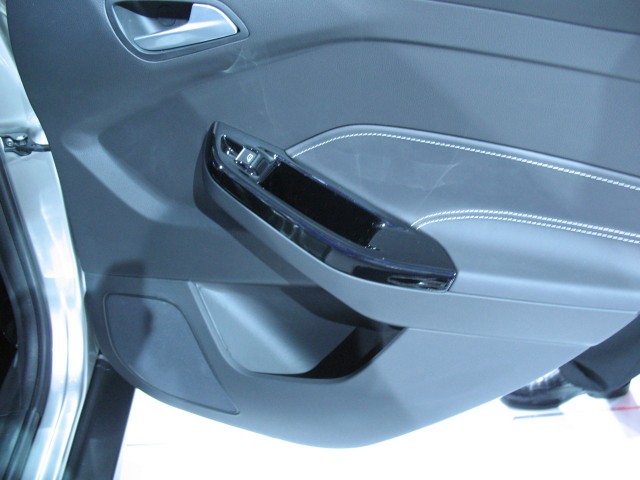 Regarding the 2011 Ford Focus, the roofline and shape of the rear doors made us suspect that it might be more difficult for an adult to get into the back seat. The Cruze looks roomier in back.

Although we can't say that in either case these are production-caliber materials, the patterned metallic trim in the Cruze gave the center console a lower-grade look, in our opinion, than what's used in the Focus. 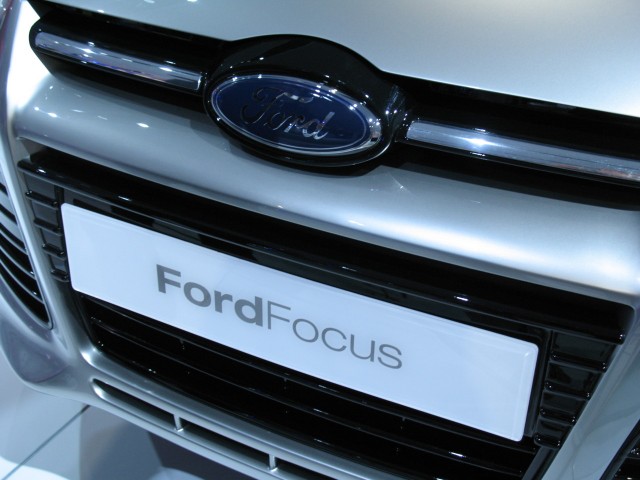 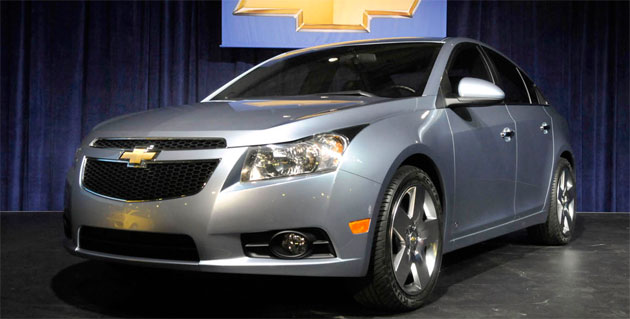 And that's about all we can show you at this point. Keep in mind that these comments are based on raw notes and first impressions of the show cars, and that production versions might reflect slightly different trim or material choices.

Ultimately, of course, your choice will probably depend more on the driving experience, refinement, safety, and features than it will on those initial impressions of the interior.

But we can say it's played a role on our first impression. The more we looked in several versions of the 2012 Ford Focus and 2011 Chevrolet Cruze on the stand, the Focus simply felt a little more inspirational and sporty. We like that.