GM Reins In Dealerships By Offering To Pay For Facelifts 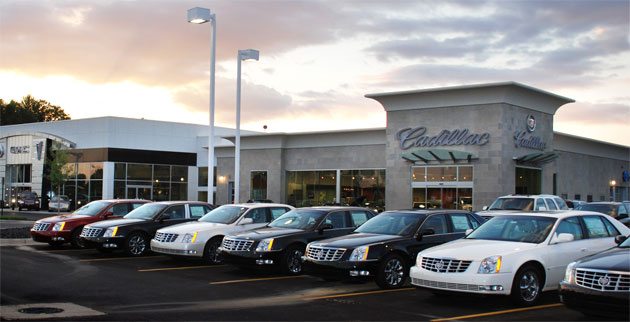 GM is nudging its dealerships along by offering them some direct money—paid out over five to ten years—to remodel and freshen-up, and meet some tighter standards.

Anyone who's shopped around—in a major metro area, especially—knows that while dealerships are the 'face' of the automaker, they can vary in presentation like night and day.

The sad fact is, few companies have much control over the actual dealership facilities. This editor has seen plenty of cramped showrooms appointed with grimy, hard-plastic waiting chairs, unpalatable coffee, and cubicles that look like they were collected from the dumpster of a furniture warehouse, along with harsh workshop-style lighting in service waiting areas that reek of cigarette smoke, popcorn, and motor oil. At the very least, shouldn't a dealership provide wi-fi to help respect the lost time of customers and help them be productive while they're waiting?

While every automaker suit would chime in with a resounding 'yes,' you have to keep in mind that they're individual dealership franchises, owned and operated by individuals, groups, and companies, most of them not associated with the automaker itself. At the end of the day, the objective is to move metal, and there are some very different ideas on what moves metal. Provided they keep selling cars and do the minimum required, they'll likely keep their franchise agreement.

According to Automotive News, the new initiative, which is part of a so-called Essential Brand Elements program, also requires that dealerships adopts the brand's Web site look, agree to staff training, and give GM access to their customer lists.

Some dealers who currently combine a GM brand with another automaker's brand would also be required to move the GM brand to a separate building—which could get very pricey, especially when it's not so clear how the market will look a decade from now.

Amounts awarded to dealerships depend on annual vehicle sales, taking into account price, but GM told AN that the program money could "conceivably" cover the costs of the changes.

The automaker is already in the process of cutting the number of franchises due to low sales.

GM is actually doing very well with sales satisfaction. For 2009, Buick, Pontiac, and Chevrolet all ranked in the top five spots among mass-market brands in J.D. Power and Associates' annual Sales Satisfaction Index (SSI), which looks at the new-vehicle purchase process, from initial shopping through delivery and after-sales price satisfaction. Showrooms and dealership facilities themselves are also part of the score.