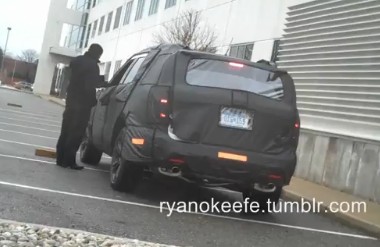 It takes a lot of determination to capture new-car mules in the wild. It takes even more to do so in the chilly wintertime. But the cojones that Ryan O'Keefe demonstrates as he videotapes this 2011 Ford Explorer tester...well,  we can only imagine that the guy's riding in a BIG bucket seat.

Ford fans can take a gander at the clip below. With all that cover-up, we can't say much about the SUV's design -- although it seems boxier than previous editions, closer to some Jeep models like the Patriot than the Explorer profile we've come to know. (Ryan helpfully includes a rendering at the end of the clip, to give an idea of the Explorer's refreshed exterior.)

We're guessing that Ford still has some tinkering to before the 2011 Explorer makes its world debut. Detroit is probably too soon to expect a showing, but we wouldn't be surprised to see the Explorer drop trou in New York this spring. Stay tuned.