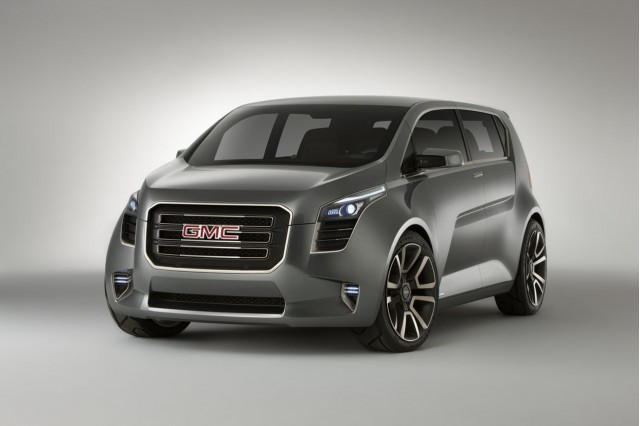 The 2010 Detroit Auto Show opens in Detroit today with a new crossover concept from GM, the GMC Granite.

The Granite may be on display as a concept car, but it's closely related to a new vehicle already headed to Chevrolet dealers, the 2011 Orlando. It's a safe bet that GMC will get a version of the Granite to sell in the 2012 model year, but GM hasn't confirmed its plans for the small wagon just yet.

Still, it's easy to see how the Granite concept could translate into what would be the smallest GMC ever offered. For one, there's the powertrain, a turbocharged 1.4-liter four-cylinder that will power the Orlando as well as the 2011 Chevrolet Cruze sedan and in non-turbo form, will be the range-extender engine found in the 2011 Chevrolet Volt. In this case, it's coupled to a six-speed automatic.

Sized like the Kia Soul and Scion xB, the concept Granite sports rear-hinged rear doors that give it some of the flexibility of the Honda Element--only in the case of the Granite, the right-side seats fold for more cargo space, instead of both rear seats. GM also promises clever cargo solutions for the interior, which wears sueded cloth and buff-colored trim inside as a frame for a tech-happy dash with a large LED screen that controls the entertainment and climate-control systems.

The Granite also sports some styling cues that will look familiar to its own returning shoppers--as well as some call-outs to the Asian competition, particularly at the rear. Up front, though, it's all GMC, with blocky headlamps and a squared-off grille bearing the brand's big red-letter name.

High Gear Media is reporting live from the 2010 Detroit auto show this week. For in-depth Detroit show coverage, turn to MotorAuthority for all the latest from Detroit--and for a more in-depth look at the new Granite concept. And stay tuned tomorrow, when GM unveils another concept, this time for its top-drawer brand, Cadillac.