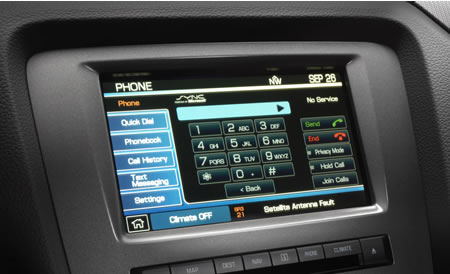 Ford has announced that the next-generation version of its SYNC connectivity system will include in-car WiFi.

The new system will be powered through a USB mobile broadband unit, much like the one that many business travelers already have for mobile connectivity. Yet the system requires no additional software or hardware; the SYNC system itself will function as a secure router, turning the vehicle into a hot spot for occupants as well as people near the car.

Unauthorized access will be prevented through WPA2 protocols, allowing only user-permitted devices, though the system should be compatible with any range of WiFi-compatible laptops, gaming systems, and mobile devices.

Ford thinks there's a big market; in a release it cites a study from the Consumer Electronics Association that describes up to 77 million Americans as "technology enthusiast drivers," of which more than half want a vehicle-based connection. The data also suggests that more than a third of the general population wants some level of connectivity, such as e-mail capability, in their vehicles.

The Ford system will be a less complicated alternative to existing WiFi systems (Autonet Mobile is one of the leading providers) that depend on exclusive hardware and the extra costs of dealer installation--plus additional monthly fees.

Ford says that the new capability will be standard on "select SYNC-equipped vehicles." We'll update you as soon as we know which models will get the WiFi rollout first, and whether or not there are any compatibility issues.

2022 Volkswagen Tiguan freshens up with new styling, technology, and touch controls
Commenting is closed for this article
Contribute
Send us a tip Comment Contact the editor
Follow Us