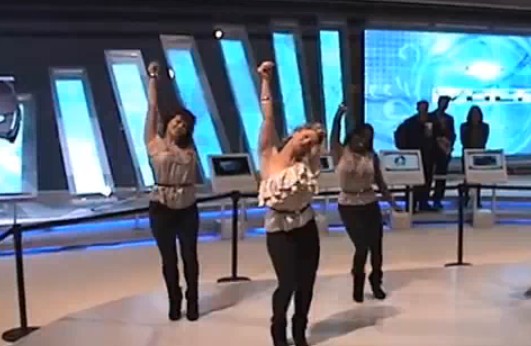 Yesterday, the Chevrolet Volt Dance hit the interwebs in a big way -- and rightly so. Because it is terrible. BIBLICALLY terrible. Like, no-wonder-Bob Lutz-got-moved-around terrible. We thought briefly about praising it as the best indie film in recent months and Avatar's stiffest competition for the Most Overblown Drama award, but our cheeks can't accommodate that much tongue.

Now sure, we understand that car shows are a different world. And hell yes, we've seen LOADS of awful presentations, including some ridiculous dance numbers. Please note: this is not our first time at the rodeo.

However, the Chevy Volt Dance is in a category by itself. The twee folksy music is miles off the mark, the dance looks like it was choreographed by David Lynch and Toni Basil, and the crowd is literally running from the area (check the 1:20 mark). The best part of the clip is the PR hacks in the background, who look like they're giggling and/or pondering a sudden move to Canada. We can't read lips, but we think the one drinking coffee is saying, "Dude, they're doing it! They're totally doing it! You so owe me five bucks."

In closing, we would like to take this opportunity to say to General Motors and America in general: the So You Think You Can Dance thing HAS GONE TOO FAR. For the sake of love and peace and quantum mechanics: JUST. STAND. STILL.

P.S. You can expect Elf-Yourself and other parodies of this for months to come. Consider yourself warned.

UPDATE: At the risk of running this meme into the ground (we know: TOO LATE), John Voelcker has done a bit of investigative research into the history of the Volt debacle: "The Volt Song: What Happened, And What It Could Have Been". Long story short: the music could've been better, but those low-rent Solid Gold dancers were a foregone conclusion.

[GM-Volt via GreenCarReports via Autoblog]