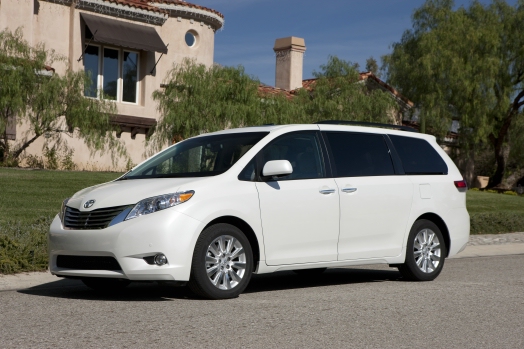 Toyota is taking the wraps off the 2011 Sienna today at the 2009 Los Angeles auto show.

The Japanese automaker says its third-generation minivan is becoming more carlike than ever.  With front- or all-wheel drive, and a choice of  four- or six-cylinder engine and in seven- or eight-passenger versions, the new Sienna will go on sale in February 2010.

Performance is said to be improved, with more of a driver's dynamic, but the 2011 Sienna carries over the previous generation's wheelbase. Two engines are fitted to the new Sienna: the base 2.7-liter four-cylinder puts out 187 horsepower, while the larger 3.5-liter V-6 churns out 266 hp. Both team with a six-speed automatic for an estimated 19/26 mpg in the four-cylinder Sienna, to 16/22 mpg for the V-6, all-wheel-drive version.

Though it rides on the same wheelbase, the 2011 Toyota Sienna has a cabin that's two inches longer. The added length allows it to sport some world-class seat travel for its second-row seats--but the Sienna still lacks the second-row in-floor storage found in the Nissan Quest and the Chrysler Town & Country and Dodge Grand Caravan.

We'll have more photos shortly. Stay tuned, and see our Bottom Line for an in-depth preview.