Today In Social Media: The Toyota 4Runner 'You In?' Campaign 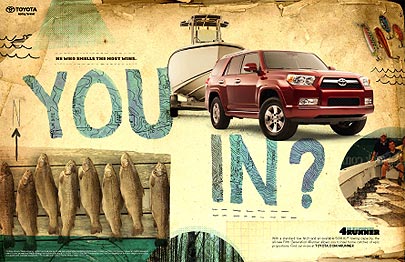 Toyota 4Runner 'You In' ad

Social media is the bold, new frontier of marketing: terra incognita, Wild West, Deep Space. Sites and services like Facebook, YouTube, Twitter, and Flickr allow advertisers to reach huge numbers of people at minimum cost and maximum speed; all companies have to do is post videos or photos of a product, make sure the right people see them (those folks Malcolm Gladwell calls "connectors", "mavens", and "salesman"), and the social nature of the web does the rest.

For automakers, social media has been a mixed blessing. Sometimes it's been tremendously effective, as in the case of Ford's "Fiesta Movement" campaign. That campaign gave the new Fiesta serious brand awareness -- the kind Ford would've had to spend tens of millions of dollars to achieve -- long in advance of the model's debut next summer. Other efforts haven't fared as well: when Honda published photos of the new Honda Accord Crosstour to the Crosstour's Facebook page,they were met mostly with derision and contempt by Honda fans.

Now, Toyota is rolling the dice on social media with its new campaign for the 4Runner SUV. The campaign asks viewers to remember the early days of SUVs, when they were seen as sporty, off-road vehicles for weekend warriors, not just convenient ways to schlep hordes of kids to and from soccer practice. In conjunction with the campaign, Toyota has created a website -- TrailTracker.com -- which encourages 4Runner owners to post photos and videos of trails they've navigated in their SUVs. As Mike McKay at Saatchi & Saatchi describes it, the result is a "Google Street View for trails", built almost entirely by fans. The campaign is primarily web-based, with supplemental ads in active-lifestyle magazines.

In our humble opinions, this could be a real winner of a campaign for Toyota. It's got great emotional appeal (tapping into the desire for independence and adventure), an easy-to-remember tagline ("You in?"), and it's making a pitch that few other SUV manufacturers are making. Says McKay: "[The 4Runner] is the last authentic SUV. All the rest have gone suburbia".

Moreover, this campaign -- like the 4Runner itself -- appeals to a huge demographic. Unlike the Fiesta Movement, which employed a hand-picked group of attractive 20somethings, Toyota's campaign is open to everyone. It might not play well in some 4Runner markets, but here in America, where rugged challenge is still a part of the national ideal, it may be a home run.