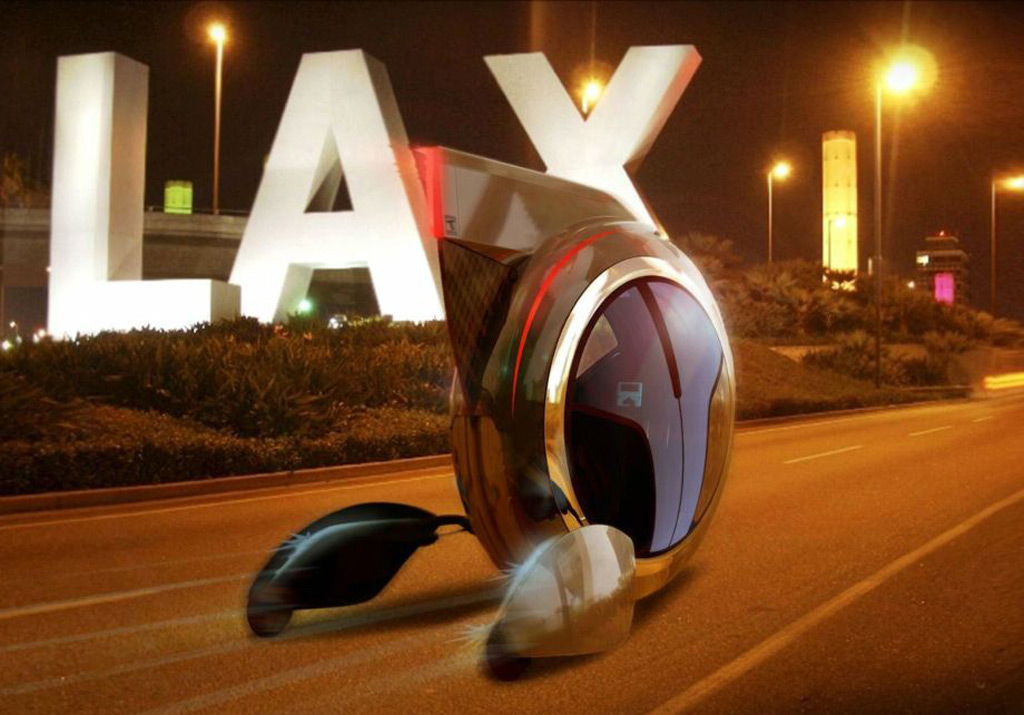 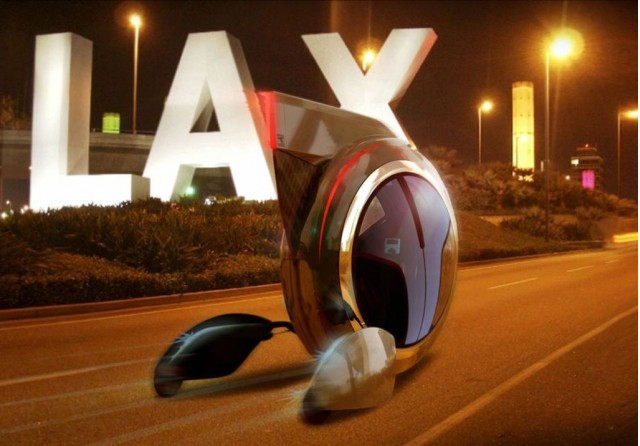 It's not quite the glamorous Staples Center--home to the Grammys and a certain celebrity endpoint this year--but just next door to the tabernacle of music sits the Los Angeles Convention Center. The convention center's the next roosting spot for the car world, as the industry sets down next month for the 2009 Los Angeles Auto Show.

The L.A. auto show is less than a month away, but some of the launches already confirmed for the show are underscoring the show's traditional split personality--it's the cutting edge for green cars but a haven for horsepower-addled supercars, too.

This year's L.A. show opens to the media on December 2-3, and it's open to the public from December 4-13. For more on visiting the show on your own, steer over to the LA Auto Show site.

But if you can't make it, we've got the solution for you. High Gear Media will be reporting live from Los Angeles, armed with cameras and voice recorders and really comfortable shoes to make sure you don't miss a beat. Our preview of what's to come follows here--bookmark this page and stay with us as we update you throughout the show itself: 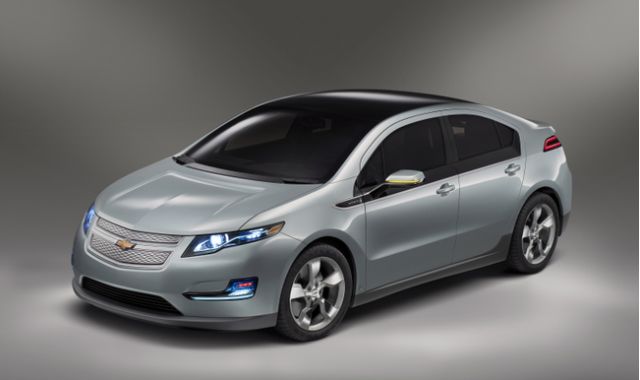 Remember last year, before Chapter 11 and all that drama, when we brought you the first photos anywhere of the real Chevy Volt? GM's new plug-in, extended-range electric vehicle (what you might call a "hybrid") finally sees the light of day at the Los Angeles auto show, after more than a year of teases. The automaker promises electric-only operation for the first 40 miles of range, powered by a 16-kwh lithium-ion battery; the battery can be recharged by the Volt's gasoline engine, which also runs on ethanol.This eliminates "range anxiety," which GM says comes from the fear of a depleted battery. GM says the Volt can be recharged in a standard 120-volt household outlet in about eight hours; on a 240-volt line, the Volt can be recharged in three hours. GM also estimates a recharge will cost less than a cup of coffee--whether they mean Starbucks or Maxwell House remains to be seen. Some 220 lithium-ion battery cells produce the equivalent of 150 horsepower and 273 pound-feet of torque. Top speed is 100 mph, but don't expect dramatically quick acceleration figures. 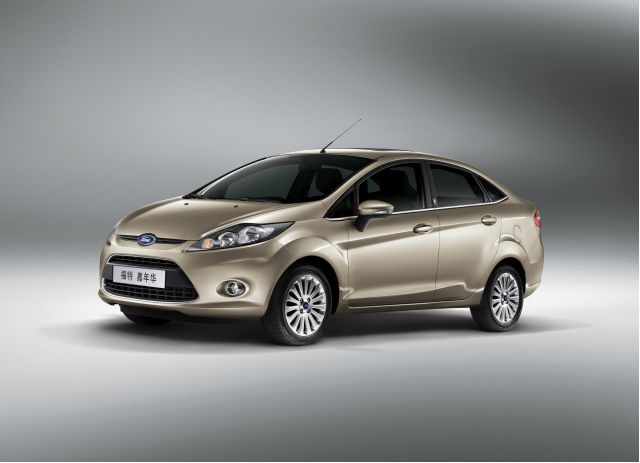 Ford confirms that its European-styled Fiesta hatchback is set to make its U.S. debut at the 2009 Los Angeles Auto Show in December. Since Ford started promoting the car through its Fiesta Movement back in March, more than 50,000 people have expressed interest--97% of whom currently do not drive a Ford. We've driven the 2011 Fiesta, and found it pretty brilliant. U.S.-spec cars are expected to feature a 1.6-liter four-cylinder gasoline engine with twin independent variable valve timing. This should ensure enough pep for the American palate, while likely planting the Fiesta among the most efficient non-hybrids on offer. Ford’s Sync communications and entertainment interface will be offered as well. We'll have more on new versions of the Fiesta soon. 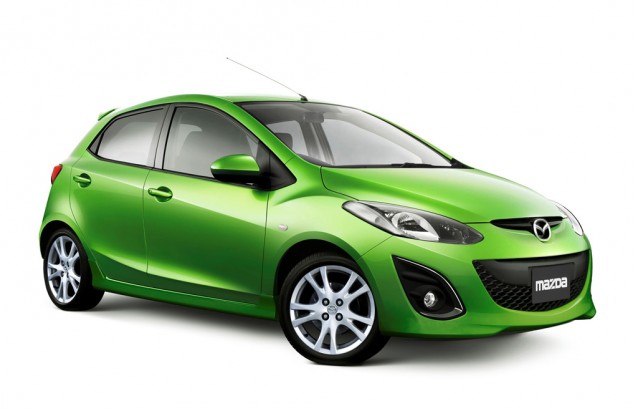 Even though compact hatchbacks haven't done very well in the U.S., Mazda's still keen on capturing its slice of future subcompact sales. So while the Ford Fiesta makes its way to market, the similar 2011 Mazda2 is getting a showcase at the L.A. auto show, too. The same Fiesta mechanicals get a zoomy Mazda body here, and with a lightweight body, Mazda's promising excellent handling for the class of vehicles that includes the Honda Fit and the forthcoming VW Polo. On sale in the fall of 2010, the Mazda2 is expected to carry a base sticker price of less than $15,000. 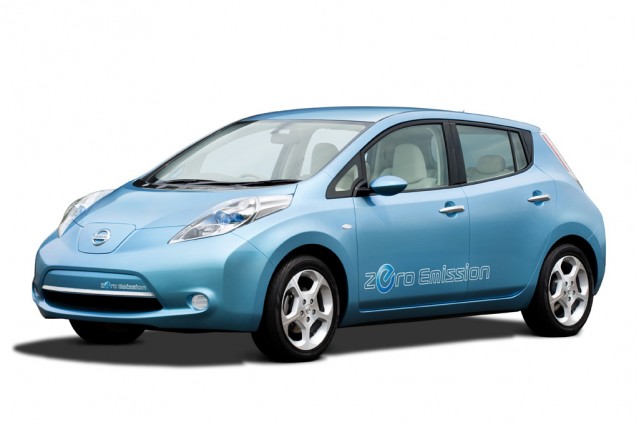 Electric vehicles will parade around the Los Angeles auto show, so long as the convention center's been pre-wired with lots of 240V outlets. The 2012 Nissan Leaf is one of the new EVs set for a Los Angeles debut. A five-seat hatchback about the size of a compact car, the Leaf is said to offer the interior space of a mid-size vehicle like, perhaps, the 2010 Toyota Prius hybrid. It is a dedicated design, meaning it doesn't share body panels with any gasoline vehicle. Nissan claims a range of 100 miles when its 24-kilowatt-hour lithium-ion battery pack is fully charged. An 80-kilowatt (108-horsepower) electric motor powers the front wheels.

Is it a big tease, or a real taste of the future? We've told you about Ferrari's plans for future hybrids, and Car and Driver reports the Ferrari gas-electric powertrain will arrive at the 2009 Los Angeles auto show in concept form. It's an experimental design that leaves gas power for the rear wheels, and sends electric power to the fronts for four-wheel drive. The Maranello hybrid system could be used on front-engined and mid-engined vehicles. Biofuels like ethanol are already being studied, as is turbocharging. 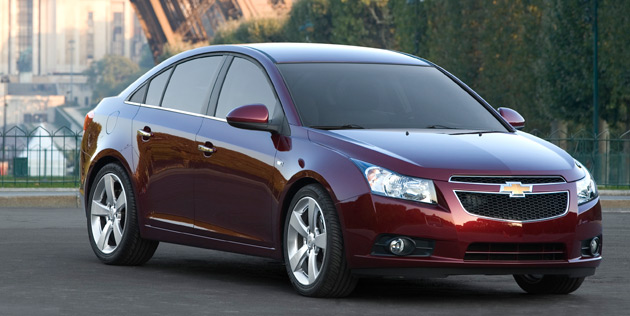 We've covered the Cruze elsewhere, but the final production version should show up in Los Angeles before an on-sale date next year. GM designers explain the Cruze's more sophisticated styling language is necessary for the more upscale compact. It's detailed like a luxury car, they say--and markedly smoother and rounder than the smaller cars, to our eyes. It shows up in the second quarter of 2010, and "eventually will replace the Cobalt," which implies some life after death for the current Chevy compact sedan and coupe. 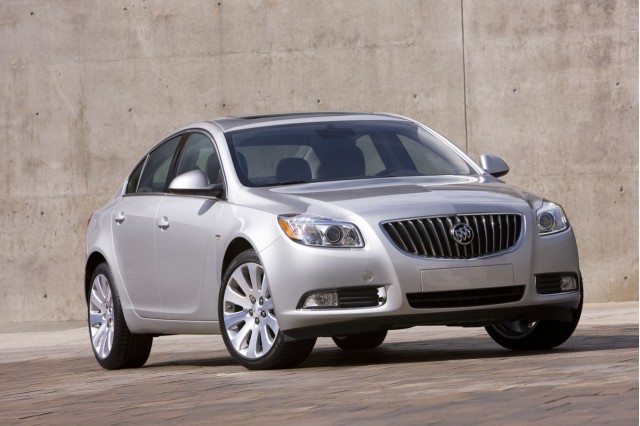 Just recently, GM revealed the details on the 2011 Regal. The relaunched nameplate will be applied to the car that's sold as the Opel Insignia in Europe, and was to be the new Saturn Aura in the U.S. Powertrain options will include the new, 182-hp, 2.4-liter four-cylinder and a turbocharged 2.0-liter four-cylinder with 220 hp. The latter's a surprise, since it's been expected that the Regal would get a V-6 engine--especially since Buick claims the Acura TSX and Volvo S60 are competitors. For the first model year, Buick says only the Regal CXL will be offered. In 2012 they promise other model versions, which likely means a V-6 is in the offing. A six-speed automatic is the sole gearbox, standard on both, with a manual shift mode. Buick estimates the smaller four will get 30 mpg on the highway, while the turbo engine will get 29 mpg highway ratings from the EPA. 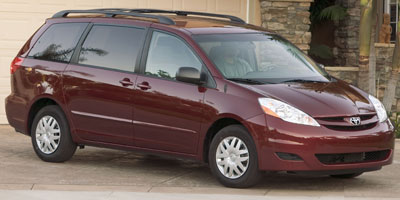 Minivans are a shrinking market, so it pays to reinvent them every so often, as frugally as possible. Toyota is doing just that by wonking the design of its Sienna minivan to fit the company's "MC" platform. The "MC" platform is noted for its flexibility, and its ability to accommodate vehicles ranging from the Camry to the RAV4 to the Highlander attests to it.  Toyota's confirmed the new Sienna will be on display in L.A., and we know that it'll begin production in January 2010 at Toyota's facility in Princeton, Indiana for the 2011 model year. Maybe folks will even be buying cars by the time it hits the lot. 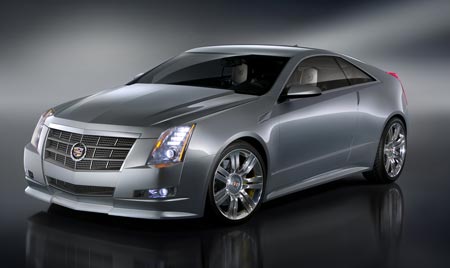 It seems like eons ago when we first showed you the dashing Cadillac CTS Coupe Concept. Last year at the L.A. show, it was headed for production. Then the world simply fell apart. Now that we've sort of duct-taped the U.S. economy back together, GM is proceeding with the launch of the oft-delayed two-door version of the Cadillac CTS. It shows up in showrooms in May, and when it arrives, the 2011 Cadillac CTS Coupe will be joined right away by a V-8 CTS-V Coupe, too. Otherwise it will share powertrains with the CTS sedan and the new 2010 CTS Sport Wagon we drove earlier this summer. 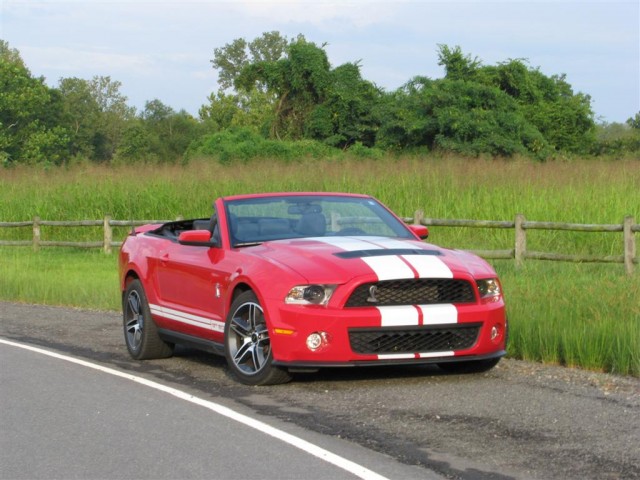 We've already heard that the 2011 Mustang is expected to get a pair of new engines--a 3.7-liter Duratec V-6 engine to replace the existing 4.0-liter unit in the current base Mustang. Ford's planning an L.A. reveal for the updated pony car. Power is expected to go up despite the drop in displacement, from 210 horsepower to a whopping 315 horsepower. That's about even witth the curren't 4.6-liter V-8's output in the Mustang GT, so Ford is upping the performance there, too, with the new 5.0-liter Coyote V-8, rated at 400 horsepower. Joining it is also a rumored twin-turbocharged, aluminum-block "Road Runner" version of the engine that could rate as high as 600 hp for the next GT500. We'll have to wait until December to find out for sure what Ford will be packing into the next Mustang, but if it's anything like the rumors, it's sure to be exciting. 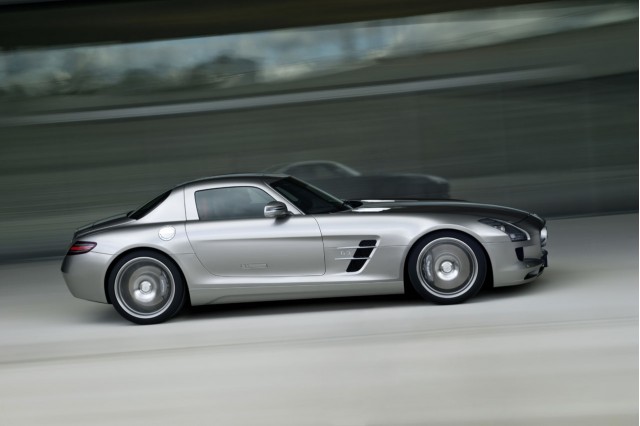 The successor to the legendary Mercedes-Benz Gullwing from the 1950s, and a de facto replacement for the SLR, the SLS AMG already has opened its north-south doors for the first time. MotorAuthority joined up with Mercedes-Benz in Monterey and Laguna Seca for the worldwide press launch crack at the revived gullwing, which has sprung from concept to reality in three years, but now Mercedes is ready to show it off to the hoi polloi. Philosophically it remains true to the original in a few definitive ways: it's still rear-wheel drive, it's still built on an aluminum chassis, and then, of course, there are the doors, its calling card. In almost all other ways, it's been transmogrified into a $200,000 supercar with few concessions to anything but power and traction. See our bottom line for more, and stay tuned for more photos and word on the possible Black Series SLS and the electric versions as well. 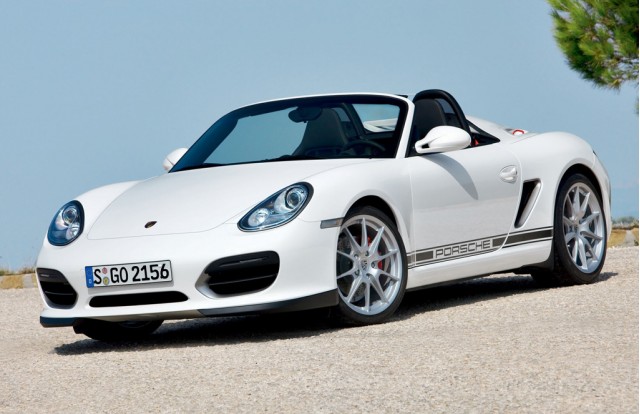 Looking back on some of the cars that made sport driving great, and built the legend that has become today's Porsche, you have to wonder how we ever got to 500-horsepower twin-turbo monsters. The 356 Speedster, for example--considered by many to be one of the first modern sports cars--weighed a mere 1,670 pounds and managed just 40 horsepower in some guises. It appears the Speedster has made a return, although this time around Porsche has used its Boxster as the basis. The new edition is called the Porsche Boxster Spyder and it’s set to make its world debut next month at the 2009 Los Angeles Auto Show before going on sale in February 2010. The Spyder is based on the Boxster S but it gets a small bump in performance, with its 3.4-liter flat-six engine developing 320 horsepower and 273 pound-feet of torque--the same as the current Cayman S. With 10 extra horsepower and minus 176 pounds of power-draining weight, the new Spyder shows up in L.A. with a $61,200 pricetag.