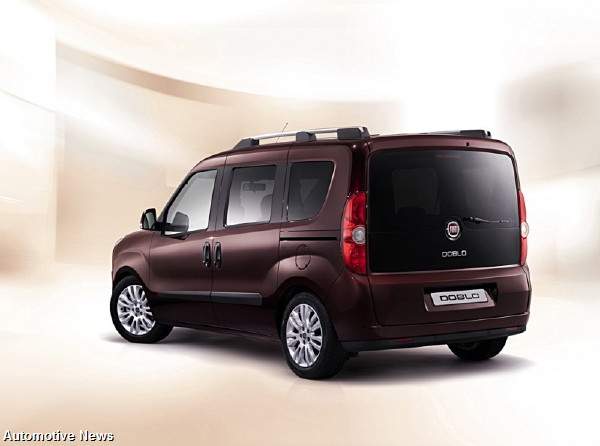 Over the past year, we've spoken a good bit about the 2010 Ford Transit Connect. Our own John Voelcker gave it a positive review after his test drive last May, and the fuel-efficient van aims to be a major contender in the American market. But before long, the Transit Connect will have some spirited competition: yesterday, Fiat announced plans to rebadge its revamped Doblo van and include it as part of Chrysler's new Ram lineup.

Of course, the Transit Connect will have a significant head start. Ford began selling it in the U.S. last July, but the Doblo won't arrive stateside until 2012. However, the Doblo launches in Europe this coming January, and the renderings look great -- considerably more stylish than the Transit Connect. In fact, a more apt comparison might be with the Honda Element, which is commonly pitched as a personal vehicle, but is often used for commercial purposes because of its clever, convenient layout. Also like the Element -- and unlike the cargo truck-ish Transit Connect -- the seven-passenger Doblo could conceivably look at home in any suburban garage.

Tech specs for the American Doblo haven't been revealed, but the European model offers five powertrain options -- one for gasoline, one for compressed natural gas, and three diesel engines. The Doblo has been touted for its roomy interior, long wheelbase, and low CO2 emissions. In Europe, it will come with a stop-start system to increase fuel economy.

Along with the Doblo (which will receive a different name in the U.S.), a larger Fiat-based Van will also be joining the Ram line up. Between those two vehicles and refreshes of existing Ram trucks, Chrysler hopes to ramp up sales of its rugged new brand by nearly 50% over four years -- from 280,000 in 2010 to 415,000 in 2014. We're not clairvoyant, but if the rest of the Ram lineup is as interesting as the Doblo, Senator McCain might want to rethink some of his recent statements.