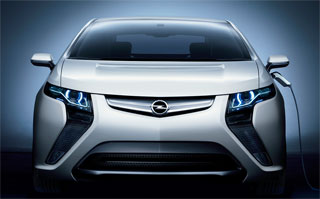 It’s official. The boss of Opel, Carl-Peter Forster, will be leaving his role as head of the European operation and will advise the company during the transition to find a new CEO. Who will that be? Rumor has it, none other than GM’s own Bob Lutz. [Motor Authority]

You know hybrids have really caught on when some of the most exclusive of brands start considering them. The latest is Rolls-Royce, which is reportedly working on a hybrid version of its upcoming Ghost. [Autocar]

Nissan’s other half, French automaker Renault, has confirmed plans for four new electric cars that will be launched in 2011. Sadly, the chances of any of these making it the U.S. are next to none. [Carscoop]

Nissan is planning several new electrics of its own, the latest being an all-electric commercial van. The automaker has released a sketch of the vehicle, which it plans to launch in the next couple of years. [egmCarTech]

A radical new sports car from Australia by the name of Skelta is being sold in global markets for the first time. Powered by Honda S2000’s 2.0-litre VTEC engine or a more powerful 3.0-liter Hartley V-8, Skelta’s new sports car is for extremists only. [EVO]

Ford is working on a new inflatable seat belt system that it plans to debut on the next-generation Explorer SUV that’s due next year. Ford's new system incorporates small air bags inside the rear seat belts and deploy during a crash, helping to spread the force of impact over a wider area. [The Detroit News]