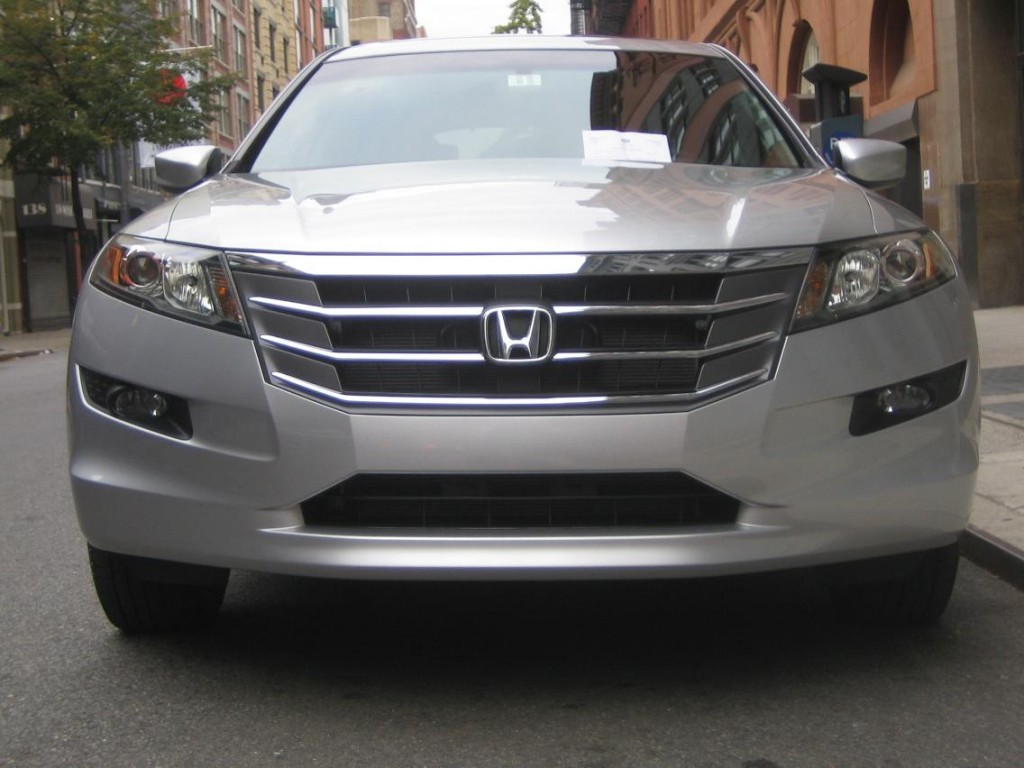 Crossovers are all the rage these days, meaning vehicles somewhere between the practicality of a station wagon and the taller, tougher all-wheel-drive aspects of a sport utility vehicle. They take many forms, and wear an increasing diversity of styles.

Now Honda's gotten into the game, applying the hallowed Accord model name to what it calls an "active grand tourer," the 2010 Honda Accord Crosstour. It's the first-ever Accord with all-wheel-drive.

We'd say it's a largish five-door hatchback, but the H-word is verboten these days. Like the 2010 Toyota Venza, against which it competes (along with the 2010 Ford Edge, 2010 Mazda CX-7, and 2010 Nissan Murano), the Accord Crosstour tries to be more stylish than earlier SUV-like crossovers. (The grandaddy of this category, now out of production, was the Chrysler Pacifica.) 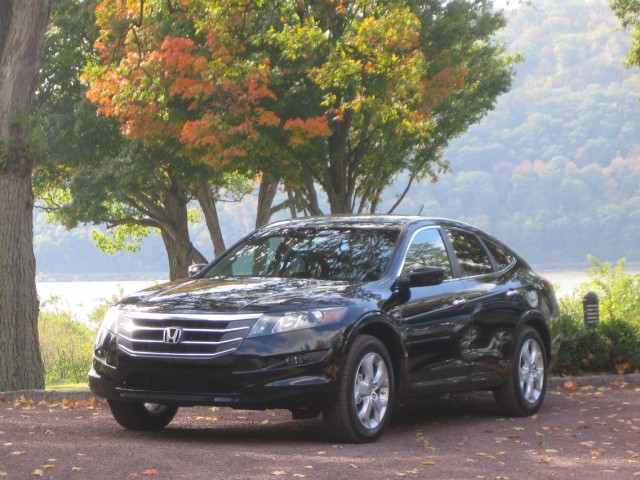 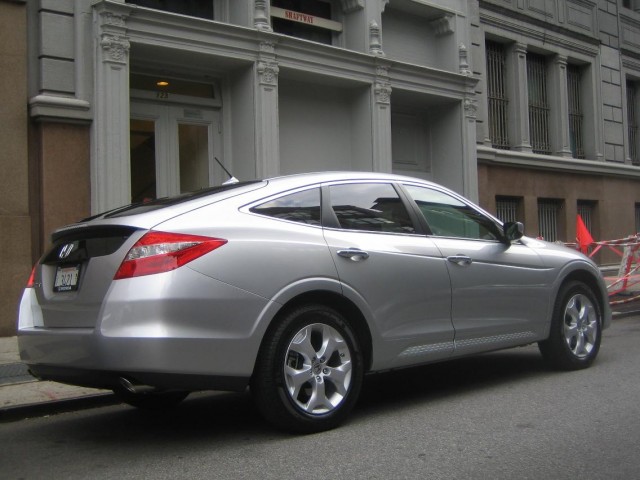 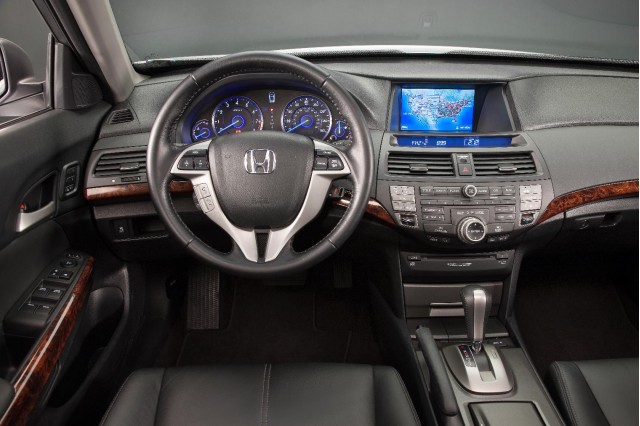 But whatever you call it, the Crosstour expands lots of typical Honda virtues--pleasant driving, tight handling, usefulfeatures, and pretty good gas mileage for its size--into a new category, giving Accord owners a more flexible and capable vehicle to move up to.

The 2010 Honda Accord Crosstour comes with a single engine and transmission, just two models, and optional all-wheel-drive. The pricing is competitive, and we think it should do well. If, that is, you are OK with its looks.

You can read our full Bottom Line on the 2010 Honda Accord Crosstour. Breaking it down, the aspects we liked included:

But we had some qualms too:

Honda was clearly caught off guard by what it delicately called "interesting and challenging feedback" to early photos of the 2010 Honda Accord Crosstour. The hump-backed rear end just looks awkward from many views, and the shape will be--to put it gently--an acquired taste that's not for everyone.

From the front, the swept-back lights and fenders wrap around a grille that's recognizably Honda, but deeper and chromier than on the Accord sedan or coupe. It's behind the rear doors where it all goes wrong. The need for headroom and cargo space simply clashed with the stylists' goal of avoiding the upright, boxy look of an SUV. Nor does it offer the jaw-dropping "wow" factor of the 2010 Acura ZDX.

We have to admit the Honda Accord Crosstour looks better on the street, from eye level, than in automotive photography taken from knee height. The tail isn't as bulbous and the high rear end doesn't seem quite as precarious.

It's taller and bulkier, but the 2010 Crosstour drives and handles like a Honda Accord. And that's a good thing. There's little body roll, it grips the road nicely, and the ride is smooth but not soft. Honda really worked on the body stiffness, often hard to do with a huge opening at the rear of the structure, as well as the aerodynamics.

Honda wouldn't tell us the drag coefficient--it seems they don't discuss that number for any of their vehicles--but said it was equivalent to a sedan's. The Accord Crosstour shrugged off side winds, in any case, though we heard a bit more wind noise on a blustery day than we would have liked. When we do a full road test, we'll find out if that was just a pre-production vehicle glitch. 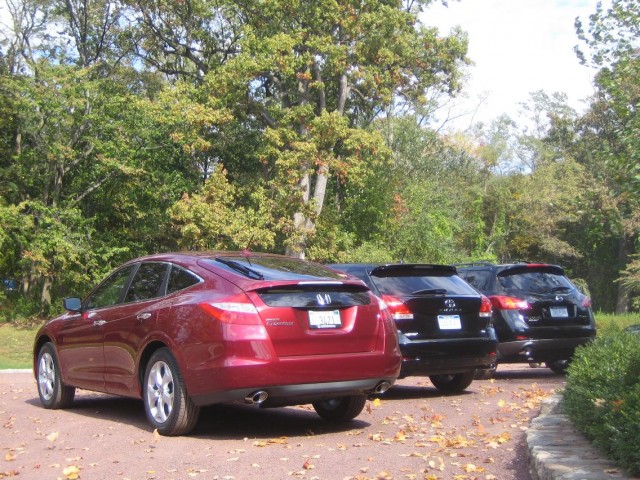 There are no engine or transmission choices to make in the 2010 Honda Accord Crosstour. It comes with just a single combination, a 271-horsepower 3.5-liter V6 with variable valve timing that's paired with a five-speed automatic.

To maximize mileage, the transmission is tuned to say in high gears as much as it can, so it sometimes downshifts two gears under load. Still, the Crosstour doesn't feel underpowered, and the "downshift rev matching" that Honda has added on deceleration ensures the engine is at the right speed to respond if power is needed.

With the highest average fuel economy of any full-line manufacturer in the U.S., Honda takes gas mileage seriously. The 2010 Accord Crosstour is rated by the EPA at 18 mpg city, 27 highway in two-wheel-drive form, though adding all-wheel-drive cuts it down to 17 mpg city, 25 highway.

However, unlike several of its competitors, the 2010 Accord Crosstour doesn't offer a four-cylinder engine option at all. The 2010 Toyota Venza with the 2.7-liter four and a six-speed automatic, for instance, returns 21 mpg city, 29 highway, in comparison.

We particularly liked the seating position of the 2010 Honda Accord Crosstour. While it's taller than the sedan, with 6 inches of ground clearance, it feels inside just like a car. The front seats are predictably comfortable and supportive, with standard power adjustment. Two six-footers can sit comfortably in the rear seat, though we wouldn't advise three for very long.

Honda offers a number of convenient and functional cargo-area touches, including rear-seat fold-down levers located just inside the tailgate (no reaching) and a light for the 25.7-cubic-foot cargo bay.  Below the rear deck is a hidden 1.9-cubic-foot box.

Our major complaint about the Crosstour's load bay is the strut towers, which protrude from each side to narrow the floor width to a mere 30.9 inches. Other crossovers--we're thinking in particular of the 2010 Subaru Outback--use other kinds of rear suspension to avoid the intrusive strut towers. By comparison, the Outback's load bay width is almost a foot wider at its narrowest.

The model lineup for the new 2010 Accord Crosstour is simple. There are EX and EX-L models, though all-wheel-drive and navigation are offered only on the EX-L. The EX has a base price of $30,380 (including the mandatory delivery charge), and a top-of-the-line model can go as high as $36,930.

The base EX version is well equipped, with a moonroof; dual-zone air conditioning with second-row vents; a 10-way power driver seat with lumbar adjustment; and a 360-Watt 6-disc AM/FM/CD player with 7 speakers. If you want to upgrade, the EX-L adds leather seats and trim; memory settings for mirrors and driver seat; front seat heaters; and a Bluetooth hands-free phone link.

Especially in vehicles that may see family duty, safety is mandatory. The 2010 Honda Accord Crosstour is well equipped, including the usual plethora of airbags in the front, front-passenger side, and side curtain, along with active head restraints.

Anti-lock brakes with brake assist in emergencies, traction and stability control, and a tire pressure monitoring system lead off an array of active safety features. Neither the National Highway Traffic Safety Administration (NHTSA) nor the Insurance Institute for Highway Safety (IIHS) has released crash-test results for the 2010 Honda Accord Crosstour.

The rearward visibility is acceptable, but drivers will see their rear view in the mirror divided by the line of the horizontal bar separating the rear window from an Insight-style small vertical pane below it. You can only have a backup camera, as noted above, if you order the $2,200 navigation system.

TheCarConnection's experts review every new vehicle, offer tips and advice on car shopping, and let you compare cars before you buy

MotorAuthority puts you in the driver's seat with the latest luxury and performance-car news, reviews, spy shots, and auto show coverage

CelebsandCars snoops into the semi-private lives of the stars, and shows you how they roll