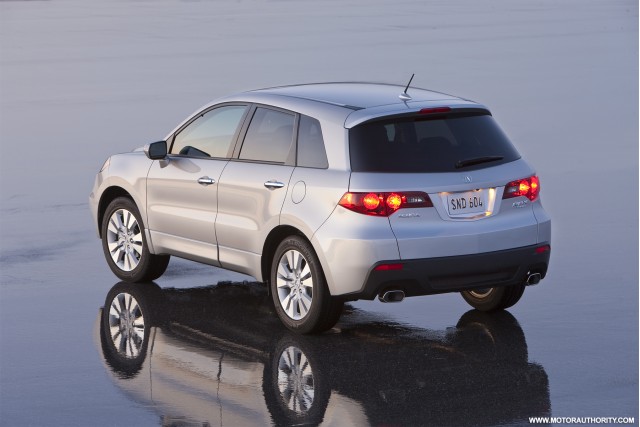 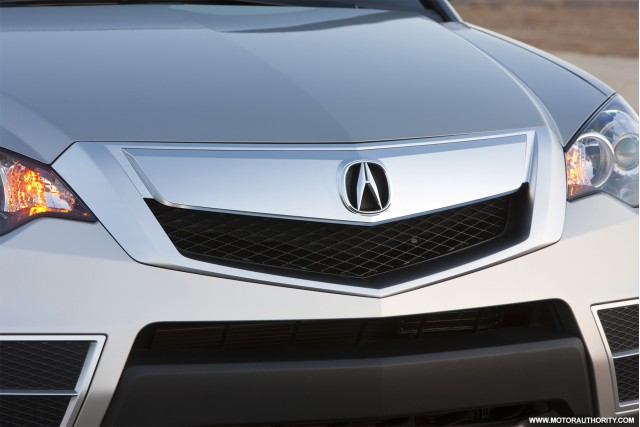 Cutting through marketing hype, the Acura RDX is one of relatively few crossover vehicles that actually do feel like agile sport sedans—especially if you'd like to keep the price well under $40k. That is, provided you're one of those people who won't consider wagons like the BMW 328i Sport Wagon, Cadillac CTS Wagon, or upcoming Acura TSX Sport Wagon. Both the BMW X3 and Audi Q5 are both well over the $40k mark after you add just an option or two. The Mazda CX-7 is one of them; Mitsubishi's upcoming Outlander GT also looks like the real thing. But other than that, if you want a vehicle that's luxurious, too, your only two choices are the Infiniti EX35 and the Acura RDX.

The Acura RDX is the older design of these two; it's already been on sale in the U.S. for three years, but it still manages to look quite fresh. And thanks to some subtle changes for 2010, it's been updated nevertheless. For 2010, the RDX gets its own version of Acura's controversial grills, along with new bumper fascias, slightly different headlight and taillight designs, new exhaust tips, and satin brightwork throughout. Inside, the RDX gets a similar touch-up, with new ambient footwell lighting, a compass, a pull handle for the hatch, automatic headlamps, USB connectibity, and an XM satellite radio Note function for the sound system. Plus, there are some improvements to interior storage.

Of note for 2010 is that the RDX is now offered for the first time in a front-wheel drive model—which costs $2,000 less and gets 2 mpg better both in the city and on the highway, for EPA estimates of 19/24 mpg.

We, however, just got a follow-up drive in an all-wheel-drive 2010 Acura RDX, loaded with the Tech Package and pricing out at $38,430.

First impressions? The engine—2.3-liter i-VTEC turbocharged four-cylinder, making 240 horsepower—initially gives no hints (except if you spot the boost gauge in the dash) that it's the only turbocharged one in Honda/Acura's U.S. lineup, and the first for the automaker to ever bring to this market. It settles into an isolated, distant purr that's worthy of a luxury vehicle. 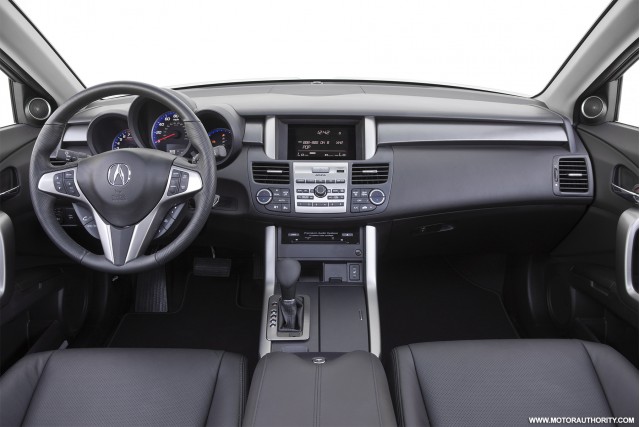 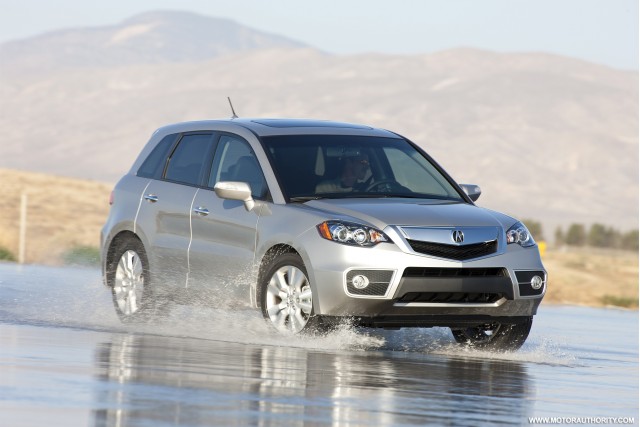 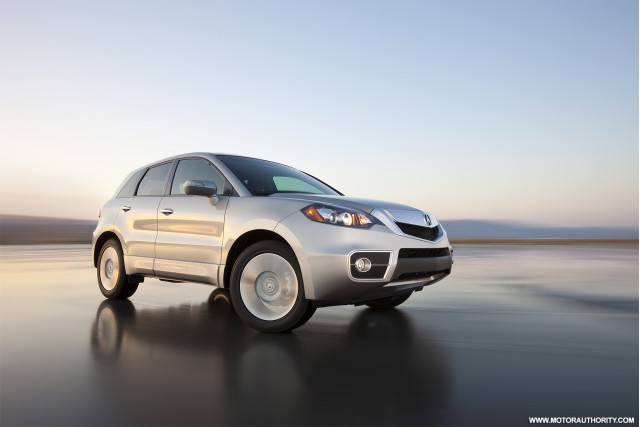 Only when you take off the road at a moderate pace are you alerted to the fast that power delivery isn't quite as measured and predictable as you might have guessed. Since torque off the line isn't stupendous, you'll find yourself stepping on the gas a little too hard from stoplights or out of corners, only having to back off when the engine really comes alive and the boost arrives. And though you don't hear the engine much from inside the RDX—even on full throttle—crack the window just a bit and it makes all the right sounds on the outside; back off the throttle when you're into boost and you get some nice wastegate music.

The transmission—or rather, the way the transmission coordinates with the engine—was about the only thing that prevented us from feeling that the RDX approaches perfection. Going lightly into the throttle, the transmission felt consistently lumpy on the shift from first to second; accelerating moderately, it smoothed out. Also, we felt an unrefined torque-converter shudder whenever we'd backed off at highway speeds and then reapplied the throttle. From Drive, you can manually select a gear with the paddle shifters on the steering wheel, but it will hold that gear for just a few seconds unless you have the selector in 'S' (Sport).

The powertrain proved reasonably good on gas; we averaged 20 mpg in about 80 miles of driving, split about equally between low-speed city driving, highway cruising, and foot-to-the-floor performance testing. But pricier premium fuel is strongly recommended.

Steering feel is way better than you'd probably expect in a crossover vehicle—even one with a performance edge. The RDX's steering wheel feels very naturally weighted, actually gives some feedback of the road surfaces, and returns to center without ever feeling artificial. On-center feel is quite light, without that artificial heft you find in some newer vehicles, yet it doesn't require frequent adjustments.  And the RDX's SH-AWD system expertly sends more power to the wheels that can use it the most. On a soggy day, around a smooth ramp, we felt this dance a little more intimately. There, the RDX's front end plowed first, sending more power to the back wheels, then it felt as if the stability system and all-wheel drive reached a harmony of sorts, compromising at a very slight state of understeer. It's all-weather confidence inspiring, and more fun than you'd expect in a crossover.

Supposedly, braking-system components have been updated for 2010; although this reviewer can't reach into the archives accurately enough to remember what they were like in the previous RDX, they feel perfectly boosted with a nice, firm pedal.

The 2010 RDX feels quite firmly damped but moderately sprung, so while it turns in with relative crispness, it's designed to keep it safe yet satisfying for any sane driver's needs on a curvy road while also absorbing major heaves quite well. The downside is that the RDX's ride is busy; it's not jarring, but it gets thrown around by pitchy surfaces. Positively, there's little or no road noise and wind noise. 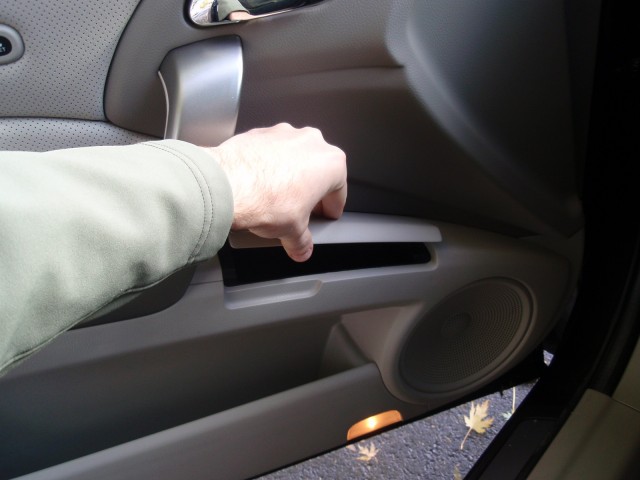 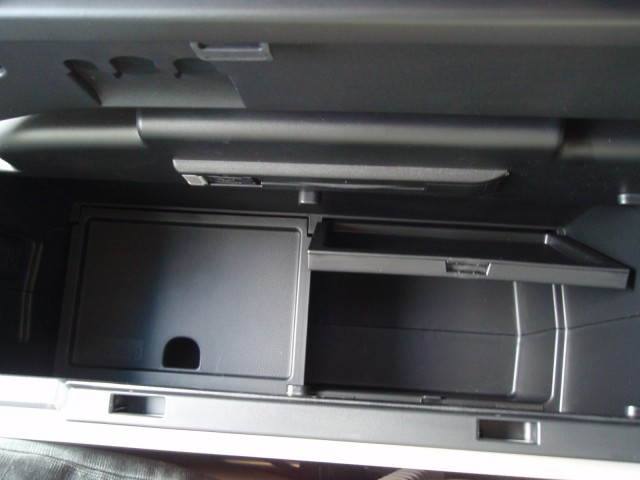 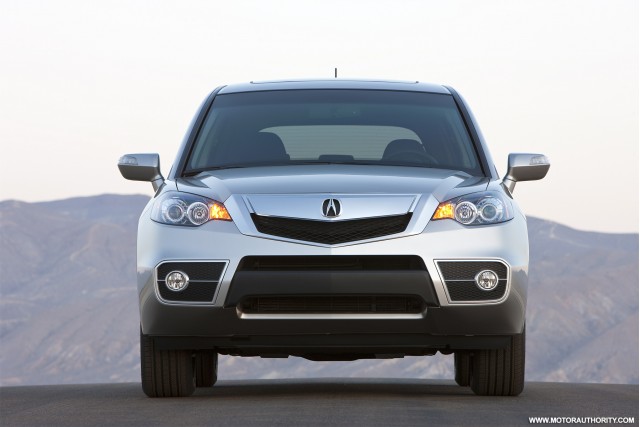 Compared to the more cramped, coupelike interior of the Infiniti EX, the RDX doesn't involve much compromise for a curvier exterior or more aggressive stance. There's enough headroom all around, but in back the cushions are rather hard and flat and only wide enough for two adults. Also, the backs of the front seats are finished in hard plastic, which adult knees will likely be up against. The downward sloping roofline cuts into the cargo area a bit, but fold the back seats forward for larger items and you're golden.

The interior has some hits and misses. Purely from a style and design perspective, the instrument panel is beautiful and well sculpted, with a two-tiered look complemented with well-placed brightwork and accents, along with the deep, hooded gauge cluster. But we found, as we have on other Acuras, the control layout—especially for audio—to be cluttered and needlessly complex. We liked the climate and sound system display right up against the base of the windshield, but thought that the display didn't have enough characters to handle satellite radio, let alone MP3s. The nav system's display screen was prone to reflections but we liked its menu system as well as integrated real-time traffic and weather (part of the Tech Package).

The Acura RDX has a plethora of handy storage places for things—and not only the small stuff. The center console has [shhhh…] a false bottom, which has a space underneath large enough for a purse, while the main compartment is lockable and large enough for a laptop. At the top there's a shallower tray that can be removed. In addition, there are smaller cubbies in the middle and side of the dash, and the doors have lidded compartments for other small items. For 2010, cupholders have also been improved.

Fit and finish in the RDX is excellent; we were hard-pressed to find anything to nitpick; seats are upholstered in rather soft ventilated leather, controls nearly all have a pleasant tactility, and there's no looseness in the door panels or center console. Furthermore, visibility isn't the issue it is with many other crossovers, thanks to the rather low beltline that carries throughout the vehicle.

Overall, there are vehicles that feel a more athletic, have plusher interiors or offer more features than the 2010 Acura RDX; but if your family needs a vehicle with a high-utility shape but you really wanted a sport sedan, the 2010 Acura RDX should leave everyone happy.