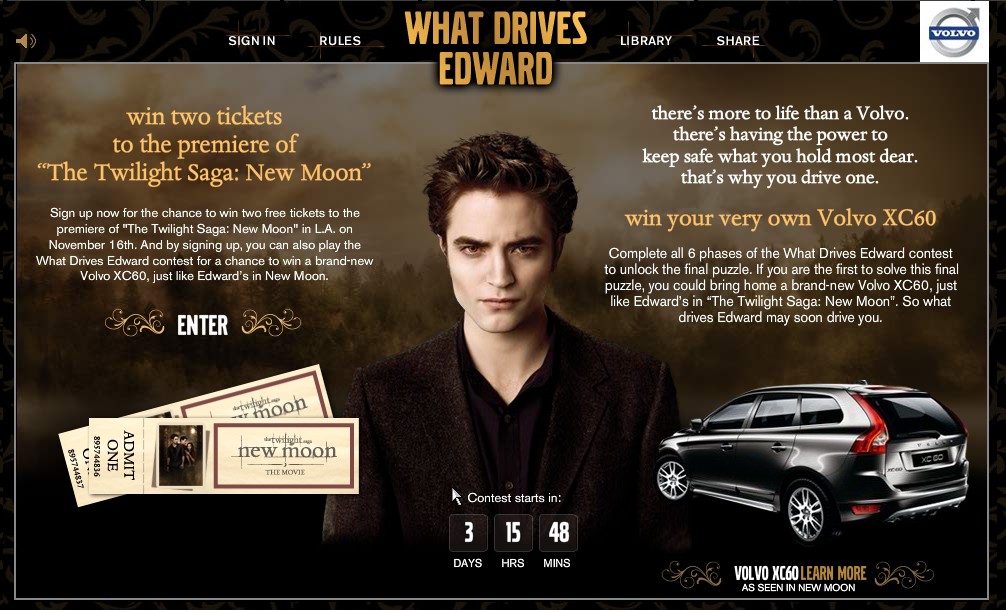 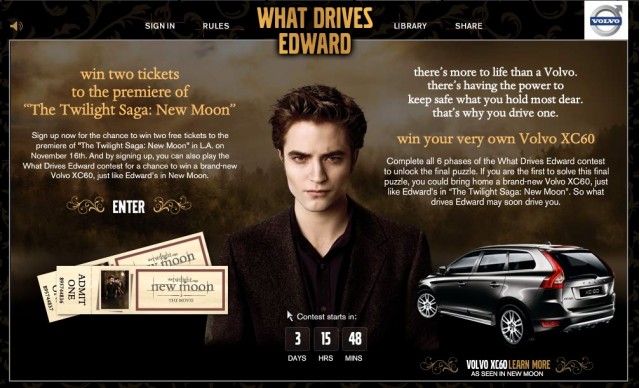 A couple of months ago, we mentioned that Volvo had paid for product placement arranged to have its products placed in The Twilight Saga: New Moon. Now that the movie is prepping for a November release, Volvo has upped its marketing game by launching WhatDrivesEdward.com. The microsite highlights the Volvo/Twilight alliance and gives visitors a chance to win tickets to the film's Los Angeles premiere as well as a brand-new Volvo XC60.

And that's great. As the second film based on the absurdly popular Twilight novels by Stephenie Meyer, we're sure that New Moon will do well at the box office, so if it's exposure that Volvo wants, they're on the right track. Our only question would be: is Volvo exposing itself to the right people?

As far as we know, Twilight is almost entirely a tween and teen phenomenon. Its target demographic skews a bit older than, say, Harry Potter, which means that the many, many kids who see New Moon are going to see it with their peers, not their parents. (If the books and movies appealed to younger children, however, the audience would likely boast lots of moms and dads with kids in tow.) As with any product, there are certainly fans outside the target demo, but we're guessing that the Twilight audience drops off steeply after age 25 -- which is probably too young to manage the XC60's $32,000+ price tag. [NB: A rep from Volvo weighs in below on this very matter. We stand corrected.]

So what's the tie-in? Volvo could just be looking to build brand recognition among young people -- but if so, we think they might chose a film with slightly broader appeal (think Transformers). Or maybe Volvo is just after celebrity endorsements -- although it's pretty well known that Robert Pattinson drives a Porsche Boxster. Yes, it looks very nice, but the Volvo XC60 isn't quite R-Patz's style.

As far as we can tell, the biggest tie-in between Volvo and Twilight seems to be that New Moon was shot in Vancouver, which looks a little like Sweden if you squint. Or maybe Twilight is really popular with wealthy adults in China, Volvo's potential new home.

That said, who are we to turn down a contest, much less free stuff? While we click through to the website, y'all can skim the press release below and let us know if we've missed any crucial info.

WHAT DRIVES EDWARD CULLEN MAY SOON DRIVE YOU

ROCKLEIGH, N.J. (Oct. 27, 2009) – Know what Edward Cullen drives?  Volvo is putting a challenge out to all Twilight fans by launching a new online promotion in conjunction with the release of Summit Entertainment’s The Twilight Saga: New Moon.  Fans can visit www.WhatDrivesEdward.com and enter for a chance to win a pair of tickets to The Twilight Saga: New Moon world premiere in Los Angeles on Nov. 16 and an opportunity to meet select members of the New Moon cast.

Starting November 1, fans have the chance to win a shiny new Volvo XC60 just like the one Edward drives in New Moon. By logging onto www.WhatDrivesEdward.com and putting their Twilight saga knowledge to the test in an interactive game-like contest, fans will be in the running for Volvo’s newest, highly acclaimed crossover featuring City Safety, a unique safety system designed to help the driver avoid or reduce low-speed collisions that are common in city traffic.

“Volvo is central to Edward’s character in the Twilight saga,” said Doug Speck, president and CEO of Volvo Cars of North America. “One lucky fan will be the first to solve all of the puzzles in Volvo’s What Drives Edward contest and win a new XC60. While the XC60 doesn’t come equipped with a vampire, the winner will experience the power, beauty and protection that is Volvo—and it will transport them to all of their great moments in life.”

How the Volvo What Drives Edward Contest Works
Starting Nov. 1, players can register at www.WhatDrivesEdward.com and will receive clues to help solve a series of puzzles. Since the puzzles increase in difficulty, players are encouraged to exchange hints through Facebook, Twitter and MySpace. The contest runs for three weeks from November 1 through November 23.

In addition to the contest, fans can watch trailers from the film, check out photos in the gallery and download New Moon-themed desktop wallpapers at www.WhatDrivesEdward.com.

Fans that don’t win the online contest and want their own new shiny Volvo XC60, just like the one Edward drives, can visit a local Volvo retailer or go to www.volvocars.com/us to build their own. Edward's XC60 features the Saville Grey metallic exterior, a sandstone beige/espresso interior, a cream leather steering wheel,19-inch Achilles diamond cut wheels and exterior accessories such as side scuff plates, front bumper bar and rear skid plates.

In addition to the United States the online promotion will run in Canada, the United Kingdom and France where fans in those countries collectively will have a chance to win two tickets to the world premiere and a winner in each country will be awarded a shiny new Volvo.  Fans in Germany will be able to compete in the online game and win a car as well.

The Twilight Saga: New Moon opens in U.S. theaters November 20.  In the film directed by Chris Weitz and starring Kristen Stewart, Robert Pattinson and Taylor Lautner, the romance between mortal and vampire soars to a new level as Bella Swan (Stewart) delves deeper into the mysteries of the supernatural world she yearns to become part of—only to find herself in greater peril than ever before.  Following Edward Cullen’s (Pattinson) departure from Forks, Washington, Bella discovers his image comes to her whenever she puts herself in jeopardy.  In time Bella’s frozen heart is gradually thawed by her budding relationship with Jacob Black (Lautner) who has a supernatural secret of his own.