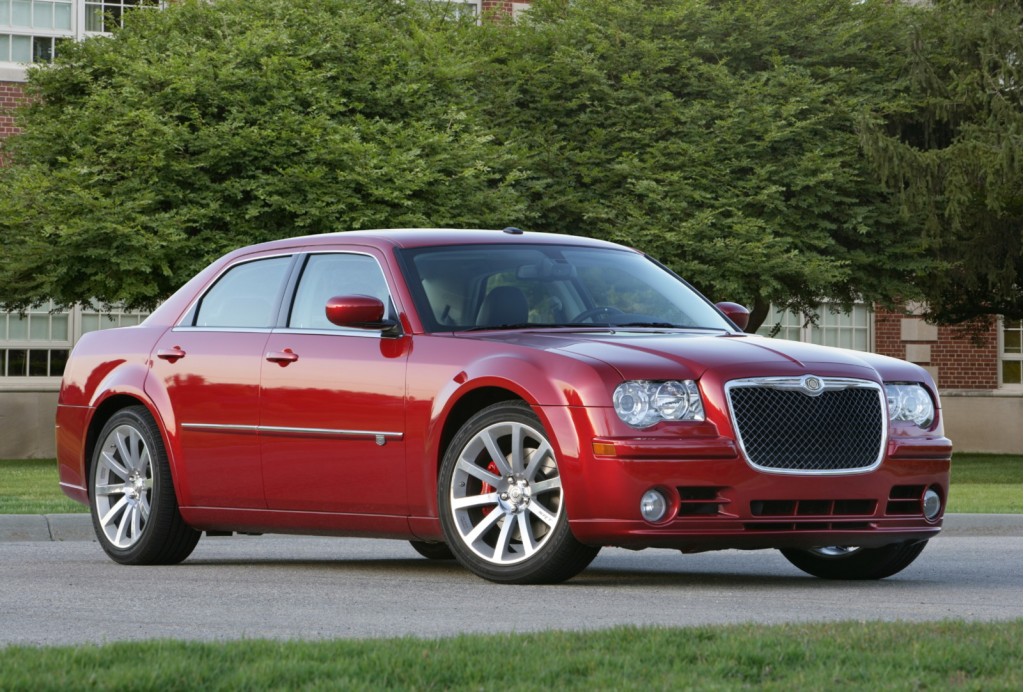 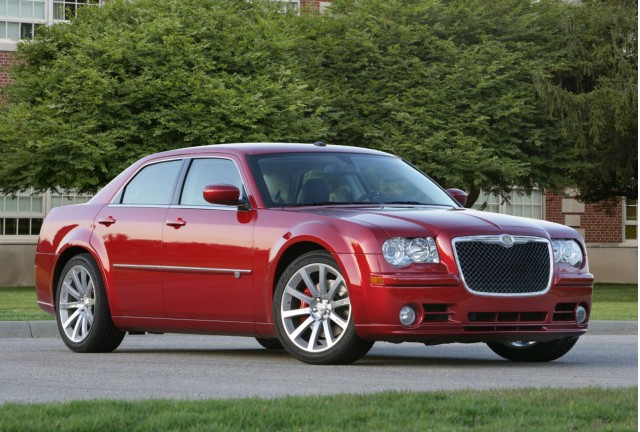 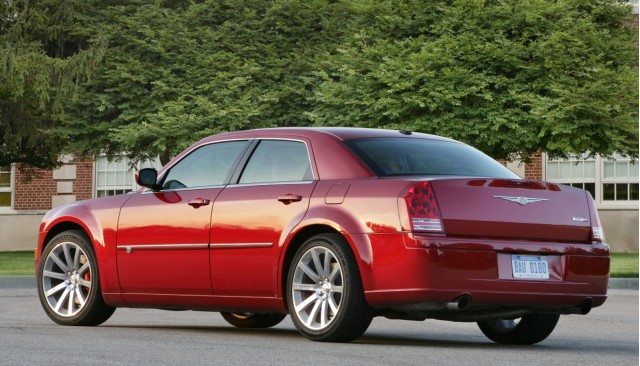 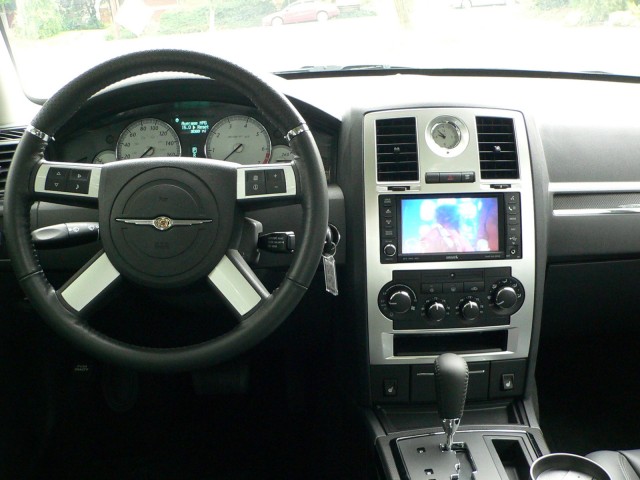 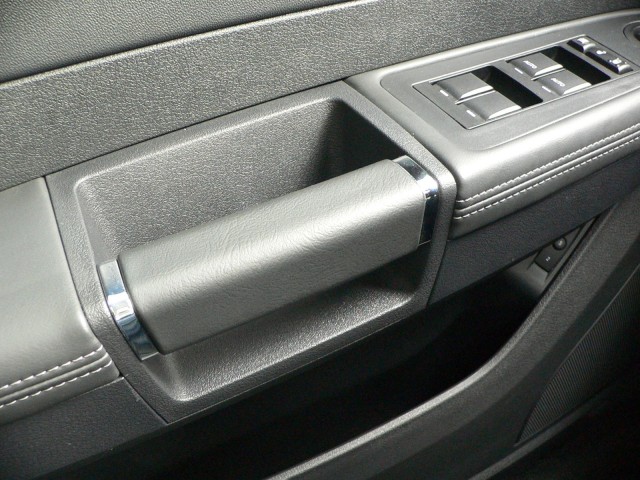 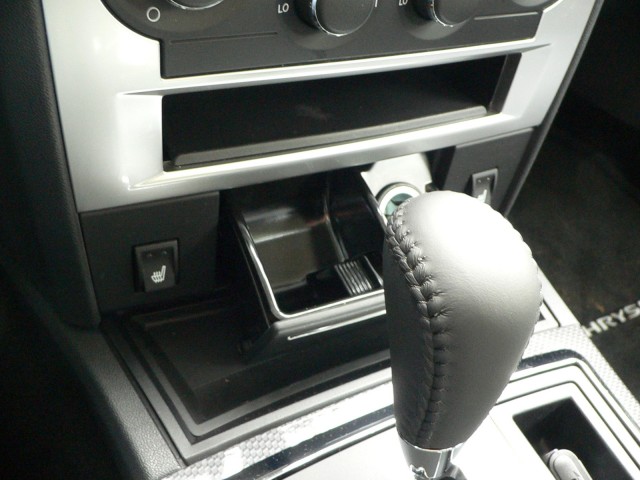 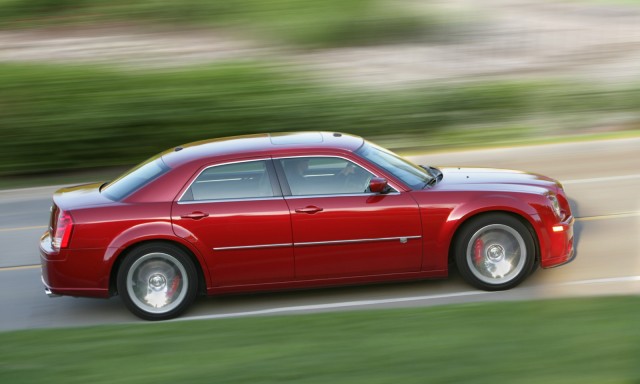 It's hard not to think of Chrysler 300C SRT8, a big, boxy sedan, powered by a mammoth 6.1-liter V-8 engine, as a novelty…and a prime example of the type of vehicle whose days are numbered.

For years we've been hearing that there's no replacement for displacement, no substitute for big cubes, but times are changing. With the new 2010 Taurus SHO, Ford has shown that it's possible to engineer a large performance sedan with just six cylinders, thanks to its turbocharged 'EcoBoost' line of engines. But it's going to be a challenge to keep these honkin' big-displacement V-8s around in large numbers, considering the new fuel economy and emissions regulations recently detailed by the federal government.

Five years after its original introduction, the 2010 Chrysler 300 still looks classy and uniquely American, with a mix of boxy proportions, chunky cues, and softly curved sheetmetal. The 300C SRT8 performance model takes it up a notch, with enhanced body work all around, a slightly lower stance, and big 20-inch performance tires and spoked wheels that allow you to see the red brake calipers beneath.

Inside, this isn't a car for initial impressions. The first thing you're likely to focus in on—and the centerpiece of the dash—is the chintzy-looking faceplate that surrounds the nav system screen and all the center-stack controls, with some cheap-feeling climate-control knobs and instrument-panel materials that feel like what you'd expect in a $20,000 vehicle, not a $50k one.

But just as I was ready to poo-poo this big-cube performer as a dinosaur, a funny thing happened: I ended up loving it. The 300C SRT8 feels remarkably nimble (despite its more than 4,000-pound curb weight) and smaller than its large-midsize footprint on urban streets and tight corners; yet out on the open road it has the hefty high-speed feel of a big V-8 German luxocruiser. Isolation of irregularities and coarse surfaces is superb, with very little road or wind noise. All the while the big V-8 thrums along at low revs unless you're really getting into the throttle.

That constant burble of the exhaust hints at the potential that's kept well under wraps during normal driving and cruising. A smooth, linear throttle makes leisurely takeoffs no problem, and you don't need to worry about peeling out inadvertently in front of a police cruiser. But stomp your right foot down and a different personality is unleashed, with a raucous and raspy-sounding yet smooth release of higher-rev thrust.

The 425-horsepower Hemi in the 2010 SRT8 revs happily into its upper ranges, but it's equally exuberant just off idle (turn off the stability control and you'll be rewarded) or just at 3,000 rpm or so. Use the AutoStick manual control to lock in third gear (actually holding it, unlike some other systems) and the Hemi leaps forward with just as much inspiration as if you'd let it downshift to second in Drive. On and off the throttle, the nimble feel is accented by the powertrain's substantial engine braking—even in the upper gears. It won't coast for ages once you take your foot off the gas.

The only dynamic complaint in the driving experience is that while the Chrysler 300C SRT8 feels happy to be thrown around tight corners, the steering stays a bit too light, at times making us overadjust when we needed to round the slightest of corners or steer just off center.

Although the 300C SRT8 comes with dismal EPA ratings of 13 mpg city, 19 highway, it didn't prove as much of a guzzler in the real world. We averaged more than 17 mpg overall in an equal mix of city and highway driving, taking full advantage of the V-8's brawn whenever we could. Over years of testing vehicles and noting mileage, TheCarConnection.com advises that in vehicles with extremely large displacement engines, you'll see close to the same mileage whether, within reason, you drive gently or aggressively; but smaller-displacement engines are much more sensitive to driving style.

The interior impressed us as tight and rattle-free, again with a chunky design that's like no other. But take a closer look and it feels like a grab bag of both premium and cut-rate. Among the more favorable aspects are the heavily bolstered comfortable sport seats, which are upholstered in leather that feels a bit rubbery but wrinkles the right way; nice suede inserts are grippy and breathable; and door trim included soft-touch surfaces for elbows. Some other aspects are reminders of how Chrysler has attempted to patch over the DaimlerChrysler days. For instance, the turn signal stalk is low on the left side, with the wiper switch integrated like Mercedes-Benz vehicles, while the cruise control has been relocated to an aftermarket-looking switch on the right side of the steering wheel, its grain of plastic not quite matching the rest. Or put your hand into storage bin just below the climate controls and they're bound to catch a sharp edge.

Thanks to the upright design, there's space for five adults in the 2010 300C (four very comfortably), with plenty of headroom all around and just enough legroom in back. Maneuverability is great thanks to the squared-off corners—it's very easy to place when parking—but rear vision can be a bit restricted from the tall beltline and narrow windows.

So-called infotainment remains a strength of the Chrysler 300 model line. The optional touch-screen navigation system in our SR8 had a nice high-contrast screen, a bird's-eye mode for map displays, and an easy to discern split-screen mode, plus live traffic info. Other optional features on the test car included uconnect phone (Bluetooth), the uconnect studios system with Sirius Backseat TV (covered last week in detail), and the excellent Kicker SRT surround-sound system, including a subwoofer.

Full disclosure: Chrysler provided us a test 2009, rather than 2010, Chrysler 300C SRT8 as the 2010 models are rolling out late this year. For 2010, about the only change is that supplemental side-curtain airbags are no longer optional. For more information on the Chrysler 300C SRT8, check out our overview page on the 2009 Chrysler 300 lineup—including photo galleries, specs, prices, and our Bottom Line—and we'll soon have an updated 2010 review.

The Chrysler 300C SRT8 is a sophisticated performance car that defies its initial impression of being just another big-engine American sedan. Don't call it a relic yet.