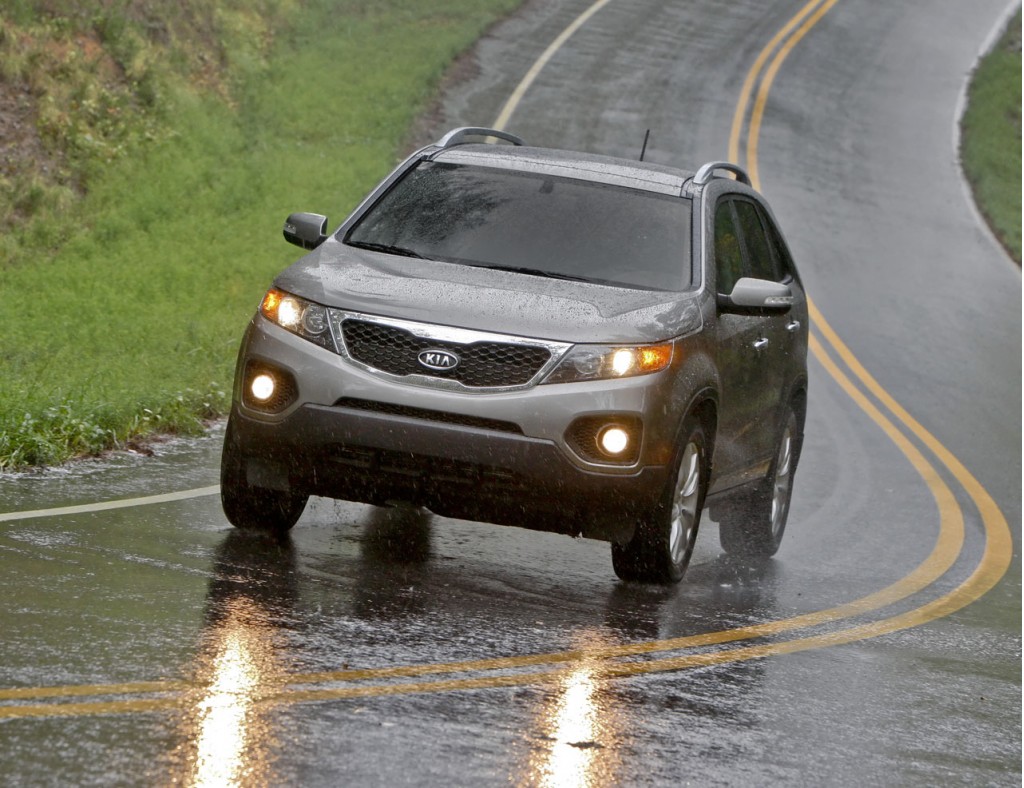 Earlier this week, TheCarConnection was among the first dozen journalists to drive the new 2011 Kia Sorento, a crossover that's sure to cause some heartburn for the Toyota RAV4 and Honda CR-V. Despite some flooding in Georgia that abbreviated the test route, and the availability of only the six-cylinder Sorento, our drive confirmed a few things. Most importantly, that the Sorento's repositioned size and mission cuts across the crossover class in a useful way, and its first-rate execution continues the string of hits that's included the 2010 Kia Soul and 2010 Kia Forte.

The Sorento used to be a frame-rail, truck-based SUV, but no more. Now it's a crossover based on car pieces--and it's a close relative of the current Hyundai Santa Fe, also built in the deep South about 90 miles from the Sorento's new home in West Point, Georgia. For $1 billion, Kia's built a new plant that's set to build 300,000 vehicles a year in the medium term, with the Sorento accounting for a third to half of that volume. (More to come on this later today).

With the new body and new plant, the Sorento has a new task. Bluntly put, it's to take a chunk out of Honda CR-V and Toyota RAV4 sales. To do that, Kia's outfitted it with a choice of four- and six-cylinder engines, which trumps the CR-V's sole four-cylinder. And it's also installing third-row seats on the highest-trim Sorento, which throws down the challenge to the three-row RAV4. In the process, the Sorento tangles with all sorts of crossovers sized and priced vaguely close--the list includes the Ford Edge, the Mazda CX-7, the Chevrolet Equinox, even the Nissan Murano and Toyota Highlander.

On style, the 2011 Sorento makes big gains with a nicely proportioned look that draws on Kia cars for its grille and headlamps, and bigger crossovers for its rear quarters. The Sorento sits lower now, and it's taken on some of the cues from Kia's passenger cars, like the "Schreyer line" named for the chief designer Peter Schreyer, that splits headlamps from its grille. The cabin is defined by a somewhat imposing dash with three big oval gauges and a center stack with a large LCD screen flanked by big vents. It's clean, but the plastics on the dash and doors are hard and have a large grain, and some versions have grey-toned artificial wood that sits at the crossroads of Nice Try Street and No You Really Shouldn't Have Boulevard.

Kia offered us a six-cylinder, automatic-equipped Sorento for our test drive--with four-cylinders in the pipeline for a major media drive next month. We were confined to I-85 thanks to the floods in the Atlanta area, but got enough seat time to confirm the V-6's supple howl, smart passing power and the somewhat slow responses of the Kia homegrown six-speed automatic. A pair of paddles for shifting would be welcome, though there is already a manual-shift mode on the console. Kia promises 20/28 mpg with this combination, which probably makes the four-cylinder's 21/29 mpg  a choice only for the very price-conscious shopper. Ride and handling are softer than the RAV4 and CR-V, with a touch of rumble on rippled interstates, but the Sorento's one of the typically predictable handlers that make crossovers so much better than big, trucky SUVs. It feels failsafe, and the optional all-wheel drive underscores its new emphasis on safety. Kia's predicting five-star safety for the Sorento, but the NHTSA hasn't had one to crash yet.

The general right-sizing of the Sorento means more interior room and a take-it-or-leave-it third-row seat. Front and second-row passengers can be full-sized adults and still not feel cheated; there's Equinox-sized space here, with about a half-inch of headroom for six-footers in back, sitting beneath the new panoramic sunroof. The third-row seat is off-limits for the middle-aged man--the cushion's on the floor, and with reclining second-row seats, it's impossible to see anyone over 12 years old making a willing choice to sit back there. It is flexible for kiddie carpools, though, and the third row folds flat to open up a big cargo space with a decently low cargo floor and a hidden storage space below the floor itself. Initial build quality, particularly from a brand-new vehicle in a brand-new plant, is encouraging.

There's more to come with the Sorento--in fact, we've published our 2011 Kia Sorento Bottom Line while we wait to sample the four-cylinder version. While we toil, you can see a raft of photos and related news over at our 2011 Kia Sorento page. And stay tuned: as soon as we've updated other reviews, we'll pit the Sorento against the RAV4, CR-V, Equinox and CX-7 in a playoff round to find out which crossover's best for you.

TheCarConnection's Bottom Line: The 2011 Kia Sorento takes a right turn in its transition from off-roader to all-weather wagon: it's sized right, timed right, and packaged right.