To celebrate the 50th anniversary of the Insurance Institute for Highway Safety (IIHS), a 1959 Chevrolet Bel Air has been crashed into a 2009 Chevrolet Malibu—in a head-on frontal-offset test, at 40 mph.

The result is not only interesting viewing for our inner gawkers; it's a lesson in how far occupant protection has advanced over the years. 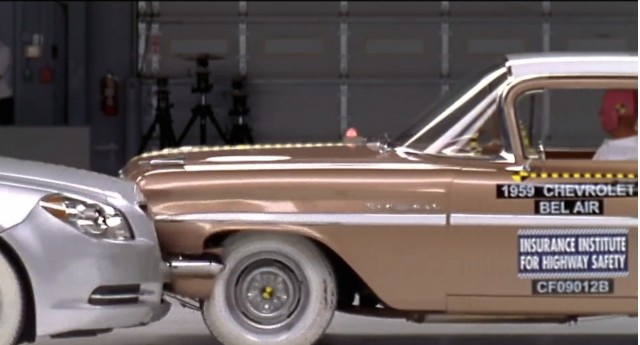 Watching the modern Malibu, the hood area deforms significantly but the passenger area looks almost entirely intact. Shift your eyes over to the 1959 Chevy and it’s the stuff of old highway-safety and shock-and-scare films, just melodrama and implied gore. There’s plenty of car gore though, with the Bel Air’s steering column slammed forward into the driver, the A-pillar completely mangled, and the dash pushed back to finish the punch. Trim pieces fly, shards of non-safety-glass fly forward, and…well, that’s probably enough of a spoiler.

In case there’s any doubt based on the description above, according to safety engineers at the scene, the driver of the 2009 Chevrolet Malibu would likely have suffered slight knee injury. The driver of the 1959 Chevrolet Bel Air would have died instantly.

The Car Connection gives the 2009 Chevrolet Malibu a score of 9 out of 10 in safety; its crash-test results have been excellent, with top five-star results in frontal impact, side impact, and rollover categories from the federal government and top “good” ratings from the IIHS in frontal offset and side-impact categories, blemished only by a “marginal” score in rear impact. The 2010 Chevrolet Malibu continues without any structural or major feature changes, so we expect that its safety scores will carry over.

Check out the video and see exactly how far we’ve come in five decades.