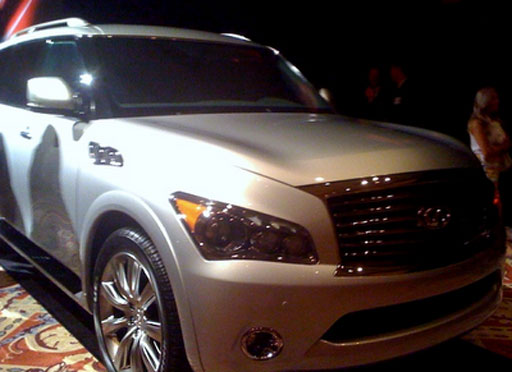 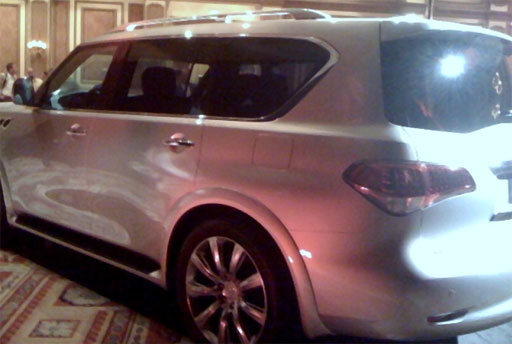 Infiniti has had a series of hits lately with the fantastic-looking G37 Sedan, Coupe and Convertible, and the new 2011 M is shaping up to be a looker, too, but the streak may be coming to an end with these shots of the 2011 Infiniti QX.

Despite its sheer size, the most ready comparisons, aesthetically, are to Nissan's own Cube and Kia's Soul - there are definite notes of both in the vehicle's proportions. On the whole, however, the car doesn't present the grace and harmony of the G37 range.

The previous QX56 was based on the Nissan Armada, but production of those SUVs has ended at Nissan's Mississippi plant, leaving the door open for a replacement. The car tipped to get the job is the Nissan Patrol, historically only sold outside the U.S., but which now seems primed to come as the replacement for both.

Comparing spy photos of the next-gen Patrol over at Motor Authority to these new shots of the 2011 Infiniti QX leave little to the imagination--they are nearly identical except for re-worked D-pillars and different front ends.

Power is expected to come from a V-8 gasoline unit, though a 3.0-liter V-6 diesel engine could also be in the cards, as it's already being prepped for sale outside the U.S.

Designed to compete with the Range Rover series, the new Infiniti QX comes off as more of a Cadillac Escalade rival thanks to its generous chrome grille and bulky yet low-slung stance. It's a bit early to call, however, as these photos are low-quality and from odd angles.

Pricing and availability haven't been announced yet, but it's expected to come along sometime in 2010 as a 2011 model-year vehicle. The outgoing QX56 started at $56,050, so that's a fair guess at a jumping-off point for the next-generation model. That would put it nearly on par with the entry-level Range Rover Sport.