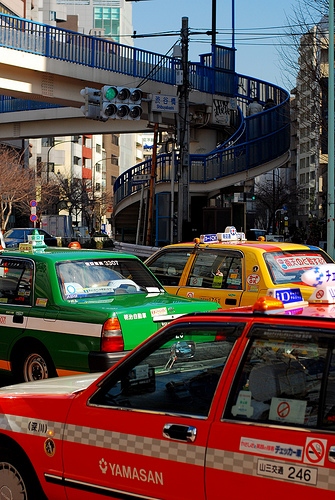 We haven't mentioned Shai Agassi and his outside-the-box startup, Better Place, in some time, but we're happy to report that the man with the battery-swapping plan has been hard at work in the interim, convincing bigwigs in Japan to give his unique system for electric vehicles a test run.

The Better Place pilot program will take place in Tokyo and will center on taxis operated by the city's largest taxi company, Nihon Kotsu. Why the focus on cabs? Because Japan has so many of them -- 60,000 in Tokyo alone -- and although they only make up about 2% of the vehicles on the roadways, they account for 20% of the CO2 generated by automobiles.

Better Place, as you might recall, employs and interesting approach to EVs, organized around battery packs that can be quickly swapped out at Better Place facilities. (Between swaps, they can be recharged like normal EVs.) Based on the press release pasted below, it appears that Tokyo's city government will fund the construction of a Better Place battery swapping station (price tag: $500,000) at a Nihon Kotsu hub in the Roppongi Hills area of town. At the moment, the program is limited to just four taxis, but if things pan out, Agassi might just get a substantial jump on the Japanese EV market, since some of the major players have been a little slow on the draw.

TOKYO--(BUSINESS WIRE)--Better Place today announced that it has received an award from the Japanese government to conduct a pilot project in Tokyo for the world's first electric taxis with switchable batteries. Better Place will partner with Tokyo's largest taxi operator, Nihon Kotsu, in the project commissioned by the Ministry of Economy, Trade, and Industry's Natural Resources and Energy Agency. The project, which comes on the heels of the company's successful battery switch demonstration earlier this year in Yokohama, is slated to begin in January 2010.

"Japan continues to be a leader in automotive engineering and innovation, and the government's funding of Better Place for the world's first battery switchable electric taxis is a testament to the country's commitment to sustainable transportation," said Kiyotaka Fujii, President of Better Place Japan and Head of Business Development for Asia Pacific. "This puts the Better Place battery switch system to use in a real-world application involving heavy-use vehicles that drive much more than the average passenger car. It also enables us to begin to convert taxis to clean, zero emission transportation."

Japanese taxis represent a mere two percent of all passenger vehicles on the road in Japan, yet they emit approximately 20 percent of all carbon dioxide (CO2) from vehicles due to their average distance traveled in a given day. In Tokyo alone, there are approximately 60,000 taxis, a far greater number than in New York, Paris, or Hong Kong. The outcome of the Tokyo pilot program for electric taxis could point to opportunities in other urban centers. Additionally, success within the heavy use taxi industry will help to ensure efficient technology transfer to the mass market, where daily mileage is far less on average.

The electric taxi pilot will showcase the everyday use applications of the Better Place model, and will involve the construction of a Better Place battery switch site at a location in the Roppongi Hills area in Central Tokyo. Up to four newly modified and fully operational electric taxis will be operated from an existing taxi lane for environmentally-friendly vehicles at the Roppongi Hills complex.

Tokyo R&D Co., a specialist in automotive engineering and production, will supply the EVs based on commercially available vehicles with the necessary battery latch mechanisms and switchable batteries. Tokyo R&D also will be involved with building the battery switch site and provide diagnostic software for the pilot.

The vehicles will be put into standard taxi service by the Nihon Kotsu taxi company. Battery switching duration, vehicle range, and battery resistance to degradation will be tested under actual operating conditions.

Better Place, the leading electric vehicle services provider, is accelerating the global transition to sustainable transportation. Better Place is building the infrastructure and intelligent network to deliver a range of services to drivers, enable widespread adoption of electric vehicles, and optimize energy use. The Better Place network addresses historical limitations to adoption by providing unlimited driving range in a convenient and accessible manner. The company works with all parts of the transportation ecosystem, including automakers, battery suppliers, energy companies, and the public sector, to create a compelling solution. Based in California and privately held, Better Place has operating companies in Israel, Denmark, and Australia. More information is available at http://www.betterplace.com.