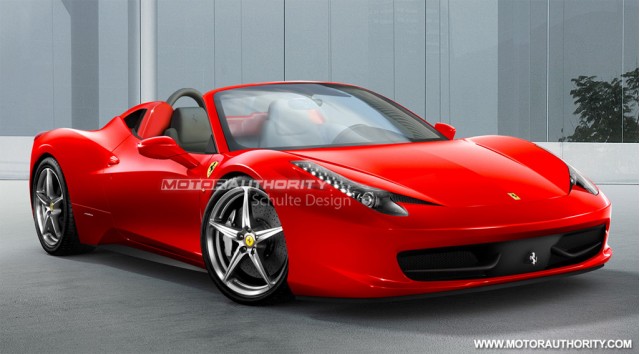 The stunning Ferrari 458 Italia is still fresh from its reveal, but already the slightly mental minds at Motor Authority have dreamed up the car's logical Spider extension, previewed here in these renderings. Mirroring the F430 the 458 Italia is to replace, the Spider version is expected to come along about a year after the coupe hits the roads, meaning sometime in late 2010.

It'll be another few months before the 458 Italia coupe itself takes to full production upon the retirement of the F430, just in time for the 2010 model year. The Spider will accordingly see production as a 2011 model, giving the Prancing Horse marque time to do the voodoo necessary to cut the roof off an otherwise perfectly good Ferrari.

When it does arrive, it will likely shun the folding hardtop of the more laid-back California for a lightweight cloth top more suitable to the 458's fundamentally sporting nature. Keeping the weight down will be the primary mission, since the Spider will likely need some extra internal bracing to maintain sufficient rigidity, pushing it over the coupe's 3,030lb weight.

Power and performance should be near-identical to the already impressive coupe, with the same 4.5-liter V-8 engine rated at 570 horsepower and 400 pound-feet of torque in its mid-mounted position. Power will be sent to the rear wheels through the new 7-speed dual-clutch gearbox.

No official word on the matter has been heard out of Ferrari yet, nor has any speculation begun on the future development of a Scuderia version of both the hard and soft tops, but with Ferrari, it's always a possibility.