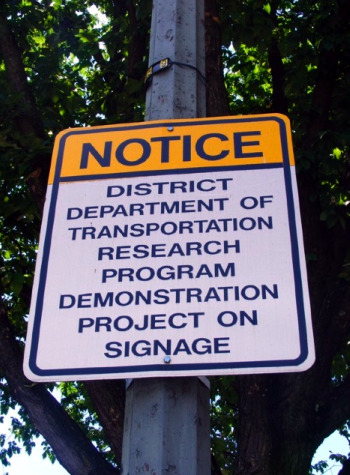 As initimitable Time magazine writer and frequent Tweeter Howard Chua-Eoan said, this sign "speaks for itself, I think."

Courtesy of the DCist.com blog, it turns out that the image was originally sent out by the District of Columbia Department of Transportation on its Twitter feed.

The sign is located, according to numerous commenters on the DCist posting, on New Hampshire between T and U Streets in the District.

The DoT's explanation, in later tweets: "By themselves the signs might seem to serve no purpose, but they really refer to the consolidated parking signs below." Ah, OK, right, sure. Gotcha.

For more detail yet, the Greater Greater Washington blog has a much longer discussion of the DoT's experimental changes to parking-sign graphics in DC. You can read it if you wish.

We prefer to view the sign as performance art, a kind of para-message of meta-commentary on the futility of communications in a 140-character world in which obfuscation is replaced by incomprehension and reductionist theories of interpersonal space are created by multiple personality memes coexisting on different levels of ... [THUD].