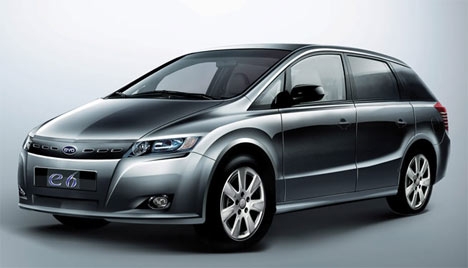 Interesting news from Asia today: Chinese automaker BYD -- the current apple of Warren Buffet's eye -- has revamped its rollout schedule for an all-electric U.S. vehicle. Late last year, BYD said it would launch the car by 2010, but the company recently waffled a bit, pushing back the schedule to 2011. Now the drop date is back on track for sometime in the next calendar year.

Aiming for a 2010 launch is a smart move for BYD. Given that the vehicle -- likely BYD's e6 crossover -- will be the company's first in American showrooms, getting a jump on the EV competition will certainly help bring attention to the automaker. We're guessing that the company also wants to capitalize on the current buzz surrounding electric vehicles, including Nissan's new Leaf, which is dropping next year, too. Sticking to a 2010 schedule will give BYD the head-start it needs to stay on even-footing with the rest of the EV pack, since most other companies aren't planning to release full EVs until later in the next decade.

According to reports, the BYD e6 sounds fairly peppy, with a 0-to-62 mph time of around 10 seconds, and a range of 186 miles on a single charge. The American version is expected to ring in at around $40,000 -- interestingly, the target price for the mostly-electric 2011 Chevrolet Volt. Even though we're two years out, 2011 is already shaping up to be a very interesting year on the lots.