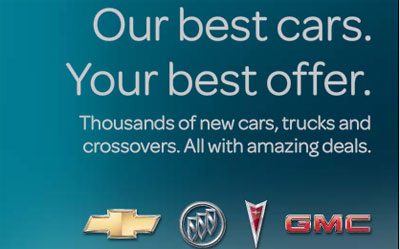 Over 16,228 surplus California dealer vehicles are listed on the General Motors eBay site, but so far only 45 - yes, 45 - have sold in the first nine days of its operation. That's somewhat short of what might have been expected, but GM says it's still too early to judge the program's success.

The eBay deal itself was surrounded in a bit of controversy, with GM announcing it before eBay was satisfied that an agreement had been reached. Once that was smoothed over, however, the GM-branded eBay web site went live without a hitch on August 11th.

Since then, over 630,000 people have visited the site. Considered against the 45 purchases that have been made, that works out to a sale-rate of about 1 in 14,000 visitors.

The numbers may not be all that accurate, however, as some dealers report selling vehicles that were found on eBay, but the buyers came down to the lot to see them in person before making the purchase. As one dealer told Automotive News, "eBay is generating leads. A big part of this is about generating awareness of GM products in the California market."

The program will continue to run through September 8th, by which time GM had hoped to have sold all of the remaining vehicles. Initial sales targets had also been set at about 20,000 vehicles, or about 25% more than the number currently listed on the site.