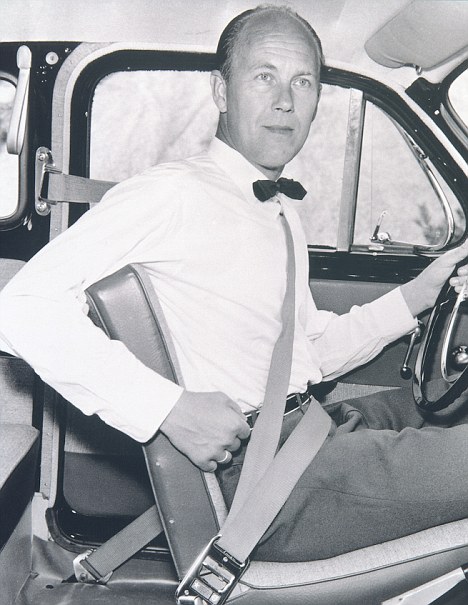 As you get into your car today and buckle your belt without a second thought, pause for a moment. Today is the 50th birthday of the three-point safety belt, an invention that has saved hundreds of thousands of lives globally.

The safety harness, as it used to be called, was created in 1959 by Nils Bohlin. He became Swedish carmaker Volvo's very first safety engineer, after previous work in designing a catapult ejector seat for airplane pilots.

Volvo was the first auto manufacturer in the world to fit three-point belts as standard in all its cars, beginning in 1963. It was so sure of the lifesaving potential of its harness, in fact, that it made the patent available to other carmakers.

At first, seat belts faced a storm of opposition both from automakers--who felt safety wouldn't sell, didn't want to evoke the vision of accidents, and disliked the added cost--and drivers, who worried about being trapped in burning cars or underwater.

But gradually, the data prevailed. Safety experts estimate that seat belts increase your chance of surviving any collision by roughly 50 percent. Wearing a seat belt has now become mandatory in many developed countries.

Even today, virtually every safety feature in a car is designed to work with the three-point belt. Pre-tensioners tighten the belt straps when a collision is imminent, and airbags work best when the occupant is belted in.

So take the time today to pause and appreciate your seat belt. As they say, the life you save may be your own.

Two-thirds of teenagers killed on U.S. roads at night not wearing seatbelts