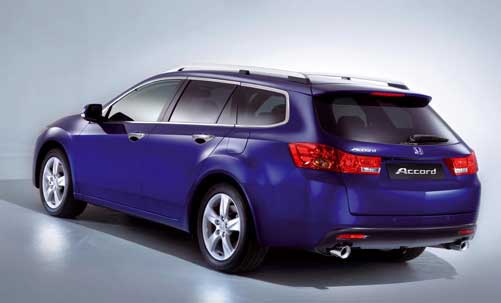 Since the advent of customized vans in the late 1970s -- and subsequently SUVs in the early 1990s -- wagons haven't gotten a lot of attention from consumers. True, many companies continue to produce them, but they typically lack the snazzy, front-page appeal of crossovers and other sporty people-carriers. However, hot on the heels of General Motors' announcement that it's considering a Cadillac CTS-V SportWagon and Mercedes-Benz's official report on its E-Class Wagon comes news that Honda is also looking to try its hand at an upscale wagon -- one badged as an Acura and based on the Acura TSX.

In point of fact, that vehicle already exists: a wagon variant of the TSX is sold elsewhere in the world as a "Honda Accord Touring". So if Honda's marketing data indicates that such a model would prove popular with buyers, we're fairly certain it'll make its way to the U.S. in short order, because the technical hurdles are likely minimal.

This news comes via Acura's senior manager of product planning, John Watts, who proves there's truth to the old adage that what once was old is new again: "Boomers, and [the older among] Gen X, who had wagons as kids don’t want one, but the new kids do."