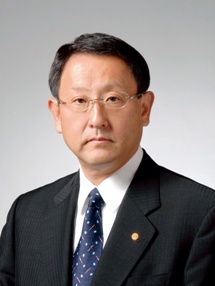 In 2002, Toyota president Fujio Cho set a lofty goal for the company: 15% of the global auto market. The timeline for achieving that goal? Shortly after 2010. However, the Tokyo-based automaker's new president (and scion of the Toyoda family), Akio Toyoda, has set aside that objective, instead prioritizing fiscal responsibility and meeting the needs of consumers.

Toyota has been hit hard by the global economy crunch -- an unusual position for the company, given its decades-long streak of turning profits. Toyota has also suffered from the aggressive efforts of competitors to compete with the company's revered quality and reliability: Ford, for example, is running neck-and-neck with Toyota in recent industry surveys. And some in the company plainly admit that Toyota has relied on making cars that are merely good instead of those that can spark excitement in consumers.

Given that, Toyoda's announcement doesn't really come as a surprise. Still, how much of his decision is savvy business sense and how much is simply saving face in light of the crippled global economy isn't certain. Akio Toyoda came to the helm of the company at a time when Toyota was experiencing its first profit loss since the 1930s, so naturally, cost-saving measures -- like giving up the NUMMI plant in Fremont, California -- have been foremost in his mind. Then too, it's always good policy to provide quality products that customers want. And we all know that blindly chasing numbers at the sake of everything else makes for bad fiscal policy. However, it's equally unlikely that Toyota would abandon a moderately reasonable goal like 15% market share if it were within reach, as it was in 2002 when the goal was set.

Toyota expects to sell 6.6 million vehicles worldwide during its current fiscal year which ends March 31, 2010 -- a significant drop from the 7.57 million vehicles the company sold last fiscal year. Toyota hopes that 2 million of those FY2010 sales will occur in emerging markets like South America and the Middle East -- markets that it sees as crucial in its own rebound.