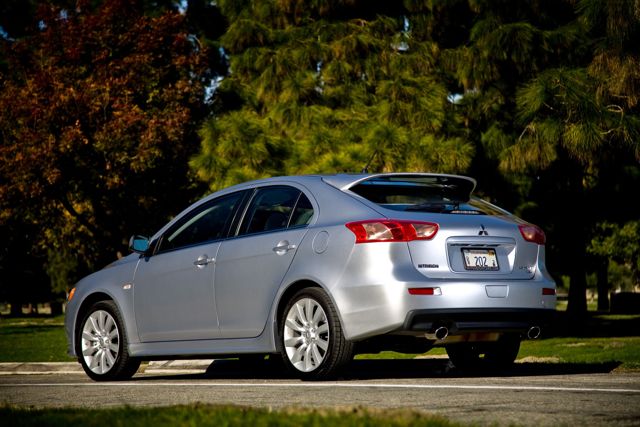 Ever since we first saw Mitsubishi's Concept Sportback at the Frankfurt motor show back in 2005, we've been hoping—along with countless rally-sport enthusiasts—to see a hatchback version of the compact sport sedan come to the U.S. this time around. Well, it's finally (almost) arrived; though the top-performance Evo won't be offered as a Sportback, both the sporty Lancer GTS and affordable-performance Lancer Ralliart will.

In person, we think that the 2010 Sportback Ralliart, just like its chief rival, the Subaru WRX, looks better as a hatch. Quite simply, it has a better sense of proportion

Inside, the Sportback appears a bit roomier than the Subaru Impreza WRX in the cargo area. Versus the sedan, Mitsubishi has lowered the cargo floor by several inches, and the split seatbacks fold forward flat to expand space. Also of note is that the hatch opens down all the way to the bumper, for especially easy loading.

The Sportback Ralliart is a bit heavier than the sedan—the cost of additional bracing around that wide hatchback opening in order to bring the Sportback's structure up to snuff in terms of stiffness. Although we didn't have a sedan to drive back-to-back with the hatchback, it's likely a difference you won't notice.

The Colt and Lancer Ralliart also get upgrades

TheCarConnection.com recently got our first drive in a 2010 Mitsubishi Lancer Sportback Ralliart on some lightly trafficked, well-surfaced high-desert roads, as part of a driving event called Run to the Sun. As with the Ralliart sedan, road noise can be an issue even when the surface is good, and ride quality is tolerable but rather harsh. A simple upgrade of tires might go a long way; versus the Evolution, the Ralliart is saddled with all-season tires that don't allow enough grip to take full advantage of the expert suspension tuning and great body control; on tight corners with smooth pavement surfaces, they start to give way early and vocally.

No manual transmission is offered on the Ralliart Sportback as of yet, but the Twin Clutch gearbox remains a favorite of TheCarConnection.com, pulling off quicker shifts under power than almost any skilled driver would be capable of, while not bringing the fuel-economy penalty in real-world driving that often accompanies traditional automatics. The only hitch with this gearbox that we've noticed is a slight bit of lurching when gradually accelerating in traffic in second and third gear.

As TheCarConnection.com has remarked before in drives of the Ralliart, we like the strong, smooth response of this engine and prefer it in ordinary driving to the peakier one in the Evolution. Boost is almost immediate, and the engine feels happy and responsive from 2500 rpm all the way up; though you'll forgo the Evolution's mad rush of power near redline. Now that the WRX's power output is up to 265 horsepower, and the Sportback Ralliart is more than 200 pounds heavier, there's a power-to-weight deficit.

Overall, there's a lot to love in the Sportback's package, including a lot more practicality without a significant difference in the driving experience versus the sedan. We didn't notice any more road noise or ride harshness than in the Ralliart sedan, but in this respect the Subaru WRX is still the leader, offering surprisingly deft grip and body control without flustering occupants or wearing them down with road noise. The Ralliart trumps the WRX in steering feel, however.

None of the most valued safety features have been omitted from the 2010 Mitsubishi Sportback Ralliart; it includes electronic stability control, front-seat-mounted side airbags, head-curtain bags, and a driver knee airbag are all included. Top options include a 710-watt Rockford Fosgate sound system, Sirius Satellite Radio, a hard-drive-based nav system, and Recaro sport seats.

Visit TheCarConnection.com's overview page on the 2009 Mitsubishi Evolution Ralliart for our definitive Bottom Line that holds true for the new 2010 Sportback Ralliart, along with highlights from other review sources.