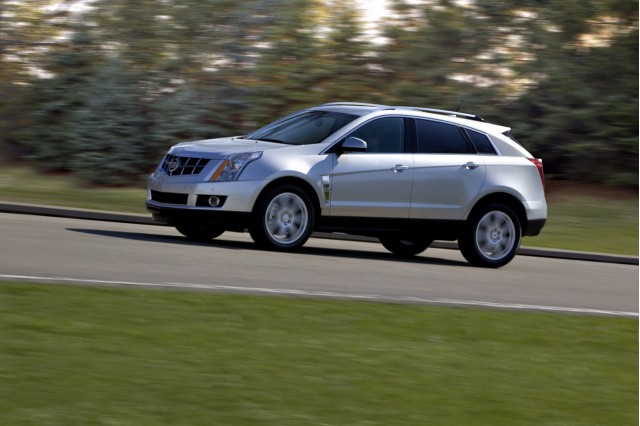 Let's get this straight, out of the gate: there's no Cadillac SRX-V in the works, and even though this car we're looping around GM's Milford Proving Grounds is following in the well-worn tracks of Corvettes, it's not the chest-thumping Corvette challenger that, say, Cadillac's own CTS-V might be.

The 2010 Cadillac SRX Turbo is about top-end appeal--in price and in power.

It's a new niche for Cadillac to explore--both the compact luxury crossover segment, as well as the turbocharging world. The previous crossover from Cadillac was a longer, seven-passenger car with a more awkward silhouette but with an optional V-8 stuffed under its hood.  The new SRX gets smaller, a little leaner, and now it gets forced induction as it gets inducted into a tough, growing market niche, one filled with the likes of the Audi Q5, Volvo XC60, BMW X3 and Mercedes-Benz GLK.

With turbo power, Cadillac hopes to outpace all those entries, while it banks on a sharper shape that's neatly dovetailed the new ute into the GM brand's lineup, right in lockstep with the crisp CTS sedan. It's a family resemblance at most, since the SRX and CTS only share drivetrain parts.

We've shown you the standard 2010 Cadillac SRX before--and with a preliminary rating of 8.6 out of 10, the SRX is the top-rated crossover in the luxury class, even before its new boosted engine arrived on the scene. And since we've covered those basics, let's talk turbocharging. The stock SRX arrives in showrooms with a 3.0-liter V-6 engine with 265 horsepower, 223 pound-feet of torque, and direct injection. All said and done, and coupled to a six-speed automatic transmission, the 2010 SRX hits 60 mph from a standstill in about 8.5 seconds and consumes unleaded gas at a rate of 18/25 mpg. The power's ample, and a little peaky, with top output arriving near the 5000-rpm mark.

By dropping the displacement 0.2 liters and adding a turbocharger--a formula that's worked for the same engine in the Saab 9-3 lineup--the 2010 SRX gets a flatter, higher power curve that pushes it briskly and easily around the yaw-inducing moments at the GM proving grounds. Total horsepower rises to 300 hp, with 295 pound-feet of torque. Cadillac estimates 0-60 mph times drop to the mid-7-second range with the new engine. First and most noticeable, as we rumble on the GM test track, is the engine's lack of a distinct turbo whistle or wastegate noise; where some boosted engines make their add-ons clearly heard, this turbo V-6 damps out the distinctions, leaving only a swifter pace behind.

Like the other SRXs, the transmission here also is a six-speed automatic, and is without the paddle shifters available in the Cadillac CTS. It does offer some changeable driving modes: in Sport mode it holds gears longer and tightens steering and shift points, while in Eco mode the SRX Turbo's throttle is remapped and upshifts come more quickly to conserve fuel. In Eco mode, engineers report a 1-mpg increase in fuel economy, though since the EPA averages the Eco mode with steady-state driving, the Turbo's fuel economy ratings are still rated at 16/23 mpg. That's still competitive with the Q5, GLK and X3, none of which comes close to the SRX Turbo's power output.The SRX Turbo also tows 3500 pounds.

Other than the engine, the SRX Turbo is essentially similar to high-line models in the lineup. Aside from drivetrain differences, it shares its Haldex all-wheel-drive system, "FE3" suspension settings and Continuous Damping Control (CDC) with the most expensive non-turbo SRXs. The CDC system is one of those noticeable upgrades that feels digital in its operation, but also results in smoother ride and handling feel, even with 20-inch wheels. In our opinion, the 2010 SRX has some of the best steering and ride feel in this class--it's more akin to a sport sedan than what you'd experience in many other crossovers, including the Lexus RX350 that Cadillac pegs as another prime competitor.

Our objections with any of the 2010 Cadillac SRX crossovers are few. If you don't care for its highly stylized shape and wide-ranging use of metallic plastic inside, you're out of luck--and you're in a minority. Pricing is appropriately rich, for better or worse. The SRX Turbo runs just under $50,000, essentially $3000 more than a well-optioned, non-turbo SRX. At least there are precious few boxes to tick on the order form; once you've selected the all-wheel-drive SRX, you opt for the turbo engine, then add on chrome wheels, heated seats and an entertainment system if you like. With those additions, a $55,000 sticker price is easily within reach, though, higher even than the Audi Q5 and BMW X3 our editors recently sampled.

Sales of the turbocharged SRX begin in October, while the non-turbo 2010 Cadillac SRX is available now. You can read our road test and see photos, specifications and other information on our 2010 Cadillac SRX page right now; stay tuned for a full review of other opinions from around the Web, too.

Cruise the High Gear Media network! Click over to TheCarConnection for experts reviews of every new vehicle; MotorAuthority for luxury and performance-car news, reviews, and spy shots; GreenCarReports for news and reviews of the latest earth-friendly cars; and CelebsandCars to see how the stars roll.