Obama And The DOE Award $2.4 Billion In Battery Grants 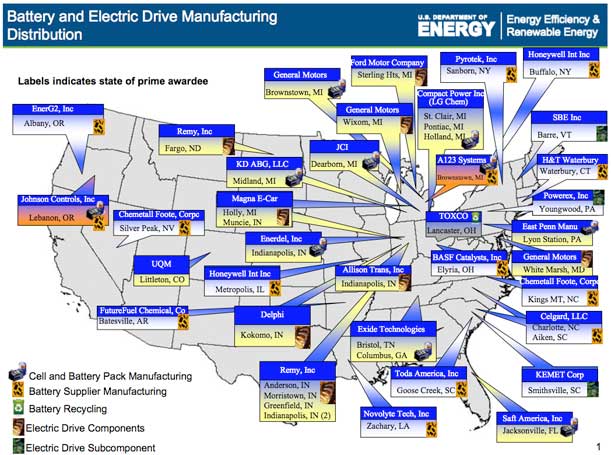 Yesterday, President Obama announced $2.4 billion in technology grants to car companies, battery makers, universities, and research facilities across the U.S. During his speech in Elkhart, Indiana, the president stressed the importance of battery development as a way of reviving America's manufacturing sector and reducing the country's dependence on foreign oil. Vice President Joe Biden and several members of the president's cabinet also unveiled grant awards at various sites around the country.

These announcements have been some time in coming. The grant funds were included in the $787 billion stimulus package created by the federal government in February of this year. In all, 48 of the 122 grant applicants received funding, representing organizations in 25 states across the country.

Of the funds distributed, approximately $240 million went to General Motors, which will be the first of Detroit's Big Three to release an extended-range EV when it launches the Chevy Volt. Ford and Chrysler also received large pieces of the battery pie at $100 million and $70 million, respectively.

For a fuller report, check out our sister site, Green Car Reports. You might also enjoy skimming out the DOE's scintillating press release, pasted below.

President Obama Announces $2.4 Billion in Grants to Accelerate the Manufacturing and Deployment of the Next Generation of U.S. Batteries and Electric Vehicles

Elkhart, Indiana - Further accelerating the manufacturing and deployment of electric vehicles, batteries, and components here in America, and creating tens of thousands of new jobs, President Obama today announced 48 new advanced battery and electric drive projects that will receive $2.4 billion in funding under the American Recovery and Reinvestment Act. These projects, selected through a highly competitive process by the Department of Energy, will accelerate the development of U.S. manufacturing capacity for batteries and electric drive components as well as the deployment of electric drive vehicles, helping to establish American leadership in creating the next generation of advanced vehicles.

"If we want to reduce our dependence on oil, put Americans back to work and reassert our manufacturing sector as one of the greatest in the world, we must produce the advanced, efficient vehicles of the future," said President Obama.

"For our nation and our economy to recover, we must have a vision for what can be built here in the future - and then we need to invest in that vision," said Vice President Biden. "That's what we're doing today and that's what this Recovery Act is about."

“These are incredibly effective investments that will come back to us many times over – by creating jobs, reducing our dependence on foreign oil, cleaning up the air we breathe, and combating climate change,” said Energy Secretary Steven Chu. “They will help achieve the President’s goal of putting one million plug-in hybrid vehicles on the road by 2015. And, most importantly, they will launch an advanced battery industry in America and make our auto industry cleaner and more competitive.”

The announcement marks the single largest investment in advanced battery technology for hybrid and electric-drive vehicles ever made. Industry officials expect that this $2.4 billion investment, coupled with another $2.4 billion in cost share from the award winners, will result directly in the creation tens of thousands of manufacturing jobs in the U.S. battery and auto industries.

Today, President Obama visited Navistar International Corporation, in Elkhart, Ind., to make the announcement. Navistar will receive a $39 million grant to manufacture electric trucks which the company reports will ultimately will create or save hundreds of jobs when full scale manufacturing at the site commences. Overall, seven projects in Indiana will receive grants totaling more than $400 million. The applications from the companies and from one university engaged in this technology research anticipate that these awards will create or save thousands of jobs.

Vice President Joe Biden and four Members of the Cabinet also fanned out across the country to discuss the historic announcement.

Vice President Biden was in Detroit to announce over $1 billion in grants to companies and universities based in Michigan. Reflecting the state's leadership in clean energy manufacturing, Michigan companies and institutions are receiving the largest share of grant funding of any state. Two companies, A123 and Johnson Controls, will receive a total of approximately $550 million to establish a manufacturing base in the state for advanced batteries, and two others, Compact Power and Dow Kokam, will receive a total of over $300 million for manufacturing battery cells and materials. Large automakers based in Michigan, including GM, Chrysler, and Ford, will receive a total of more than $400 million to manufacture thousands of advanced hybrid and electric vehicles as well as batteries and electric drive components. And three educational institutions in Michigan, the University of Michigan, Wayne State University in Detroit, and Michigan Technological University in Houghton in the Upper Peninsula, will receive a total of more than $10 million for education and workforce training programs to train researchers, technicians and service providers, and to conduct consumer research to accelerate the transition towards advanced vehicles and batteries.

Energy Secretary Steven Chu, whose Department selected the 48 award winners, visited Celgard, in Charlotte, NC, to announce a $49 million grant for the company to expand its separator production capacity to serve the expected increased demand for lithium-ion batteries from manufacturing facilities in the U.S. Celgard will be expanding its manufacturing capacity in Charlotte, NC and nearby Aiken, SC, and the company expects the new separator production to come online in 2010. Celgard expects that approximately hundreds of jobs could be created, with the first of those jobs beginning as early as fall 2009.

EPA Administrator Lisa Jackson was in St. Petersburg, FL, to announce a $95.5 million grant for Saft America, Inc. to construct a new plant in Jacksonville on the site of the former Cecil Field military base, to manufacture lithium-ion cells, modules and battery packs for military, industrial, and agricultural vehicles.

Deputy Secretary of the Department of Transportation John Porcari visited East Penn Manufacturing Co., in Lyon Station, Penn., to award the company a $32.5 million grant to increase production capacity for their valve regulated lead-acid batteries and the UltraBattery, a lead-acid battery combined with a carbon supercapacitor, for micro and mild hybrid applications. East Penn Manufacturing is a third-generation family business with over 63 years in battery manufacturing.

Commerce Secretary Gary Locke visited Kansas City, Missouri, to announce a $10 million grant for Smith Electric to build and deploy up to 100 electric vehicles, including vans, pickups, and their "Newton" brand medium duty trucks. In addition, Secretary Locke announced three other grants supporting manufacturing and educational programs in Missouri: a $30 million grant to Ford Motor Company supporting the manufacturing of plug-in hybrid electric vehicles in Kansas City and in Michigan; and a $5 million grant to Missouri University of Science and Technology, in Rolla, Missouri, to fund educational and workforce training programs on advanced vehicles technologies.