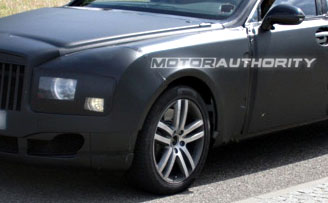 The 2010 "grand Bentley" that will replace the Arnage has been spotted by spy photographers over at our partner site, MotorAuthority.com.

The new sedan is scheduled for a world debut at the 2009 Pebble Beach Concours next month, but several preview photos have been revealed--along with some pictures taken from deep within a Bentley workshop.

The new car is expected to grow in size and stature; it may in fact be pitched as a head-on competitor for the Rolls-Royce Phantom sedan, though with a more sporting character.

At the same time, Rolls-Royce is planning a smaller Ghost sedan that will directly challenge the popular Bentley Continental range of coupes and sedans.

The new “Project Kimberly” Bentley sedan is said to be based off a heavily revised version of Audi’s modular platform. The new Arnage replacement will have a unique V-8 powertrain, rear-wheel drive, and an eight-speed automatic. Supercharging or twin-turbocharging is likely, with a final power output of about 550 hp in the works.

There's some chatter that the new car will share some structures with the upcoming Bugatti Royale sedan, and its W-16 quad-turbocharged engine. There's no confirmation on any technical details; Bugatti will in fact keep its new concept car off the Frankfurt auto show stage.

We'll be on the Frankfurt show floor and at Pebble Beach to bring you the latest from Bentley, Bugatti and Audi -- stay tuned.