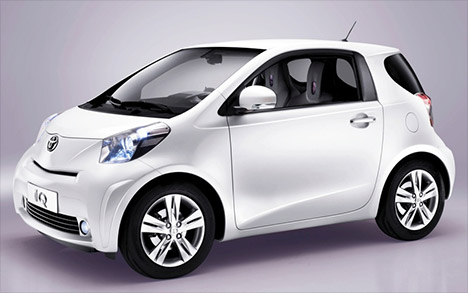 Toyota's iQ is a popular guy these days. A couple of weeks ago, we mentioned that the iQ will serve as the base for Aston Martin's first foray into the citycar segment. (In fact, Aston Martin likes the iQ so much they're not touching anything under the hood.) And now comes word that after many years of success with hybrids like the Prius, Toyota's first all-electric vehicle will be based on the iQ.

According to reports, the amped and revamped iQ will launch in 2010. At the moment, it doesn't appear that the iQ EV will arrive as a simple iQ variant; instead, Toyota will give it a unique identity via some signature styling. According to the model's chief engineer, Hiroki Nakajima, the regular iQ will be getting some premium upgrades ("A lot of buyers think it is much too plasticky"), the implication being that the iQ EV will be more run-of-the-mill, with no-frills. In short, it sounds as if it's targeted at a slightly different market segment than its combustion-powered siblings.

The arrival of the iQ EV will follow on the heels of Toyota's testing of plug-in Priuses later this year, which should provide practical information about EV consumers, charging habits, and charge times for lithium-ion batteries. Charge time for the iQ EV is said to be approximately 8 hours.

Of course, whether the electric iQ will make it to the U.S. is another matter altogether. So far as we know, Toyota hasn't officially decided to bring the regular iQ stateside (under the Scion brand), so introducing a fully electrified option seems even more vexed -- and remote.