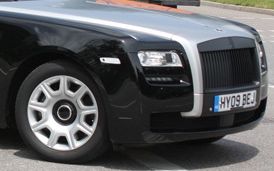 High performance probably isn't the first thing that pops into your mind when you think Rolls-Royce, but that's only because the marque's performance is overshadowed by its extreme luxury and old-world styling. The new 2010 Rolls-Royce Ghost may overcome that hurdle, however, with its fresher design and brawny engine.

Rolls released the performance specifications for its new entry-level car today, revealing that the 6.6-liter turbocharged V-12 will be rated at 563 horsepower and 575 pound-feet of torque. Piped through a ZF eight-speed automatic for smooth acceleration, the Ghost will dash to 60 mph in 4.7 seconds and on to a top speed of 155 mph.

That's a pretty impressive set of numbers given that even though the Ghost is the 'entry' Rolls-Royce, it's still a large car. At over 17.5 feet long, nearly 7 feet wide and just over 5 feet tall, it's smaller than the Phantom, but bigger than most other cars on the road. Though the car has only been seen in spy photos so far, it will look almost exactly like the 200EX Concept shown at the 2009 Geneva Motor Show.

The new Ghost will also get an advanced four-corner air suspension system paired with an all-aluminum multilink front and rear suspension for a Rolls-Royce-appropriate combination of handling and ride quality. Combined with a new chassis management system and dynamic anti-roll stabilization, the new Ghost is sure to be the driver's choice among the Rolls-Royce line.