Connect with our dealer and finance partners through our site and ask for details regarding their at-home car buying services.
OK
HomeNewsSedans 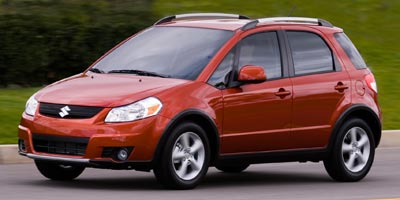 Either as a five-door hatchback or a four-door sedan, Suzuki's SX4 is a well-packaged, well-equipped small car and surprisingly enjoyable to drive. TheCarConnection.com especially likes its hatchback model, called the SX4 Crossover, and points to its quiet interior, sporty driving feel, and maneuverability as strengths in our Bottom Line on the 2009 Suzuki SX4.

But the SX4 lineup until now has been a bit odd and limited. The conservative-looking sedan is only offered with front-wheel drive, while the sportier-looking hatchback body style is only offered with all-wheel-drive (and its lower fuel-economy numbers), in Outback-style SX4 Crossover trim.

That's due to change for 2010, when Suzuki is bringing out a front-wheel-drive SX4 SportBack model of its SX4. The 2010 Suzuki SX4 SportBack, only offered in Touring trim, brings the sportier tuning and lower ride height of the sedan, and forgoes the roof rack, taking on an Aero body package instead.

Look for a bump up to 150 horsepower for the 2.0-liter four-cylinder engine, along with some other more significant powertrain and equipment upgrades, for the entire SX4 lineup. We'll bring the rest on the SX4 along with Suzuki's other 2010 models in just a few weeks.